Voice recorder, microphone, and 4 dayplanners as evidence. Prosecutor asked for 2 years of prison for Andreyeva and Chultsova

February 17, the trial of Belsat journalists Daria Chultsova and Katsiaryna Andreyeva is under way. Hearing of arguments and the last statement of the defendants are expected today. 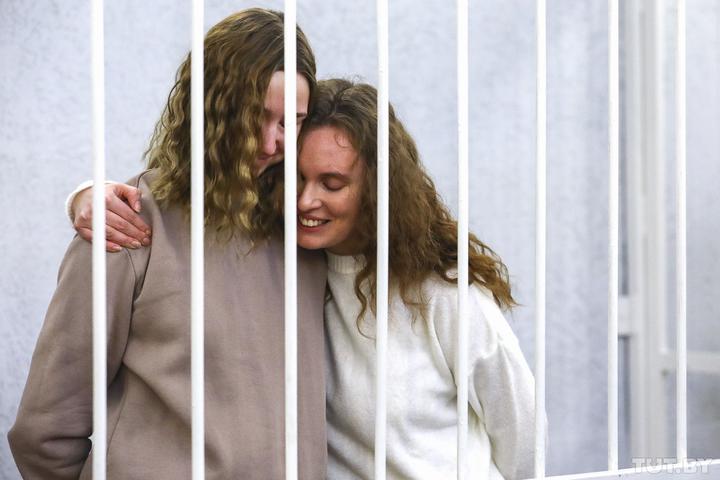 After the break, the judge announced the decision: since the damage to Minsktrans was fully reimbursed, and the company has no claims, the court decided to dismiss the civil case.

Then the court continued to examine the evidence in the criminal case. A large black bag and a box were brought into the courtroom, and State Prosecutor Alina Kasyanchyk presented their contents. According to the explanatory note, there were evidentiary items in the bag: mobile phones, computers, flash drives, a player, a voice recorder, four dayplanners, paper records, a microphone, a power bank, a transmitter, a tripod, a blue Press vest, a video camera, and cords of different colors. 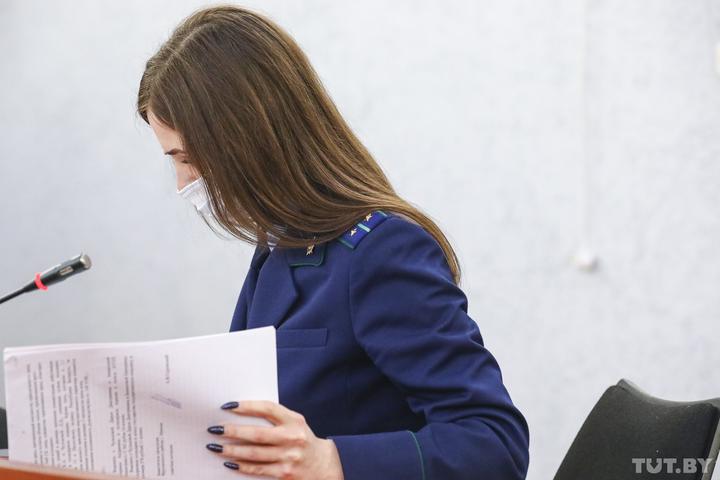 There were also a piece of white-red-white fabric and various stickers, prosecutor Alina Kasyanchyk said.

What happened during the second session, on February 16?

Dozens of people, including journalists from various media outlets, waited in the corridor and on the stairs of the court for more than three hours. The guys in civil clothes continued to claim there were no seats in the courtroom.

According to Ihar Ilyash, the husband of Katsiaryna Andreyeva (Bakhvalava), the courtroom was about half full. Only lawyers, close family, representatives of diplomatic missions and four journalists from two state TV channels were allowed to come in.

At the hearing, they watched fragments from the video streamed on November 15 from an apartment in one of the buildings on the "Square of Changes". The defense insisted on viewing the entire recording, but judge Natalia Buhuk decided to view only fragments "for procedural effectiveness." These 12 fragments formed the basis of the accusation. All quotes are reportedly only statements of facts. There was only one call to the viewers -- "we urge you to be careful"

Also, the court summoned Minsktrans representative Raman Pranovich, again. Since the families of the journalists paid the damages — more than 11,000 BYN, the transportation company dropped its civil claim against the journalists.

What happened during the first session, on February 9?

According to the investigation, on 15 November “motivated by greed" and "by prior agreement" with each other and other unidentified persons, they organized actions that grossly violate public order. Namely, they voiced information on the air, including "from destructive accounts in social networks", "gave a positive assessment" of the events taking place and "gathered active participants who grossly violated public order", "in order to gather the crowd that could possibly counter the actions of law enforcement officers".

The crime, the prosecution says, was committed with the help of phones, video cameras, a tripod and Press vests.

According to the investigation, the Belsat stream led to the shutdown of 19 public transport routes — 13 bus, 4 trolleybus and 4 tram routes. Minsktrans estimated the damage at 11,562.14 BYN. The journalists transferred this amount to the company's account.

.Daria Chultsova refused to testify, so written case materials were read out during the trial.

— I did not call anyone to anything, did not organize anything, and did not incline anyone to action. There is no evidence of illegal actions in the case materials, no explanation of what destructive Telegram channels are, and who determined that they are destructive and which exactly channels are meant.  I didn't shout any slogans, I didn't go out on the roadway. <...> My agreement to pay the damage to Minsktrans does not mean I admit the guilt. Payment of damages confirms that I am a decent person, and gives me an opportunity to do this for the benefit of the company in order to improve the quality of services.

— I am absolutely innocent of the crime that I am accused of, - Katsiaryna stated in the beginning. — I consider it an act of revenge by the special services for my professional activities.

Katsiaryna says, she did not guide people during her livestream. She said she could not possibly do it as there was no mobile Internet in the "Square of Changes", so the people there could not watch Belsat stream.