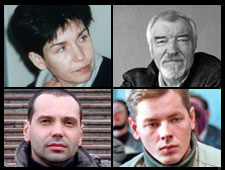 Correspondent of the Solidarity newspaper, Veranika Charkasava was stabbed at home on October 20, 2004. No money or other valuable goods were missing. Shortly before her death, Charkasova was investigating the alleged arms sales between Belarus and Iraq, as well as a money-laundering scheme. Since the only items missing from her apartment after the murder were pictures she had taken during her trip to Iraq, it is suspected that her death might be related to her investigation into the arms sale. Human rights organisations such as the Committee to Protect Journalists and Human Rights Watch, and inter-governmental organisations such as the Council of Europe, have criticised the Belarusian government failing to investigate the murder. In particular, there has never been an investigation into a possible link between her work and the murder, as the focus of the criminal investigation was limited to a domestic dispute – the only suspects were her family members. Now, the case has been suspended, through a failure to identify a suspect.

Before his death, Vasil Hrodnikau worked as a non-staff correspondent of the newspaper Narodnaya Volya. The journalist was found dead in the morning on October 18, 2015 in his private house situated in Zaslaul (near Minsk). The walls in the house were covered with blood; bloodstains were on the walls in many rooms. There were broken window in the kitchen, a stool’s leg was broken, cereals and matches were scattered on the floor. Money and valuables remained in the house.

Forensic medical examination said that V. Hrodnikau had died in the result of craniocerebral injury on the head with a blunt object. In spite of many suspicious facts, the Regional Prosecutor’s Office of Minsk declared that Hrodnikau died in a domestic injury. The Prosecutor’s Office of the Republic of Belarus supported the decision saying that there was no corpus delicti in the case. Colleagues and relatives who say the place of death said it looked like a crime scene, and criminal investigation should have started. They assume the motive for the alleged death could be a series of reports that the journalist had written before his death.

Founder and editor of the website Charter’97, Aleh Byabenin died under suspicious circumstances. On 3 September 2010, he was found by his brother and his friends hanging from the stairway of his village house outside of Minsk.  The authorities claimed that an autopsy established that Byabenin had committed suicide. The investigation stated that no marks of violence were found on the body, which has been contradicted by his family. No suicide note was found. Investigation was prolonged several times, but finally no criminal case was initiated. The invited OSCE experts confirmed the official version, but underlined that they had a possibility only to review the materials of the investigation held by the authorities. The family and friends insist that the death was violent; they emphasized that Byabenin was a member of the electoral team of the candidate Andrei Sannikau. Some journalists who publicly voiced their doubts about the suicide, received threats.

Punishing the Criminals is a Matter of Time

On May 7, a documentary Banda was presented in Minsk dedicated to abductions of some politicians and the journalist Dzmitry Zavadski in 1999-2000.

On October 20, 2011 it’s been seven years since Veranika Charkasava, Belarusian independent journalist, was stabbed to death in her Minsk apartment.

Vasil Hrodnikau, freelance journalist of the independent newspaper “Narodnaya Volia”, was found dead in his house in Zaslauye in October 2005.