Two Books by Pazniak Claimed to Be Extremist

The expert commission of the Brest region held an assessment of three books authored by Zianon Pazniak and claimed that two of them contained signs of extremism; the commission applied to the Maskouski district court of Brest to recognize the books extremist and to ban them.

The books under consideration are Abarona Kurapataŭ. Narodny Memaryjal (Defence of Kurapaty. People’s Memorial) (authored jointly by Zianon Pazniak and Valery Bujval); Dobraja Phatagraphija (Good Photography); Sesija Nezaležnasci (Session of Independence). Two books of each title were seized from Aleś Čacholski, an activist of the Conservative Christian Party of the BPF. Now the activist is under trial according to art. 17.1 – storage and distribution of extremist literature. He was summoned to court on November 26, but the hearing was postponed, the police report has been sent for completion. Meanwhile, the activist tries to find the conclusions of the examination of the books by the regional expert commission. The reply from the Brest customs office says that the books Good Photography and Defence of Kurapaty. People’s Memorial have been arrested, according to the Law on Counteraction to Extremism, art. 14. The book Session of Independence contains no signs of extremism, so the owner can pick them up at the Brest customs office. 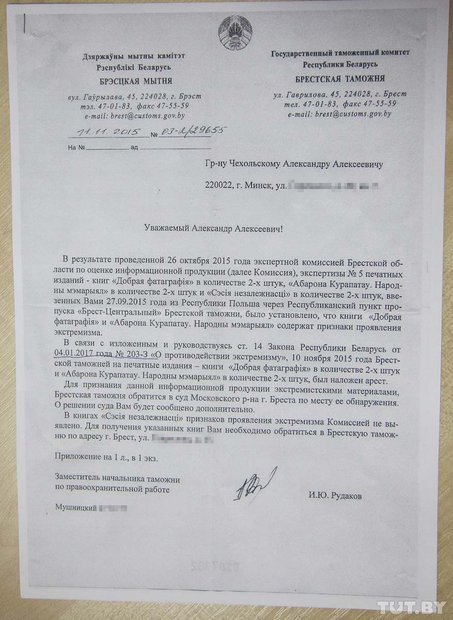 Zianon Pazniak is a politician, leader of National movement in Belarus, founder of the Belarusian People’s Front, one of main opponents to Lukashenka in mid 90ies, lives in emigration since 1996.