TUT.BY journalist Lyubov Kasperovich is being examined in the Moskovsky District Court. She is accused of participating in an unsanctioned mass event.

Judge Sergei Katser found the journalist guilty and sentenced her to 15 days of arrest. 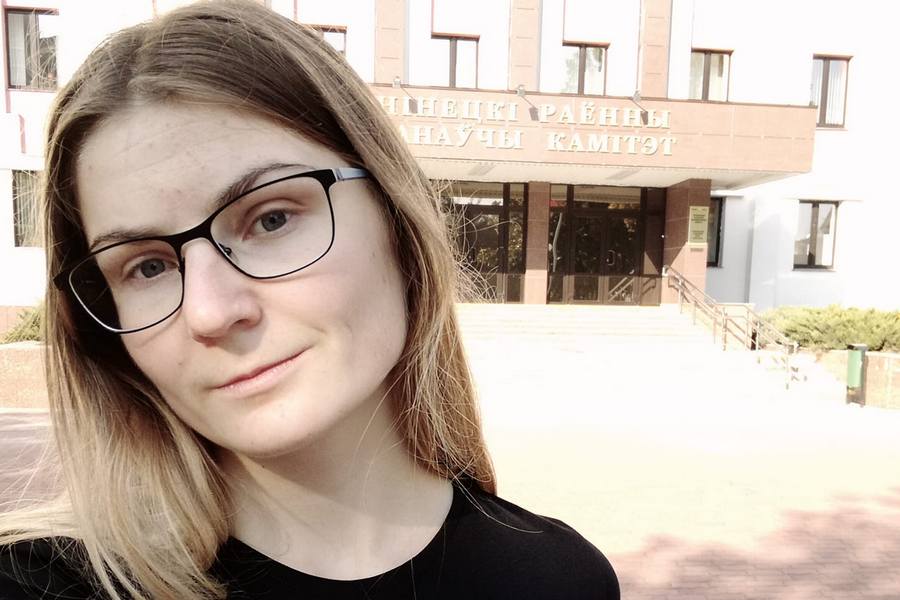 The case is being considered by judge Sergei Katser. Lubov is questioned remotely via video link. Katser reads out that Lyubov is accused of participating in an unauthorized mass event – Part 1 of Art. 24.23 Administrative Code. The journalist immediately notes that another trial is taking place next to her – ex-chairman of the United Civil Party Anatoly Lebedko is being tried, so she can barely hear what the judge is saying.

The judge repeats his questions, reads out her rights. Kasperovich makes her first petition: 72 hours after her arrest ends 10 minutes later, and she still does not know the reason for her detention and why she is in a temporary detention facility on Okrestin Street in Minsk. She asks to familiarize herself with the report of detention and charges.

“This is the first time I hear from you what I am accused of,” the journalist said to the judge.

“It’s a lie. When they searched my belongings, fire hours after the arrest, I made a note in the report that they did not explain to me why I was arrested,” said Kasperovich.

Judge Katser rejected the journalist’s petition, she would not be able to get familiarized with the report. Kasperovich makes another petition – to talk to lawyer Andrei Mochalov. The defence attorney also files a motion – to talk to his client, the court grants it but gives only 7 minutes. All present is asked to leave the courtroom, except for the lawyer and the judge’s secretary.

After talking with the journalist, lawyer Mochalov asks the judge to give him time to get familiarize himself with the case. The judge grants the petition, the court breaks until 11.40 am. Recall that on Monday, 17 May, the journalist’s detention expires at about 11.15, that is, Lyubov must either be released or convicted before that time.

After rejecting at least three lawyer’s petitions, the judge reads out the report: on 14 May from 10.10 am to no later than 10.40 Lyubov Kasperovich was picketing. She was at the main entrance to the House of Justice on Semashko, 33, where, as part of a group of citizens who gathered to express their political views and attitude to the trial, taking place in the House of Justice, she took part in an unauthorized mass event.

I absolutely do not plead guilty,” said Lyubov Kasperovich.

Lyubov Kasperovich was detained while performing her professional duties on 14 May at the House of Justice in Minsk, where the trial in the “students case” was being held. At least 100 people gathered near the courthouse, wishing to support the students: their relatives, friends, and caring Belarusians. Almost no one was allowed into the courtroom, and the police asked the people who were near the building to disperse, and later the arrests began. Among the detainees was Lyubov Kasperovich, who was taken to the police department of the Moskovsky district.

Before the arrest, Lyubov interviewed friends of one of the accused – she fulfilled her professional duties, preparing a report.

“We were talking, when suddenly someone shouted: ‘OMON!’ We saw people in black running towards us and we started to run away from them. The TUT.BY journalist stumbled and fell, the riot police rushed at her,” eyewitnesses of the events told TUT.BY.

Late in the evening, some of the detained students were released from the police department with reports. Their trial will take place on Wednesday, 19 May. Lyubov was taken to a detention centre on Okrestin Street. Our colleague spent the weekend there, a lawyer was not allowed to visit her. Kasperovich’s case was presumably to be considered on Saturday, 15 May. But for the whole day, the materials of the case were not transferred to the court from the police department. Our colleague spent the whole weekend at Okrestin Street.

Currently, 16 media representatives are behind bars. Today in Mogilev, the court sentenced Alexander Burakov and Vladimir Laptsevich to 20 days of administrative arrests, who were detained three days ago at the courthouse, where even the relatives of the defendants were not allowed to the trial of Pavel Severinets and activists of the “European Belarus”. Earlier photographer Tatiana Kapitonova was sentenced to 10 days in jail for taking photos of the women’s rally.

Three journalists are serving a criminal sentence: Katerina Andreeva and Darya Chultsova from Belsat were sentenced to two years in prison for a live stream from action in memory of Roman Bondarenko, Katerina Borisevich, sentenced to six months in prison for an article that Roman Bondarenko was sober, is to be released next week. Representatives of the Press Club, journalists Ksenia Lutskina and Andrey Pochobut, media manager Andrei Alexandrov are awaiting trial in the pre-trial detention centre.