Silnye Novosti journalist Nadzeya Puzhynskaya to serve 14 days of jail. Her trial was not announced to public

In Homel, journalist of the local portal Silnye Novosti (Strong News) was tried. However, neither her family, not colleagues who had been keeping vigil in the court building for two days, were able to come to her trial.  Nadzeya Puzhynskaya was sentenced to 14 days of jail. 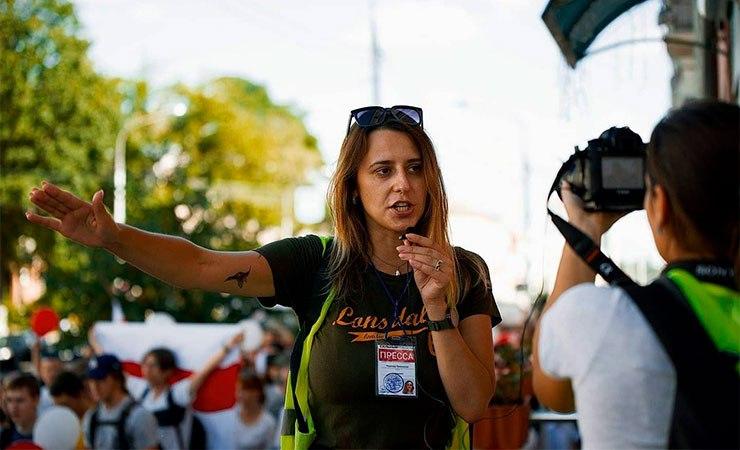 On Saturday, October 3, Homel police detained editor-in-chief of Silnye Novosti Anna Yakshtas and her husband Dzianis, who also works in the media outlet.  Nadzeya Puzhynskaya, together with Dianis' family arrived at the detention center to bring a care package for her colleagues.

"Someone called her, and she stepped aside and disappeared. Later she called from a police station to inform that she was in Sovetski police department.  Then we learned that Nadzeya was detained under article 23.34 of the Administrative code (Violation of the order of organizing or holding mass events)," owner of the portal Piotr Kuzniatsou said earlier.

Nobody knew what exactly she was charged with.

Today, on October 6, Nadzeya was tried. We don't know how and where the court session was held.  Nadzeya's mother told the news to Silnye Novosti: She got a phone call from her daughter who said she had received 14 days of jail. The journalists who stayed in the court building since early morning, could not find information about the hearing.

Anna Yakshtas was given a fine of 20 base values today. She has underaged children, and can't serve administrative jail terms by law.

Dzianis Yakshtas was sentenced to 15 days of jail yesterday.