Report: Women journalists are frontline warriors at the protests and in prisons in Belarus

Amidst all these censorship and harassment tactics the women journalists are risking their lives when they cover the protests and report on the state’s atrocities from the frontlines. Many women journalists have been detained and forced to stay silent. In detentions, they suffer assaults at the hands of authorities. Some of the excruciating details of the tortures in these detention centers were also exposed by the women journalists. 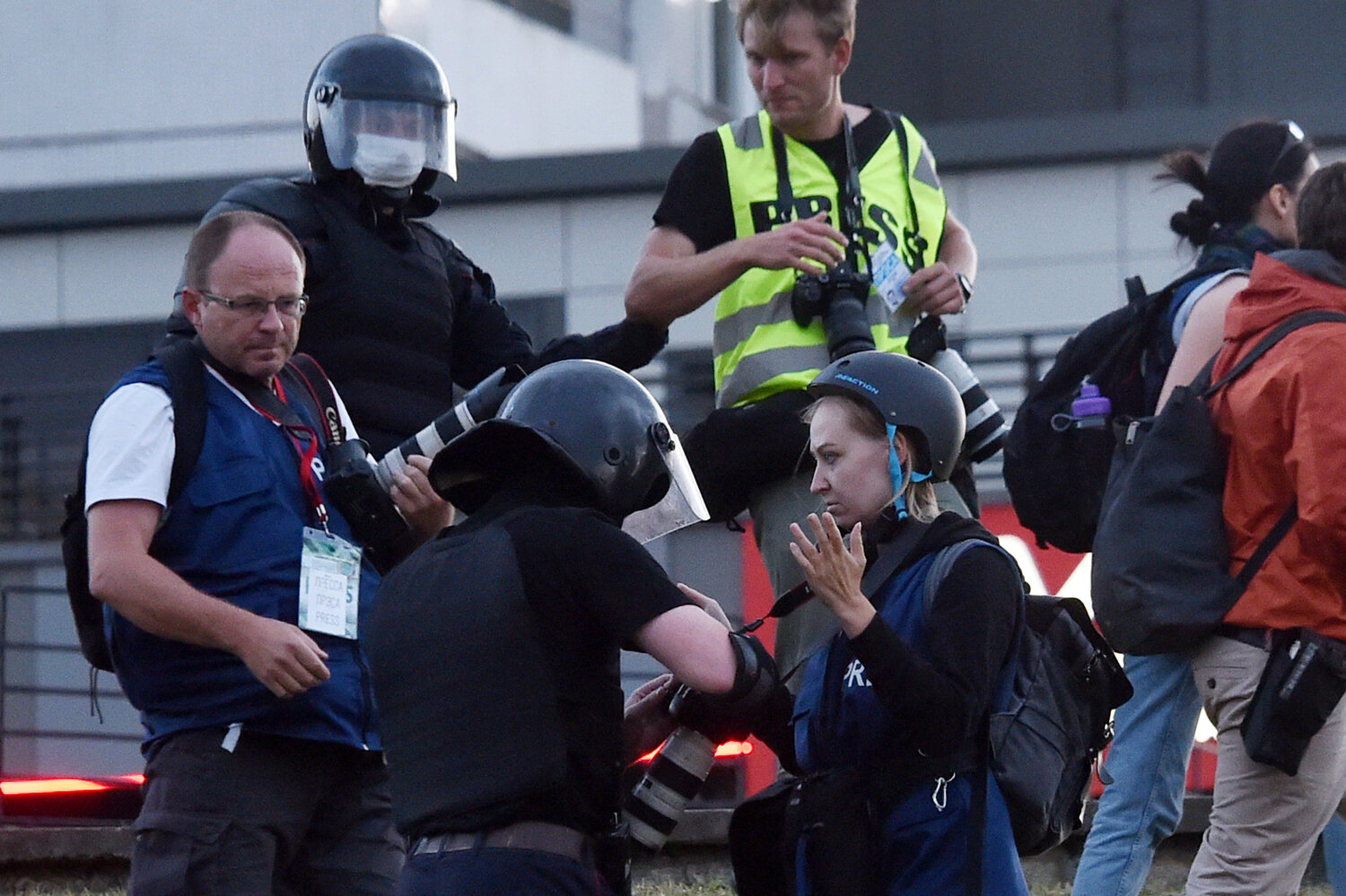 Belarus has always been a challenging country when it comes to press freedom as the massive crackdown against critical voices became more intense after last year’s election. The challenges have multiplied for women journalists especially as the environment is becoming more repressive with every single day. More than five hundred journalists are said to have faced detention since last year. According to data documented by The Coalition For Women In Journalism, 77 women journalists faced different sorts of harassment, detention, and imprisonments in the year 2020. The number is 15 until this year and it is increasing every day.

According to the Belarusian Association of Journalists, the imprisoned journalists have collectively spent more than 1200 days in prison. It has also been reported that the state-owned publishing house refused to print for five newspapers. A major crackdown was executed and Tut.By news offices. The news outlets’ offices were raided, equipment was confiscated. There were reports of several arrests. The web portal and social media accounts were also blocked. The harsh and threatening response towards journalists and news media has resulted in a five-point decline in the country's rating in the Press Freedom Index documented by RSF. Belarus stands at 158 out of 180 countries. The country’s press freedom situation is even worse than Russia.

CFWIJ documented the release of Tut.By correspondent Katsiaryna Barysevish, the staff reporter was finally released from the Belarusian detention center after completing her sentence period on May 19. Katsiaryna was taken into police custody for violating medical confidentiality in her investigating story regarding a murdered activist. The day Katsiaryna was released, Tut.By offices were raided and many staffers were reported to be detained by the authorities. Their equipment was confiscated and social media sites and accounts were blocked.

Only a few days before the raid at Tut.By offices, their staff reporter Lyubov Kasperovich was detained by the authorities and later charged with fifteen days in prison for her coverage of a mass demonstration held in Minsk. The journalist was detained on May 14 while she was covering the trial of 12 young opposition supporters. In the same manner, photojournalist Tatsyana Kapitonava was detained for covering an unauthorized event on May 13. Police arrested her while she was recording at the event. According to the eyewitnesses, police intentionally came to arrest her. There was a massive crackdown reported against journalists and civilians as they were organizing a protest rally against President Alexander Lukashenko. It was reported that most of the arrested journalists were women.

Given the deteriorating situation of the country, CFWIJ has been keeping an eye on the unfolding events around press freedom in the country. We have signed a joint statement earlier with the international organizations calling all the EU agencies to apply their restrictions and sanctions against Belarus. The platform has designed an in-focus page containing all the important information and documented statements of a number of women journalists. The page is created to appreciate the dedicated women journalists of Belarus who despite all the hardships show up at work and break barriers to pursue their passion. A lot of information can be found regarding the journalists reporting on the ground in our Twitter thread and Statements. Also, there is recorded instaLive where you may hear the first-hand stories of the struggle of women protesters.

Belarusian parliament moved another bill to further legalize their abuse of power on April 2. The proposed bill includes amendments in mass media law and mass gatherings law. If the bill gets parliamentary approval it will further diminish the press freedom in the country as well as restrict the working journalists even more. The bill includes conditions like expanding legal restrictions on news media outlets and more authoritative power for authorities to refuse any sort of accreditation or shut them completely. The proposed recommendations will further restrict women journalists from reporting on mass events in the country.

The Coalition For Women In Journalism registered the case of deputy chairman of Belarusian PEN center, Tatsiana Niadbai who was interrogated by an investigation committee on March 3. The interrogation was in link with a raid on Press Club that was done on December 22, 2020. The houses of several Press Club employees were also raided. Tatsiana had worked as a coordinator at the Press Club until 2017. The journalist could not reveal any details after interrogation as authorities made her sign a non-disclosure form. Darya Chultsova and Katsyrayna Andreyeva, both were arrested in November 2020 for covering a protest rally. The journalists were live-streaming the police torture in the rally that was held in the memory of murdered protest activist, Raman Bandarenka. Both women journalists were sentenced to two years in prison on February 18, for their reporting on state oppression.

CFWIJ also documented the arrest case of Alina Skrabunova, a Belsat TV correspondent who was arrested for reporting on a rally held in support of an opposition candidate. Alina was released the same day and was fined 1,350 Belarusian rubles. A former woman journalist, Ksenia Lutskina was harassed by authorities over tax evasion charges. She was detained on December 22, 2020, at a shopping center she had gone shopping for. The authorities raided her house and took the equipment in confiscation. On January 17, CFWIJ reported the case of Tatsiana Bublikawa, a BelaPAN reporter who suffered police mistreatment after a raid was conducted at her office in Minsk. The police mishandling caused her panic attack and the journalist ended up in the hospital.

The Coalition For Women In Journalism reached out to Belarusian Journalists Association to learn the latest updates. The deputy chairperson of BAJ Barys Haretski shared in the statement, “Pressure on the media in Belarus has been skyrocketing since last summer. This year we have faced an unprecedented level of repression against journalists. In less than a year we’ve seen over 550 detentions of journalists, more than 70 cases of violence against journalists, and 34 media representatives are being held behind bars at the moment. Half of the journalists in custody are women, some of them report declining health. Many print outlets have been effectively destroyed by the authorities, with more than 50 media websites remaining blocked. Last year’s widespread detentions and administrative arrests of journalists were mainly replaced by arrests on criminal charges, where journalists face up to 7 years in prison. This is a major crackdown on independent media and brutal suppression of free speech.”

According to the latest reports around the proposed bill, CFWIJ believes that the bill will cause more challenges to working journalists in Belarus in an already tense situation of press freedom. These proposed amendments will prohibit professional journalists from reporting freely on government matters. As mentioned in the bill, the proposed law also denies journalists from doing any live-streaming of any unauthorized mass event. The police will be given more power to stop any filming or photography happening at the protests. The Coalition For Women In Journalism demands that the Belarusian parliament reject these unjustified demands proposed in the ill just to curb the remaining press freedom in the country. We demand the Belarusian government to release all the women journalists that are being held unlawfully.