Reinforcement of Repression against Independent Journalists in Homiel

Two police reports have been drawn up in relation to a journalist Maryna Drabysheuskaya, who cooperates with ‘Belsat’ TV channel and ‘Novy Chas’ newspaper, for the alleged ‘illegal production of mass media product’ (article 22.9 of Belarus Code on Administrative Offenses) in Homiel since recently.

The journalist’s video footage was dedicated to street music performers and a puppet show in Homiel.
The police disregarded the fact that the journalist had a press card of ‘Novy Chas’ newspaper correspondent with her.

Yury Hrad, a police inspector from Chyhunachny City District Department of Internal Affairs noted in his report that the journalist had ‘published’ her video footage in a program of ‘Belsat’ TVchannel from Poland. Two more police reports were drawn up in relation to another freelance journalist from Homiel Larysa Shchyrakova, who contributed video materials to the ‘Belsat’ TV channel. 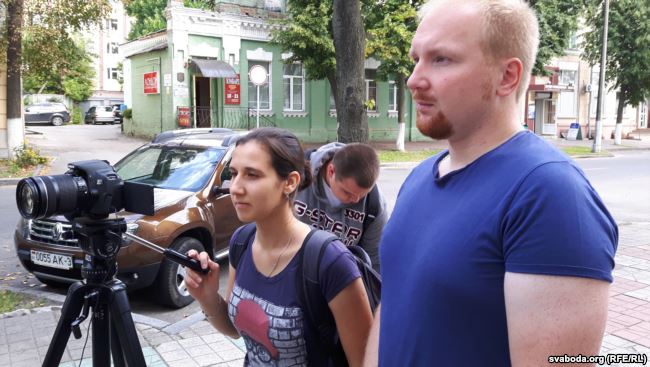 One video story was dedicated to the problems of ‘Asautsy’ auto-market in Homiel. And the second video report dwelt upon the efforts of local governmental authorities to build new blocks of flats in the quarters of already existing residential areas and the consequent local dwellers’ protest actions in the second largest city in Belarus.

The police reports were produced in the Savietski and Chyhunachny City Distict Departments of Internal Affairs in Homiel.
“The pressure on independent journalists persists”, noted Larysa Shchyrakova. “It looks like the law enforcement agencies make freelancers leave the profession…

Personally, I still have strength to resist the pressure. Also, I feel solidarity and support on the part of my colleagues and heroes of my publications. The latter underscore the social importance and usefulness of my work. Actually, I believe it’s my moral duty to collect and disseminate non-biased and truthful information”, the journalist added.

It’s worth mentioning that since the beginning of 2017, the total sum of fines, imposed on the freelance journalist Larysa Shchyrakova for her work has amounted to 3381 Belarusian rubles (around EUR 1470).