At least 274 journalists imprisoned globally despite COVID-19 risks in jail. 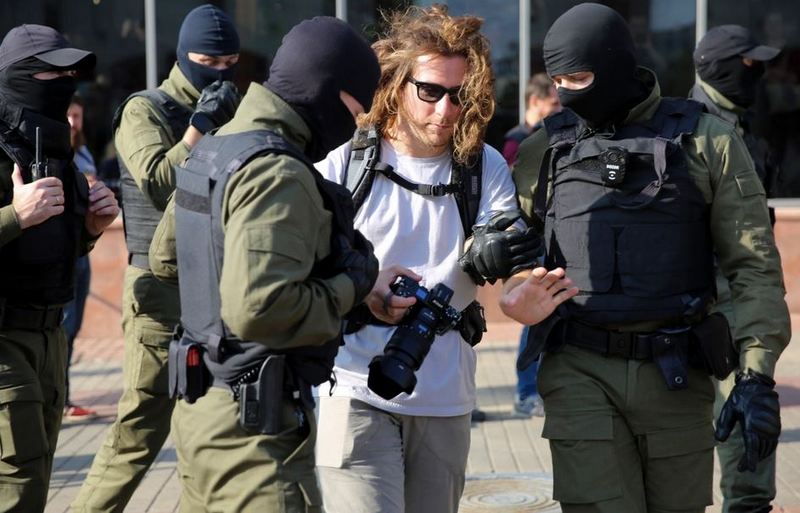 Police officers detain a photojournalist during an opposition rally to protest the official presidential election results in Minsk, Belarus, Saturday, Sept. 26, 2020. Hundreds of thousands of Belarusians have been protesting daily since the Aug. 9 presidential election. (AP Photo/TUT.by)

New York, December 15, 2020–A record number of journalists were imprisoned because of their work in 2020, as governments clamped down on news coverage of civil unrest and the coronavirus pandemic, the Committee to Protect Journalists found in its latest annual census.

“It’s shocking and appalling that we are seeing a record number of journalists imprisoned in the midst of a global pandemic,” said CPJ Executive Director Joel Simon. “This wave of repression is a form of censorship that is disrupting the flow of information and fueling the infodemic. With COVID 19 raging through the world’s prison, it’s also putting the lives of journalists at risk.”

At least 274 journalists were jailed as of December 1, the most since CPJ began collecting data in the early 1990s, and the fifth consecutive year with at least 250 journalists imprisoned. China, Turkey, Egypt, and Saudi Arabia were the worst jailers.

Protests and political tensions were a catalyst for many arrests. Two countries with significant increases in jailed journalists were Ethiopia, where unrest has degenerated into armed conflict, and Belarus, where journalists were detained while covering protests against President Aleksandr Lukashenko, who claimed victory in an election widely seen as fraudulent.

While no journalists were jailed in the U.S. at the time of CPJ’s prison census, an unprecedented 110 were arrested or charged in 2020, many while covering demonstrations against police violence; at least 12 still face charges, according to the U.S. Press Freedom Tracker.

President Donald Trump’s harsh rhetoric throughout his term, including calling critical reports “fake news,” gave cover to authoritarians to crack down on journalists in their own countries. Globally, 34 journalists were jailed for “false news,” compared with 31 last year. CPJ recently published recommendations to the incoming Biden administration for restoring U.S. leadership on press freedom, including prioritizing the issue in foreign policy and appointing a Special Presidential Envoy for Press Freedom.

“The record number of journalists imprisoned around the world is President Trump’s press freedom legacy,” Simon said. “The incoming Biden administration must work as part of a global coalition to bring the number down.”

Amid the pandemic, authoritarian leaders tried to control the narrative by arresting journalists; they also delayed trials, restricted visitors, and disregarded the increased health risk in prison; at least two journalists died after contracting the disease in custody. CPJ documented more than 200 press freedom violations related to COVID-19 and launched the #FreeThePress campaign to call on world leaders to release all imprisoned journalists.

CPJ’s census is a snapshot of those incarcerated at 12:01 a.m. on December 1, 2020. It does not include the many journalists imprisoned and released throughout the year; accounts of those cases can be found at http://cpj.org. Journalists remain on CPJ’s list until the organization determines with reasonable certainty that they have been released or have died in custody. CPJ advocacy helped lead to the early release of at least 75 imprisoned journalists worldwide this year.

CPJ is an independent, nonprofit organization that works to safeguard press freedom worldwide.