Last week the National Center for Contemporary Arts opened an exhibition of five local artists. One of them – Alexey Kuzmich – came to the opening in a raincoat on a naked body.

During his eccentric performance, the artist took Viagra and put a “Ministry of Culture” sign on his private parts to protest against censorship.

But what did make the artist come to his own exhibition in a birthday suit in the first place? 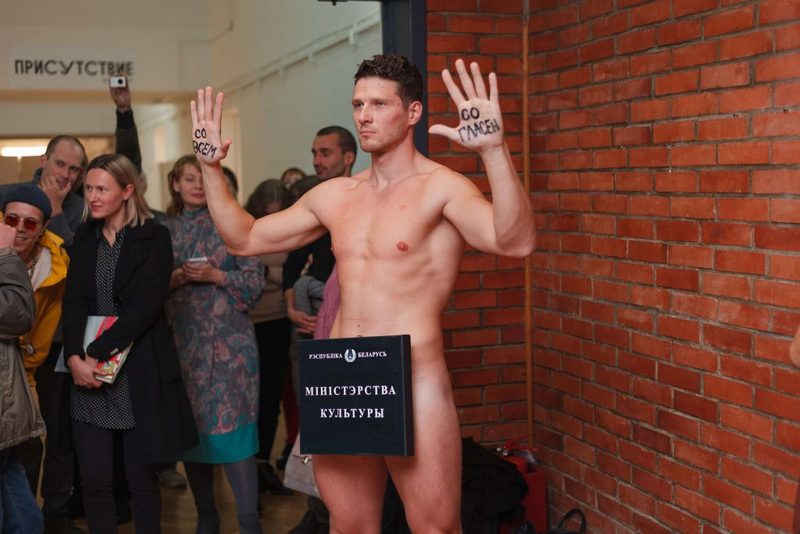 Talking to journalists, Kuzmich explained that he was inspired by “No erect penises” response to his question about censorship at the exhibition sponsored by the Ministry of Culture.

“The purpose of the ‘Shield, or the Ministry of Falloculture’ campaign was to show that in the modern capitalist art world, the artist is not a thunderer who offers the audience an alternative universe and has the right to be free and independent.

Most often he is a miserable creature who works on interior design and celebrations for a penny. Those who are better off live on grants. Therefore, a penis masked by a shield is a metaphor for the artist’s inaction and passivity in the modern art world,” he said.

How did it all start? The National Center for Contemporary Arts of Belarus invited Kuzmich along with three other artists to take part in an exhibition.

“My first thought was to refuse. Those familiar with the Belarusian art context know that this is a totalitarian and censored ideological place, where there is no place for artistic expression.

But I agreed to the exhibition to find out what happens when the artist comes to the state art institution and begins to cooperate with it,” explained Kuzmich.

After three months of numerous alignments and edits forbidding foul language, thorny religious, political and ideological issues the artist decided to fight against censorship his own way.

As expected, the representatives of the centre didn’t appreciate the stunt and treat as a personal affront to the National Center for Contemporary Arts, the Ministry of Culture and the state.

“This act is not only against censorship, but it is also against culture as a whole. This is my opinion as an artist. To my great regret, it has now become very popular to attract attention this way. Moreover, I am offended by his actions as a citizen.

If he undressed and protested, for instance, in a trolleybus, this would be interpreted as hooliganism, and here it is an artistic expression. In my understanding, he should be responsible for his actions as a hooligan,” said the director of the centre Sergey Krishtapovich.