At the beginning of the month, over 200 journalists sent a petition to the Ministry of Information and to the General prosecutor’s office asking to hold a full and impartial investigation into the beating of journalist Pavel Dabravolski in a building of court. 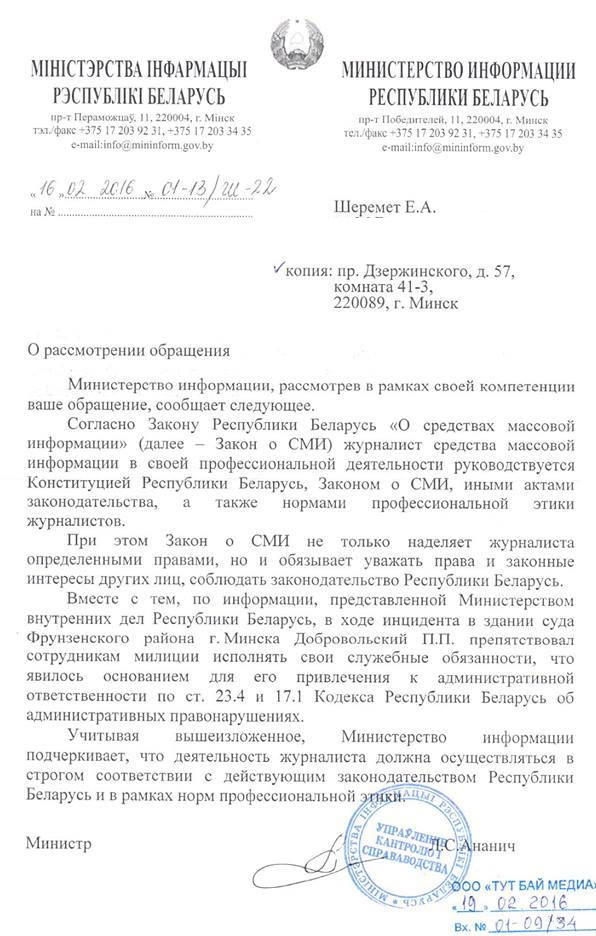 In fact, the Ministry of Information dismissed the petition in essence.

We remind that Pavel Dabravolski was found guilty of two offences (minor hooliganism and disobeying lawful demands of the officials). The journalist was covering a trial in court: when activists demonstrated in court against allegedly political nature of the trial against graffitists, they were taken out of court by police officers. The activists were taken to the back room, and the journalist followed them with a cell phone, recording the actions. Then, all three of them were brutally beaten, people who were present in court confirm hearing shouts. The journalist was fined; he disagrees with the decision. The appeal is to be heard on March 1.

The statement of reasons for the judgement quotes testimonies of the policemen who beat the journalist. Policeman Shysho says that he assisted to his colleague when saw him taking the violators out of the court room: the journalist ran after them into the corridor and started to push onto the colleague, pulled him by the collar. Policeman Kavalchuk said that the journalist ran out from the hall to the isolated corridor and started to pull him by the collar in the opposite direction.

However, the journalist had not been in the courtroom, he was in the hall all the time; and there is a video showing that in the hall, he did not pull anyone by collars, he was walking in the hall with a camera in the hands, then went out from the hall into the back room (1:18 - 1:20 seconds), there heard shouts at the two detained activists in the room.