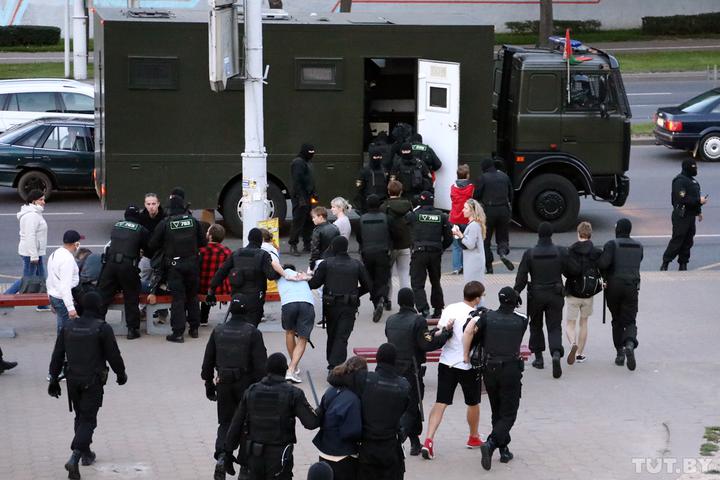 Protestors detained in Minsk on September 13

Belsat journalists Katsiaryna Andreyeva and Maksim Kalitouski were detained. They were streaming from protests.  The journalists were taken to the Kastrychnitski police department. The police took away their equipment and threatened to handcuff them.

Katsiaryna told her family they had been charged under Art. 22.9 ( "violation of the legislation on mass media") and Art. 23.4 (disobedience to police) of the Administrative Code. The policeman in charge said that they would be tried only on Tuesday (September 15). The journalists will stay in Akrestsina detention center until then.

In the afternoon representative of Adami Media Prize Volha Bartlava was detained down town Minsk. The police drew up a report under article  23.34 of the Administrative Code. Volha was taken to hospital by an ambulance with a hypertensive crisis.

During the Women's March, a Russia Today cameraman tried to grab the phone of Ales Piletski, journalist of RFE/RL. Ales tells this story:

We approached them and asked them  what publication they represented. They responded with filming us in the face. I took out my phone and tried to film them too. The man grabbed my phone aggressively, but I did not let him take it away. It all happened very quickly. We don't know who they are and if they are journalists."

The police came to the house of Brest journalists Milana Kharytonava and Ales Liauchuk, but failed to get inside.

Journalist Stas Korshunau received a call from the police who warned him that he should not participate in mass events.

Belsat Artsiom Liava was detained. He was taken to Kastrychnitski police department. A few hours later he was released. The police did not draw up the report, but took his car, laptop and phone for expert examination.

Nasha Niva journalist Zmitser Pankavets was detained at Navavilenskaya street, and was released after ID checkup.

At Pushkinskaya, a riot policeman pushed TASS photojournalist Valeriy Sharifulinfrom the parapet of the stairs. His equipment might be damaged.

In Minsk the police violently detained journalist Tatsiana Harhalyk. She was taken to Kastrychnitski police department. The police drew up the report under Art. 23.34 of the Administrative Code and released her.

Late in the evening in Cafe 1067 three journalists were detained: Aliaksandr Vasiukovich, Uladz Hrydzin. They were detained together with Siarhei Kandratsenka, press secretary of Batskaushchyna NGO.

All journalists wore PRESS badges. The police officers entered the cafe with the intention to arrest the journalists.

The journalists were left in the detention center in Akrestsin Street before the trial. They are prosecuted under the protocols under Art. 23.34 of the Administrative Code (not yet confirmed).

Last week he was released from the detention center, where he served 8 days of administrative arrest. The journalist was on hunger strike for 8 days to protest against his arrest.