The hijacking of a plane and kidnapping of editor and blogger Raman Pratasevich is viewed by the free expression, press freedom and journalists’ community as the outrageous climax of a broader campaign against media freedom in Belarus that drastically intensified after the August 2020 election. Free Press Unlimited co-wrote a joint call to make respect for press freedom a cornerstone of all demands towards Belarus. 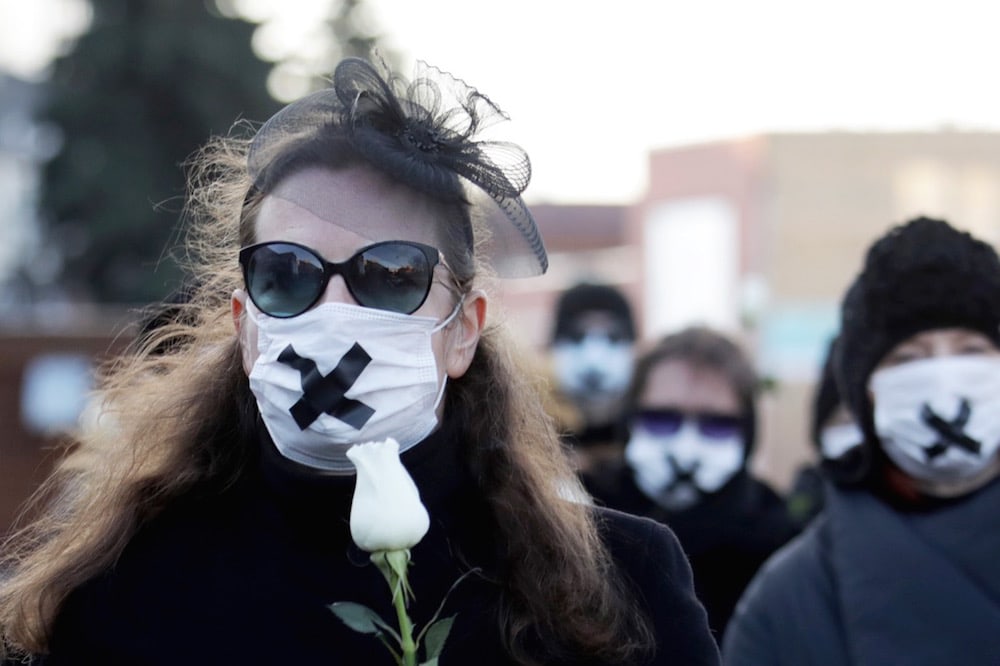 Women wearing black clothing and tape over their mouths demonstrate against the conviction of a journalist and a doctor over the disclosure of a protester's medical records, Minsk, Belarus, 2 March 2021, -/AFP via Getty Images

The hijacking is yet another step in a massive attack on press freedom and should not be treated as a separate incident. Since August 2020, there have been more than 550 instances of journalists being arbitrarily detained and they have spent more than 3,000 days in jail collectively.

In the midst of the fallout from the hijacking of the Ryanair flight, on 24 May Lukashenka simultaneously signed new amendments to the Mass Media Law that enable further repression of independent media, and all but outlaw their activities. When the amendments come into effect, the Information Ministry will be authorized to shut down media outlets without a court order.

Responding to the events outlined above requires a strong commitment to defend the space for media freedom in Belarus. Therefore, in addition to urging the immediate and unconditional release of all detained or imprisoned journalists and media actors, we urge the international community to make respect for press freedom conditional in all its demands towards Lukashenka’s administration. We call on all states to ensure that business does not continue as usual and to exert their influence to cut the economic lifeline of the regime’s authoritarian leadership.

At the same time, we also stress that comprehensive economic sanctions on any country can cause enormous hardship to civilians who are often not responsible for the actions their government takes. The international community has begun imposing sanctions on Belarus over its outrageous act. It must ensure that any additional sanctions it considers imposing are targeted specifically on Belarusian officials and their financial interests, or private entities that actively collaborate with regime officials and their repressive measures, while insulating Belarusian people from any harmful effects. Foreign businesses entering into relationships with Belarusian corporations should undertake enhanced due diligence to ensure that they are not supporting government officials or their actions – in particular, restrictions on individual freedoms, including the right to free expression.

Accountability for violations and support for independent media

We further call for accountability for all those responsible for violations of the rights of journalists, activists, cultural figures and others subjected to excessive force, reprisals, torture and ill-treatment. Finally, we also urge increased support to independent media and threatened journalists in Belarus, including through the streamlining of humanitarian and relocation requests, so that they can continue their work safely and effectively. People need access to reliable information, especially during situations of crisis.