MINSK -- RFE/RL correspondent Aleh Hruzdzilovich, who was sentenced to 18 months in prison by Belarusian authorities for allegedly participating in demonstrations that he says he was covering as a journalist, has been transferred to a penal colony in the country’s east. 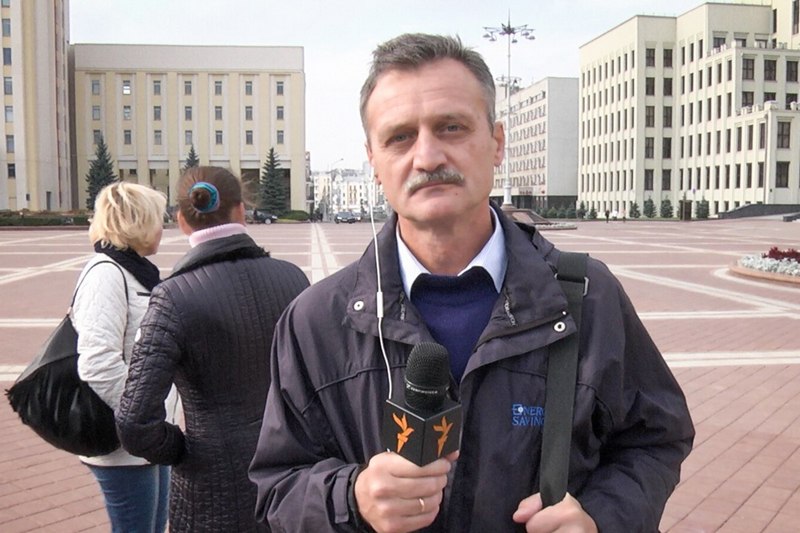 Hruzdzilovich’s wife, Maryana, told RFE/RL on May 30 that her husband was sent to a penal colony in the region of Mahilyou and that it may take several days before he reaches the penitentiary.

The process of transferring convicts in Belarus and many other former Soviet republics, known as "etap," involves trains specifically designed for prisoners. The transfers can take days or even weeks.

Prisoners who travel in such trains are crowded into caged compartments with little fresh air, no showers, and only limited access to a toilet or food.

A court in Minsk sentenced Hruzdzilovich in early March for his presence at mass protests challenging the official results of a 2020 presidential election that handed authoritarian ruler Alyaksandr Lukashenka a sixth term in office.

Hruzdzilovich was also ordered to pay 56,000 rubles ($16,600) in compensation to the Mensktrans city transportation agency, which was a plaintiff in the case. Mensktrans claimed Hruzdzilovich’s participation in three unsanctioned rallies cost it revenues.

Hruzdzilovich was arrested in December amid a harsh crackdown by Belarusian authorities on independent media, rights activists, and democratic institutions in the wake of the protests.

The opposition and West say the vote was rigged and that opposition candidate Svyatlana Tsikhanouskaya won the election. Thousands of people have been detained by security forces in the crackdown.

RFE/RL President Jamie Fly has condemned Hruzdzilovich's prison sentence, calling it "illegitimate" saying “his only ‘crime’ was reporting the truth to Belarusians who are now denied that truth by their government."

Two other RFE/RL journalists are also currently in Belarusian custody.

Ihar Losik, a blogger and a consultant to RFE/RL, was handed a 15-year prison term in December on charges of "organizing mass riots" and "incitement to social hatred," which he has rejected as politically motivated.

A freelance correspondent for RFE/RL, Andrey Kuznechyk, was arrested in November and will go on trial for unspecified charges on June 8.