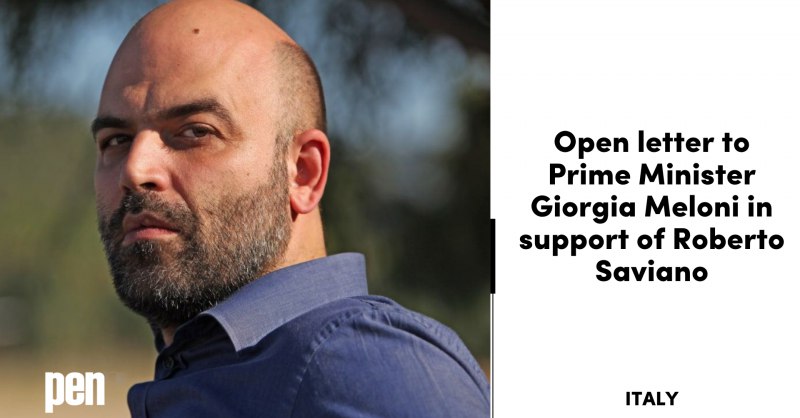 Ahead of the hearing, PEN International President Burhan Sonmez urges Prime Minister Meloni to drop all criminal defamation charges against Saviano and to abide by Italy’s national and international obligations to uphold freedom of expression. The letter is also available in Italian and was first published in La Stampa. PEN International contacted the Prime Minister's Office on 4 November; they had not yet responded at the time of publication.

I am writing on behalf of PEN International, the global association of writers dedicated to promoting literature and defending freedom of expression, to express my grave concerns for fellow writer Roberto Saviano, who faces up to three years in prison on criminal defamation charges. We urge you to drop the case against him and to do everything in your power to support investigative journalism and independent media.

Saviano has been repeatedly targeted for peacefully expressing his views. The latest charges against him are sadly representative of a worrying trend in Italy, where journalists and writers work in the knowledge that they might be sued and imprisoned for what they say or what they write.

Despite calls by Italy’s Constitutional Court to undertake a comprehensive review of criminal defamation laws, journalists and writers are still liable to prison sentences in case of defamation through the press. Criminal defamation lawsuits exhaust their victims. They rob them of their time, of their money, of their vital energy. Crucially, they are punitive and can lead to self-censorship and discourage the investigative journalism that is so necessary in a healthy and functioning democracy. They constitute a threat to freedom of expression – which is enshrined in Italy’s domestic and international human rights obligations.

As the Prime Minister of Italy, pursing your case against him would send a chilling message to all journalists and writers in the country, who may no longer dare to speak out for fear of reprisals.

Saviano is not alone. We stand with him and will continue to campaign until all criminal defamation charges against him are dropped, and his right to peacefully express his views is upheld once and for all. 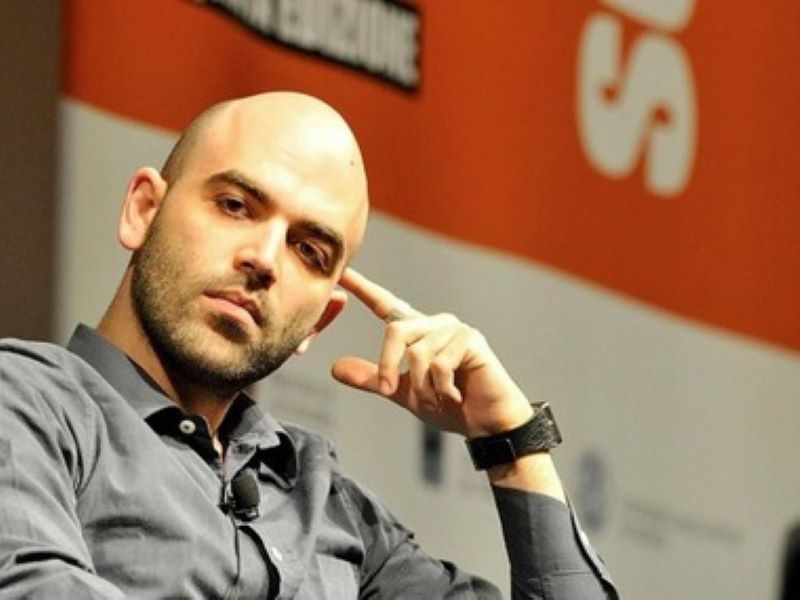 Roberto Saviano, 43, is the author of Gomorrah, an international best seller that has sold over 10 million copies worldwide. Other books include Beauty and the inferno (2009), La parola contro la camorra (2010); Come away with me (2011), ZeroZeroZero (2013), La paranza dei bambini (2016), Bacio feroce (2017), In mare non esistono taxi (2019), Gridalo (2020), Solo è il coraggio (2022). He wrote several screenplays and theatre scripts and regularly contributes to newspapers and magazines such as Il Corriere della Sera, Sette, Fanpage, The New York Times, Newsweek, El Diario, Die Zeit, The Guardian, and Le Monde. He is the Winner of the 2011 PEN/Pinter International Writer of Courage Award and of the 2019 Oxfam Novib/PEN International award for freedom of expression.

In December 2020, Saviano was asked on the political TV chat show Piazzapulita to comment on the death of a baby from Guinea following the sinking of a boat carrying migrants in the Mediterranean Sea. Including in his remarks Matteo Salvini – who was recently appointed Italy’s Deputy Prime Minister and who in a previous stint as Interior Minister notably introduced a decree imposing fines of up to €50,000 on NGO rescue boats bringing people to Italy – Saviano said: ‘I just want to say to Meloni, and Salvini, you bastards! How could you have?’. Giorgia Meloni, who had described NGO rescue boats as ‘traffickers’ that needed to be sunk, subsequently sued Saviano for defamation. A judge in Rome later ruled that he should be tried. Meloni’s lawyer is – at the time of writing – Italy’s Deputy Minister of Justice. According to Saviano’s legal team, this situation raises concerns about the independence of the judiciary.

This is not the first time Saviano is being targeted by the Italian authorities for peacefully expressing his views and calling out anti-immigration rhetoric. In 2018, Salvini sued Saviano over a speech that described him as ‘Ministro della Mala Vita’, a phrase borrowed from early 20th-century anti-fascist Gaetano Salvemini. Salvini notably used the letterhead of the Interior Ministry, while the Government, of which Salvini was Deputy Prime Minister and Interior Minister, remained silent. In his speech, Saviano accused Salvini of ignoring the mafia stranglehold on Italy’s south in favour of stirring up resentment against immigrants.

PEN International is actively campaigning on Saviano’s behalf and calling for all charges against him to be dropped. The first hearing has been set for 1 February 2023. Previously in June 2018, Salvini threatened to remove Saviano’s police escort. Saviano has been living under constant police protection since October 2006, after receiving threats from the mafia following the publication of his bestseller Gomorrah.

Italy’s Minister of Culture, Gennaro Sangiuliano, is also suing Saviano for a tweet in 2018 that criticized his appointment as head of TG2, at the Italian state-owned television channel Rai 2. Sangiuliano is seeking hundreds of thousands of euros in compensation. The case is ongoing.

Article 595 of the Italian Penal Code defines defamation as damage to the reputation of a person through communication with several persons and carries up to three years in prison. In 2020, Italy’s Constitutional Court urged Parliament to undergo a wide and comprehensive reform of the defamation legal framework – both criminal and civil. In June 2021, the Court however ruled that Article 595 of the Penal Code was compliant with the Constitution, as it allowed imprisonment in cases of ‘exceptional severity’.