International community must not lose focus on severity of crackdown. 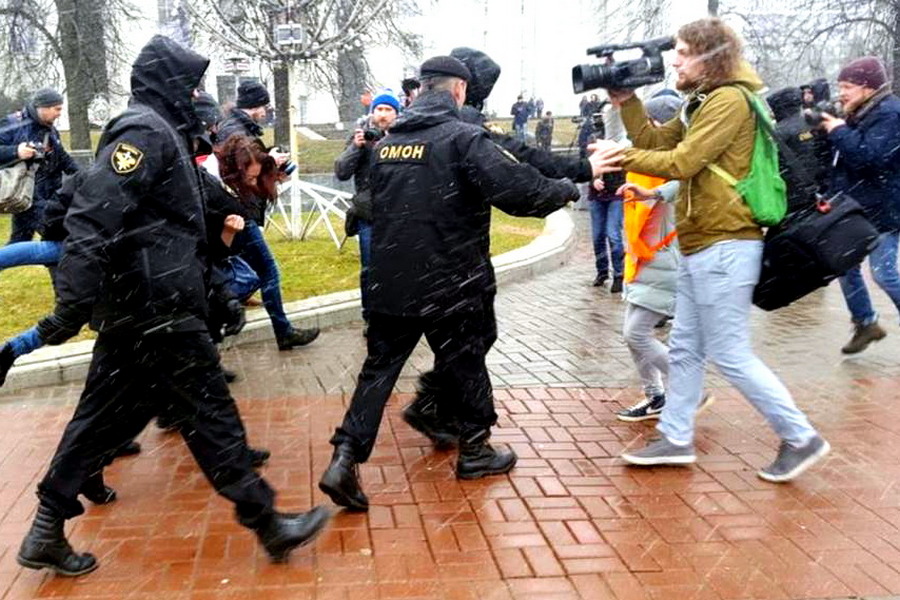 The IPI global network today expresses grave concern over the latest efforts by state authorities in Belarus to stamp out any remaining form of independent media left within the country and urges the international community to respond firmly to the latest string of attacks on media freedom and freedom of expression.

On 4 November, the websites of two leading civil society organizations documenting the crackdown — the Belarusian Association of Journalists (BAJ) and PEN Belarus — were blocked within the country by the Ministry of Information.

On November 1, journalists Iryna Slaunikava and Syarhei Niarouny were found guilty in separate cases of “spreading extremism” by interacting with and liking the Facebook pages of the independent news outlets Белсат and Тут бай, both of which were banned and declared “extremist” by Belarusian authorities over the summer.

Slaunikava was arrested at Minsk airport along with her husband and sentenced by a court in Minsk to 15 days in jail for “distribution of extremist materials”. Niarouny, a freelance journalist, was fined 580 Belarusian rubles (€205) for liking Facebook posts by Tut.by last year.

On October 20, the offices of Novy Chas, one of the few independent newspapers still operating within Belarus, was raided by police. The editor-in-chief, Aksana Kolb, and deputy editor-in-chief, Syarhey Pulsha, were detained and interrogated. Both were released after signing nondisclosure agreements.

“We are now at the point where simply interacting with the Facebook page of an independent media website can land a journalist in jail in Belarus”, IPI Deputy Director Scott Griffen said. “The absurdity of all these cases is illustrative of the unprecedented and relentless crackdown by the Lukashenko regime on all forms of independent or critical media, as well as those organizations documenting the continuing abuses.

“Journalists are targeted with trumped up charges, fined and jailed; others are driven out of the country through the threat of criminal sanctions; domestic media outlets are liquidated through arbitrary “extremist” designations; international publications are blocked for linking to news stories; civil society groups documenting the rights abuses are shut down. It is no exaggeration to say the aim of the government appears to be the complete purge of any remaining source of impartial news or information.

“It is vital that the international community does not lose sight of the scale and severity of the crackdown on media freedoms in Belarus. The invocation of the Vienna Mechanism by 35 states of the Organization for Security and Co-operation (OSCE) is a welcome step for demanding immediate answers from the Belarusian government over its rights abuses, including on media freedom.”

At least 29 journalists and media workers are currently being held in detention centres and penal colonies, according to BAJ, which was liquidated by the Supreme Court in August.

More than 140 different searches and raids on the offices of independent media outlets and homes of individual journalists were documented between January and September 2021, according to BAJ, resulting in the confiscation of journalistic equipment and devices.

The websites of more than 100 media outlets and political news platforms were taken down by the Information Ministry in the same period, BAJ reported.

Meanwhile, two of the country’s oldest human rights organizations – the Belarusian Helsinki Committee and Legal Initiative – were dissolved by the Supreme Court, bringing the tally of NGOs within Belarus to be banned or in the process of being liquidated to 275.

This year IPI awarded its World Press Freedom Hero award to Yuliya Slutskaya, the founder and chairperson of Press Club Belarus. Slutskaya and several members of her staff were jailed on trumped-up tax evasion charges. She and four colleagues were released after eight months of pre-trial detention in August.