The Index on Censorship  published a letter from Andrey Aleksandrov from prison. 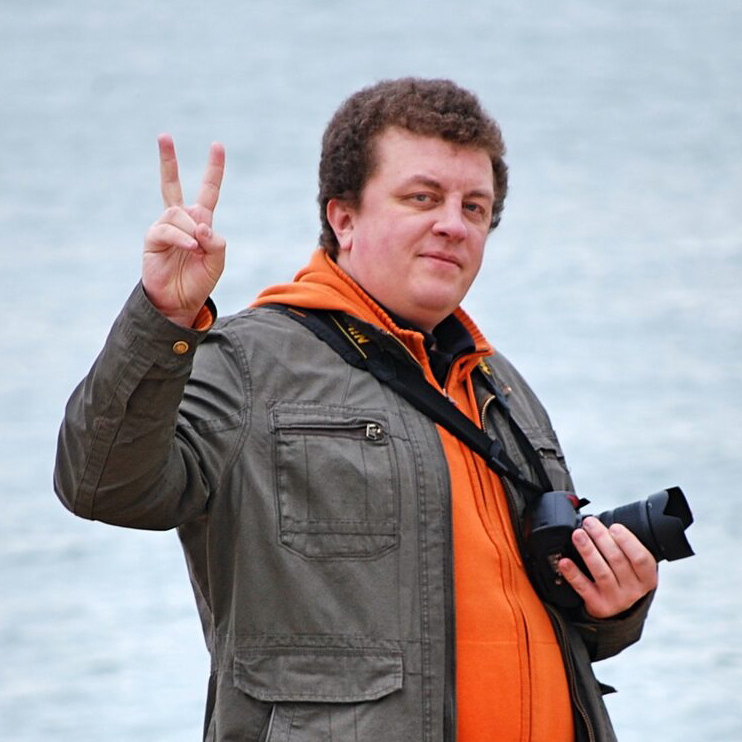 "I wonder if Santa will appreciate the fact that I've been eating well and leading a proper lifestyle. Thanks to you, and other good people, my conscience is clear."

Reader’s note: Andrei Aliaksandrau is a journalist and human rights defender. He had been a media manager and deputy director of the Belarusian Private News Agency (BelaPAN) prior to his detention. In the 2010s, he lived and worked in the UK where he studied media management at the University of Westminster, before taking on roles at Index on Censorship and Article 19.

Andrei was detained on 12 January 2021 alongside his partner, Irina Zlobina. He is being accused of financing the protests in Minsk by paying fines and reimbursing the costs for detention in temporary detention facilities for those detained during protests in Minsk. He has since been charged with high treason and, if convicted, could face up to 15 years in prison. He remains in pre-trial detention.

The letter below was written by Andrei to his friend Tania at the end of September 2021. Andrei writes about the apparent absurdity of asking someone how they are when things are not going well for them, about social media, and about the books he’s been reading. He refers to the writings of Svetlana Alexievich, Hermann Hesse, Milan Kundera, Kazuo Ishiguro, and Haruki Murakami in a paragraph that he playfully refers to as a “column” called “Aliaksandrau Reads”. When he writes “pardon the pun”, he is referring to how he has replaced “in conclusion” (В заключение) with “in custody” (В заключении). The reference to “Mazeikis” is possibly a reference to Lithuanian professor, Gintautas Mažeikis.

Authenticity is a recurrent theme in his letter: he refers to “the authenticity of distress” in Hermann Hesse’s writing and to Milan Kundera’s novel Identity (which is known as Authenticity in Russian). He says he’s led a very “authentic” life this year thanks to his friends. At the end of his letter, he refers to words “with a very flexible meaning”, which also seems to be a reference to the word “authenticity”.

The tried-and-true scheme worked again: if you want a letter, write a letter. I just sent you a postcard with a bird, and immediately I got a letter from you! And on the same day as the letter from Oksana. Just a miracle day.

I wanted to write something like “glad you seem to have recovered a bit”. But then I thought that [would] sound strange now. It sounds like an American budget action film, in which a cop rushes up to another character, who’s clearly had enough, and asks: “Are you OK?” And this character has just been run over by a lorry, thrown out of a flying plane, or hit by a cannon ball, and the character is lying there barely alive, bleeding cranberry jam. Everyone can see that he’s definitely not okay, but the character – enduring the pain – moans in response: “Yes, I’m fine”. What else can he say? Especially given how much of a rubber stamp the phrase “I’m fine” is :) That’s just occurred to me now… But I’m just being ironic ([asking how someone is] is about empathy, not a cure after all). Really, I hope you’re more or less okay. At least, from what I understand, you’re very busy. It’s usually a distraction.

I’m curious as to what social media looks like these days. Here’s my ideal social network right now: emails. It’s the Facebook of a healthy person! Real friends, smart and kind posts, cool pictures (sometimes whole insta-stories, and kittens – kittens!), interesting people are added as friends, no hating, reposts are enviable. It’s a fairy tale. I wish everyone could have such social networks. However, the cost of promoting it is not small, but this is just a detail. The main thing is that in this form it would teach us to do good. Almost like books.

Books, I go on, yes. I’m glad Hesse stopped by. His essay is actually magical. In ten pages, the man manages to be so precise about so many important topics (not for nothing did he get an award, like our Alexievich). I was also hooked on many things in it, but perhaps most impressed by how simply and deeply he articulated the meaning of life – and “the authenticity of distress”, which can only lead to answers and solutions. And it was so fortunate as well that it almost overlaps with the utterly brilliant Kundera with an entire novel, Authenticity [Identity], and with Slowness at the same time. I read it (I recommend one-night books), digested it and reread it. It’s so well written. You’ll enjoy the process. Slowness is also funny, plus there’s an awesome theory about dancers and their “moral judo”, which reminded me a lot of Mazeikis, with scenes and arenas. All in all, Kundera has burst into my personal favourites (The Unbearable Lightness of Being is there from his youth, but it’s all lovely). And an addition to the ranks of cool Japanese: I’m adding Kazuo Ishiguro to Murakami. Style and music. And while Murakami is blues, Ishiguro is light airy strings. And the blues too. I wonder if it’s a coincidence or if it’s something about the Japanese. I’m still figuring it out.

That was our regular column “Aliaksandrau Reads” (by request of a regular audience) :) In custody [conclusion] – about the weather (pardon the pun). Autumn. Autumn is good (although people on your side of the fence are already complaining about the cold). New Year is coming soon. I wonder if Santa will appreciate the fact that I’ve been eating well and leading a proper lifestyle. Thanks to you, and other good people, my conscience is clear. And in front of Santa too. Wow, it sounds like a pretty good year. I think in terms of authenticity, it’s one of the good ones. Just a few words with a very flexible meaning. :)

What else is there to say? Healthy, [good] mindset, warm and relaxed. I hope you are in order on these points too, as are our dear mutual acquaintances. Greetings to all. I remember and love all of you. Keep writing. 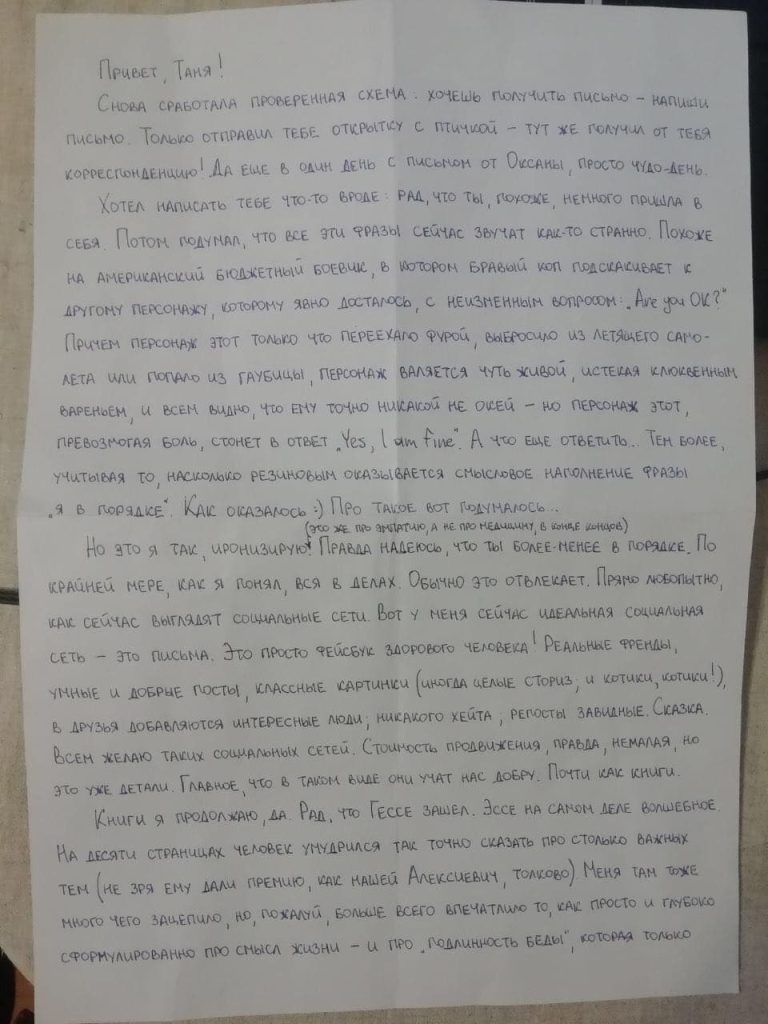 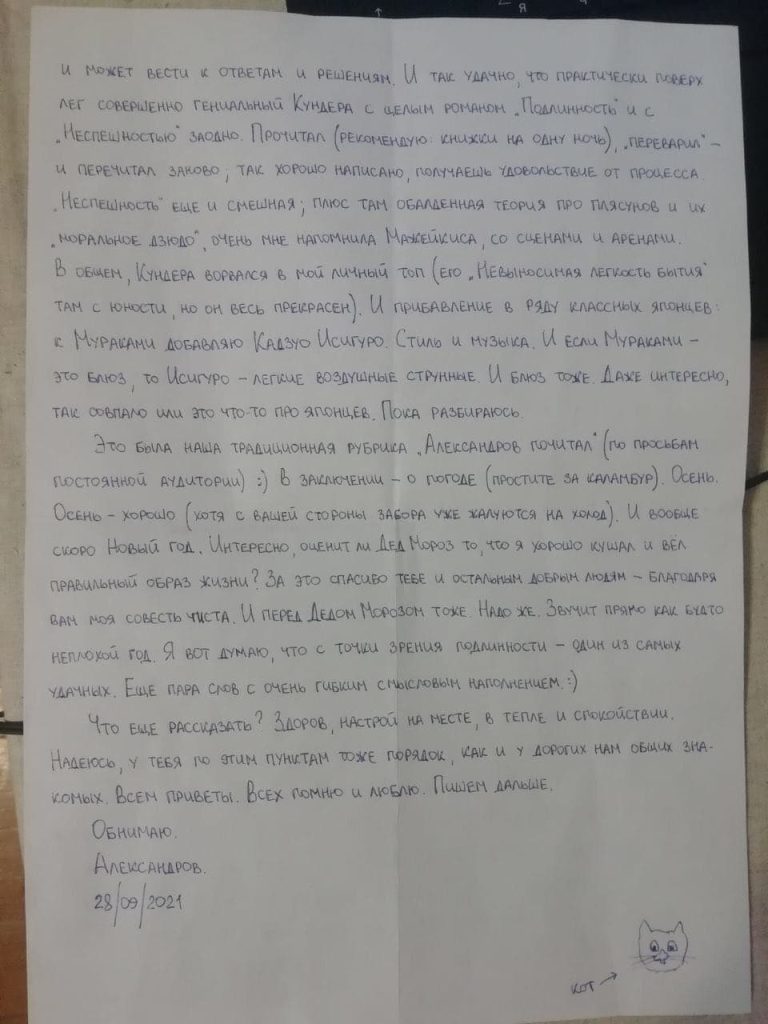