Journalist Andrei Aliaksandrau and his partner campaigner Irina Zlobina have been behind bars since 12 January 2021, when they were detained and imprisoned for claiming their right to freedom of expression.

On the anniversary of their detention, on 12 January 2022, ARTICLE 19 and Index on Censorship launched a campaign in solidarity and calling for their immediate and unconditional release. 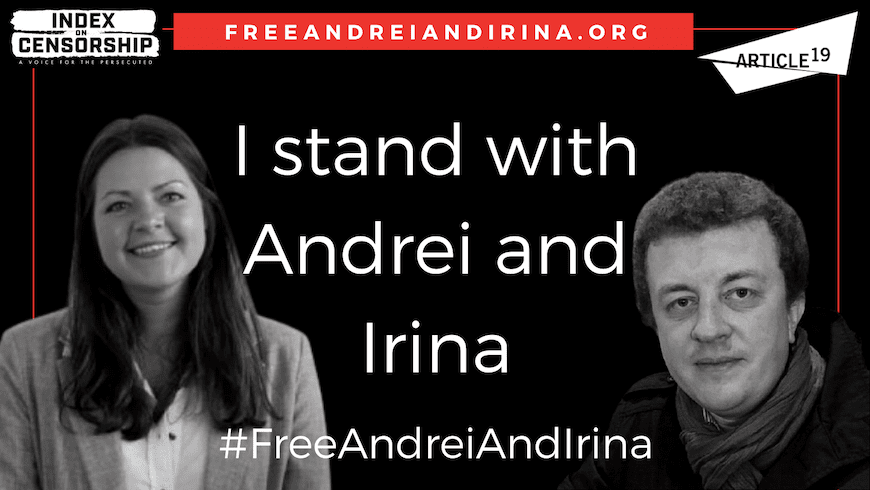 A journalist and human rights defender who previously worked at both Index on Censorship and ARTICLE 19, Andrei is now facing charges of ‘treason to the state’. If convicted, Andrei will face up to 15 years in prison.

His partner Irina Zlobina was also detained ‘on suspicion of financing protest activities’ and has since been charged with ‘organisation and preparation of actions that grossly violate public order’. She is facing up to three years in prison.

We are calling on the international community to join the solidarity campaign, and in urging the Belarusian authorities to release them.

How to join the campaign

It’s important to bring Andrei and Irina’s plight to public attention and to encourage people to show their support for them. Sign the petition and demand that the Belarusian authorities release Andrei and Irina now.

Collectively we will continue to demand justice on their behalf and on behalf of the many Belarusians facing ongoing and blatant travesties of justice.

Andrei, Irina, and all political prisoners in Belarus are subject to politically-motivated persecution. Their crime? Tireless efforts to oppose the Belarusian regime’s crackdown on civil society and to defend fundamental human rights. They need to know we are thinking of them and will not cease to demand justice on their behalf. You can write a personal letter to Andrei and Irina. Let them know that their efforts are appreciated and the international community stands by them.

Since the fraudulent presidential election in August 2020, the authorities under President Aliaksandr Lukashenko have detained tens of thousands of peaceful protesters. As of January 2022, almost 1000 political prisoners remain behind bars. According to the Belarusian Association of Journalists (BAJ), authorities have also blocked several news and media websites. Civil society organisations dedicated to defending freedom of expression have been forcibly closed. Many Telegram channels publishing independent information have been labelled ‘extremist’.  ARTICLE 19 closely monitors the rapidly deteriorating situation in Belarus and regularly joins international initiatives calling for justice and for the protection of fundamental rights of the Belarusian people, including right to protest, media freedom and freedom of expression.

Use one of these sample social media posts to spread the message of solidarity and to join us in calling for the immediate release of Andrei and Irina. Don’t forget to add the hashtag: #FreeAndreiAndIrina and include tags so more people can learn about the campaign.

You can find images for various Social Media here. 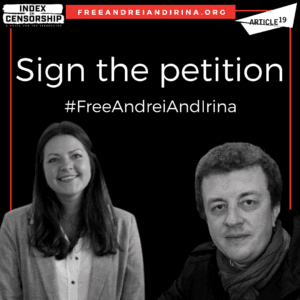 Access the campaign’s Google Drive and download resources, including social media banners and other assets to help spread the word and support the campaign.