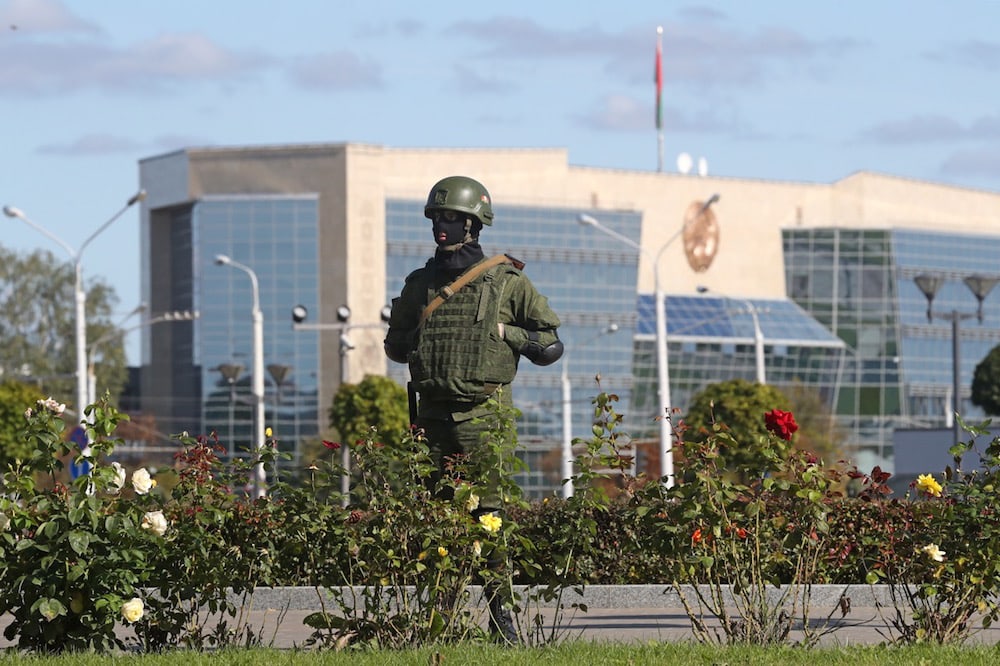 IFEX expresses solidarity with its member the Belarusian Association of Journalists (BAJ), following today’s politically-motivated decision by the Belarus Supreme Court to liquidate the organisation. We call on the international community to support all Belarusian journalists and rights defenders whose lives and livelihoods are under threat.

IFEX, the global network of over 100 organisations dedicated to promoting and defending the right to freedom of expression and information, is expressing its solidarity with its member the Belarusian Association of Journalists (BAJ), following today’s politically-motivated decision by the Belarus Supreme Court to liquidate the organisation.

Amidst the Belarus regime’s ongoing crackdown on civil society, IFEX also calls on the international community to provide direct, long-term support to Belarusian journalists and rights defenders, whose lives and livelihoods are under threat.

For over 25 years, BAJ and its membership of over 1300 media workers has promoted freedom of expression and independent journalism in Belarus, facilitating the exercise of civil, social, and cultural rights. BAJ is among dozens of NGOs threatened with liquidation by the regime in what president Lukashenka has openly described as a “purge.”

PEN Belarus, one of the country’s most prominent champions of free expression and cultural freedom, was also recently dissolved by Belarusian authorities. Other organisations targeted include environmental and heritage protection groups, the Office for the Rights of Disabled People, the National Youth Council, the Belarus Press Club, and groups that support the elderly.

Game continued: “The entire IFEX network stands behind BAJ and all Belarus rights groups and defenders whose lives and livelihoods are threatened by the regime. We condemn the regime’s actions, call for an immediate end to the crackdown, and for the release of all jailed protesters and media workers. The international community needs to step up with direct support for all those defending the human rights of the Belarusian people.”

It’s clear the regime is exploiting the judiciary’s lack of independence to silence independent voices. A recent report by UN Special Rapporteur on the situation of human rights in Belarus Anaïs Marin highlighted that “For almost three decades, Belarus has failed to ensure the independence of its judiciary.”

Today’s ruling comes just weeks after the 1-year anniversary of last year’s rigged presidential election in Belarus, which sparked a wave of popular protests calling for Lukashenka’s ousting and for new elections.

As chronicled each month by IFEX, the regime’s response has been to launch an unprecedented and brutal crackdown, which has seen tens of thousands of peaceful protestors detained, over 100 news websites blocked, and media outlets banned. To date, BAJ has recorded that 497 journalists and media workers have been arrested, with over 29 still in detention. There have also been 68 cases of physical violence against journalists resulting in injury.

IFEX’s recently-published Regional Spotlight outlines how the regime’s crackdown has been challenged at every turn by small groups of journalists and activists in the diaspora, using digital tools and social media to ensure that Belarus-based supporters of the opposition – as well as ordinary citizens – can access uncensored information, that they can organise, and that they can find financial, legal or other kinds of assistance if they themselves are targeted by the authorities.

Many IFEX members marked the 1-year anniversary of the fraudulent election in Belarus by calling on international institutions to do more to protect the human rights of Belarusians:

Last week, IFEX joined 13 rights groups in calling on the international community to step up efforts to pressure Belarus authorities to change course and respect the human rights of the Belarusian people