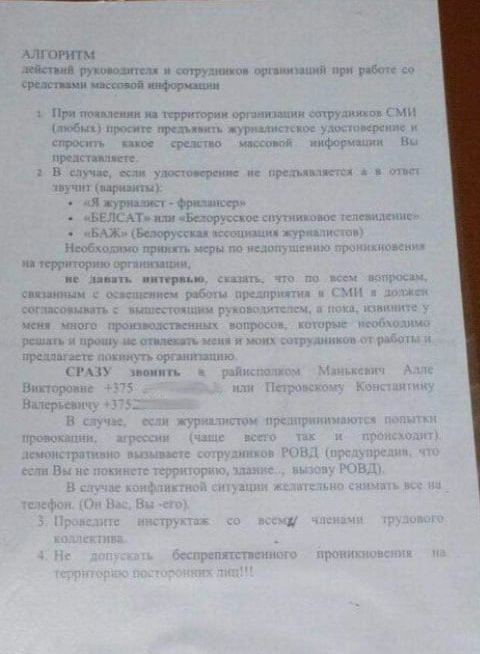 Its authors strongly recommend heads of local enterprises and collective farms not to grant interviews to Belsat TV contributors, freelancers and representatives of the Belarusian Association of Journalists (BAJ). The document even includes some prompt statements: ‘Please do not distract me from my work’ and ‘I am calling the police!’

According to the document, if journalists start ‘provoking’, officials should contact Ala Mankevich, the head of the ideological department at the Svetlahorsk district executive committee, or Kanstantsin Pyatrouski, a deputy chairman of the committee.

“I have never published such documents; I do not know how my phone got there. It may be some fake,” Ms Mankevich said.

No one hinders journalists from working in Svetlahorsk district, she added.

“It is the first time that the document of this sort has appeared on the Internet, but our journalists face such situations very often. The police is called, officials refuse to comment – the atmosphere of total secrecy is created. But we must not forget that in 1986 a similar political climate led to the fact the society was not informed of the вшку radiation hazard,” he said.

The BAJ representative also points out that such treating journalists has become an everyday occurrence in our country.

“In a few days, the European Games will kick off in Belarus, but its authorities still do not behave in a European way. All over the world, editorial offices cooperate with freelance journalists, but only in Belarus freelancers are unwelcome. The Belarusian authorities have retained a discriminatory approach to individual journalists, editors and even journalists’ association. This is unfair and illegal. But unfortunately, this is our reality,” Haretski stressed.

Over the recent months, Belsat have been closely following the developments around a bleached pulp plant in Svetlahorsk. In May, our channel directed public attention to poor working conditions in a local bus park.