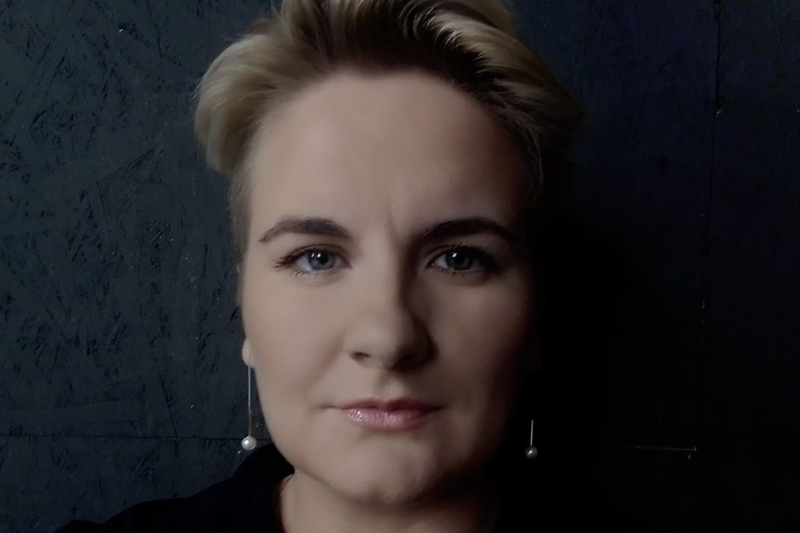 Scharbinskaya told CPJ she was beaten so severely that she was hospitalized after she was released without charges on August 13. According to data compiled by the Belarusian Association of Journalists (BAJ), at least 29 of the approximately 68 journalists who have been detained since the August 9 election were brutalized by police.

CPJ called Akrestsin, officially the Center for the Isolation of Offenders, for comment but nobody picked up.

CPJ interviewed Scharbinskaya by phone on August 15. Though still in the hospital, she said she was in relatively good condition. Two days later she wrote CPJ via messaging app that she was feeling worse, with a high fever. Her answers have been lightly edited for length and clarity.

How were you detained?

Late in the evening of August 10 after reporting on protests for Belsat, I was outside the police station waiting in line with a colleague who wanted to file a complaint about her missing husband. Her husband is also a colleague of mine at Belsat, where he works as a camera operator. Suddenly, two police vehicles stopped near us and people in black jumped out. It was OMON, a special police unit. One of the police officers forcefully grabbed my left arm and started literally dragging me to the police bus. I had my phone in my right hand, and managed to look at it — it was 10:23 p.m. When the police officer noticed that I had my phone, he took it with such force, it hurt me badly.

Then the officers stuffed the police bus with all the people who were near the police station, including myself. In the bus, the OMON officers were a little more gentle as there were some seniors inside. They drove us for some time through the city and then transferred us to another vehicle which had several closed compartments. They separated women from men. The section where they placed us was tiny, with too little space for so many people. We could hardly breath. Blood was on the walls of the vehicle, at least in my compartment. Then they drove us to Akrestsin, the main detention center in Minsk, and left us there.

First, they put me and other women in a section called “karcer,” a sort of small yard with walls and barbed wire instead of a ceiling. They took away our belts, shoelaces, chains, and such things. Then they started summoning us inside for search and inspection, one after the other. I was the first one to be inspected by a female OMON officer who has become known all over Belarus for her particularly cruel treatment of detainees. Journalists are now trying to identify her. Her name was either Kristina or Karina. As she was taking me to the inspection room, “Kristina” was pushing me and hitting my back with a baton. She intentionally chose the parts of my body where it would hurt the most.

After the inspection, when I was still half-naked, she pushed me out of the room and through a corridor full of naked men with their hands behind their backs, facing the wall. Their bodies and heads were covered in blood. There was a lot of blood. It was clear that they were badly beaten. There were men who were moaning, some couldn’t help but shout from pain. Police officers addressed them only in curses.

Where were you taken after that?

Women were taken to different prison cells, apart from the men. I was placed in cell number nine on the second floor, in the section of Akrestsin where people who were accused of violating public order laws are kept. It was a cell of approximately 12 square meters [about 129 square feet] with two bunkbeds for four inmates. But we were 26 people in there. Many of us had to sleep on the floor. The first 24 hours, they did not give us any food. The only thing we had was tap water with a strong chlorine taste. There was no toilet paper. It was very stuffy and hot in the cell. On August 11, they brought more women into the cell, and at one point there were some 50 women inside. There was no place to sit; we had to stand.

Can you go into further detail about your treatment?

You are in the hospital now. What’s your condition?

As I was being released, I fainted because of terrible pain. I was taken to the hospital. The doctors say that there are huge inner injuries in the lower part of my body, hematomas and bladder injuries. I also feel pain in my back as “Kristina” had beat my back with a baton.

How do you explain the cruelty?

I don’t know. When they were beating us, they were saying, “You go to rallies because you want to overthrow the government.” They were telling us, “The authorities are good. You want to organize another ‘Ukraine’ in Belarus. You want blood. You want to organize another ‘Maidan’ in the country,” [referring to the 2014 Ukrainian revolution, largely centered at Independence Square in Kyiv, also called Maidan square, which resulted in the ouster of Ukrainian President Viktor Yanukovych].

How long will you have to stay in the hospital?

First, about the hospital. There are many men in the hospital. They were all beaten so badly, it’s shocking to look at them. Some of them have serious life-threatening injuries. I walk around the hospital and talk to patients as a journalist.

I know one man, here in the hospital, who was raped with a police baton. The men here in the hospital tell about the OMON officers’ behavior in police cars. [They say] the officers would throw one detainee on top of another and walk over their bodies.

Compared to the men in the hospital, I can say that I am in good condition as I have nothing but a hematoma and pain in the lower part of my body. But the doctors have to do some additional tests and then they will decide what should be done. The doctors are afraid that after such beatings, internal bleeding may start.

What do you feel toward OMON?

There is such a huge feeling of hatred inside me. I never felt like that before. I will try to get rid of it, maybe work with a psychotherapist. This feeling is destroying me. But I will not stop my work, I am not frightened as a journalist though I understand that everything may start again, and I may suffer much more than I did now. No, they did not frighten us.