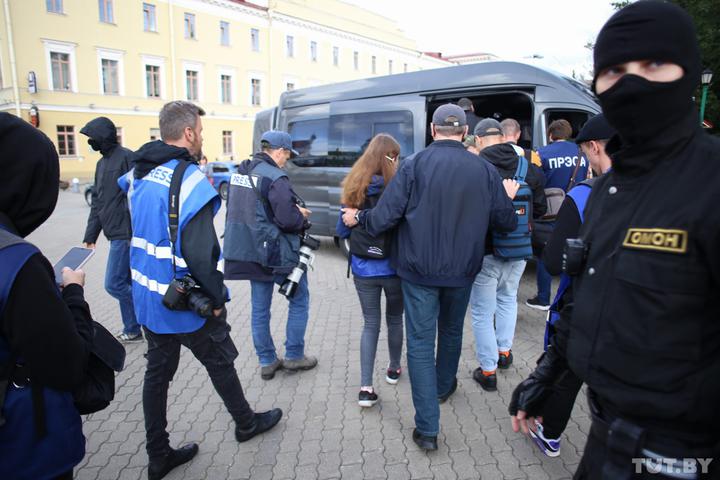 Ilia Kuzniatsou and Russian citizens Sergey Sergeyev and Mikhail Fomin (all three were accredited by the Belarusian Foreign Ministry as journalists of the ARD TV channel) were detained in Minsk the day before. The journalists spent the night at the police department, they were released only in the morning.

- Drew up a protocol under Art. 23.34 - active participation in the mass action and was deprived of accreditation "in order to ensure the information security of the country," Ilya Kuznetsov told TUT.BY.

According to Ilya, his Russian colleagues are deported from Belarus, banned from travelling to Belarus for 5 years.

The Russian journalists were picked up by a representative of the Russian embassy. It is not yet known when the trial of Ilya Kuznetsov will take place.

The foreign ministry accreditation, which allows them to legally work in the country, was also deprived of the BBC journalists Tatyana Melnichuk and Tatyana Yanutsevich.

- They called in the morning from the Ministry of Foreign Affairs, they said that according to the decision of the Interdepartmental Commission on Security in the Information Sphere, accreditation has been canceled from today, - Tatyana Melnichuk told TUT.BY. - When asked what I was guilty of, they answered that they were instructed to convey only this information.

Radio Svaboda informs that by the decision of the same commission its correspondents Ales Dashchinsky, Oleg Gruzdilovich, Vladimir Gridin, Aleksandra Dynko were deprived of their accreditation.

Vasily Fedosenko (Reuters), Sergey Gapon (AFP), Gennady Sharipkin (RFi) are also on the list of those who have their accreditation canceled.

The day before the famous Swedish photojournalist, winner of World Press Photo Paul Hanson was also deported from Belarus with a ban on entry for five years.

Hanson was detained on 27 August. On that day, more than 50 journalists were detained in Minsk, including the correspondents of TUT.BY. The Belarusian Association of Journalists appealed to the head of the Investigative Committee with a demand to initiate a criminal case for obstructing the lawful professional activity of the journalist.