Political prisoner, author of YouTube channel “Slutsk for Life,” Uladzimir Nyaronski is standing trial in Lahoisk. This is the first trial in the “Tsikhanouski case,” reports Spring96.org 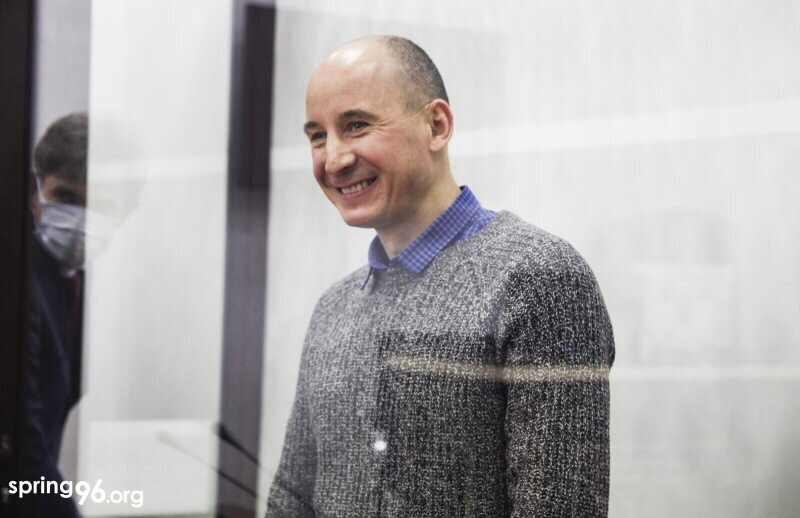 Political prisoner Uladzimir Nyaronski is accused of organizing “illegal public events” all over Belarus; he is charged under Part 1 Article 342 (“Organization and preparation of actions, seriously violating public order, or active participation in them”). In addition, the author of YouTube channel “Slutsk for Life” is accused of publicly insulting the chairman of Slutsk District Executive Committee Andrei Yancheuski (Article 369 of the Criminal Code “Insulting a public officer”). The case of Uladzimir Nyaronski is heard by the head of Lahoisk district court Alyaksandr Rybakou.

Investigators believe thatUladzimir Nyaronski is an activist of the “Country for Life” and that he allegedly met with Syarhei Tsikhanouski on 2 February last year, with whom he distributed the roles in the crime.

At the trial Uladzimir Nyaronski said that while running the youtube channel he was threatened with imprisonment by KGB officers. And he called his detention in the cell a torture.

“I spent 252 days in jail. I spent 60 days in solitary confinement. I showered 21 times during this time. I was moved 12 times, had 24 full searches, spent 5 days in the open air. I went through 50 courts, 90 prisoners. To live in the same house with thugs and remain human… In those 252 days I never regretted going to prison. I apologize to Mr. Yancheuski, I was in fact wrong.

Prison is good for a man, but after six months a man gets used to prison and he considers it his second home. After six months a person forgets about freedom at all. It is useless to scare me with prison, I don’t want these trials to continue. I’m not afraid of prison. I just want to ask my relatives for forgiveness.

There is no heating in my TDF. We shave our heads so we don’t get lice. In Akrestsina they kept me for three days in a special cell, where I was eaten by bedbugs. This is done with political prisoners. We are already rolling into the abyss, this is wrong,” said Uladzimir Nyaronski.

Uladzimir Nyaronski was detained on May 6, 2020 near Minsk. On May 8th , the Kastrychnitski District Court of Mahiliou sentenced Nyaronski under Article 23.34 of the Administrative Code to 10 days of administrative arrest. He was not released after that. On 17 June it was reported that Uladzimir Nyaaronski was placed in detention center #1 in Valadarski street of Minsk as part of the criminal “Tsikhanouski case”.