EFJ President: This conviction is intended to intimidate the entire profession, to criminalise journalism

Two Belarusian journalists sentenced to two years in prison for doing their job. 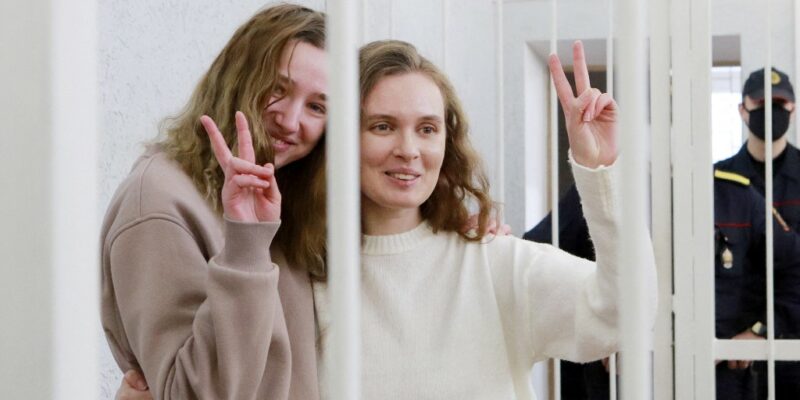 Catarina Andreeva and Darja Chulcova, two journalists for Belsat, the Polish satellite television station aimed at Belarus, have each been sentenced on 18 February to two years in prison for reporting live from an anti-government rally in Minsk in November. The European and International Federations of Journalists (EFJ-IFJ) and their affiliate in Belarus, the Belarusian Association of Journalists (BAJ), strongly condemn the criminalisation of journalism by President Lukashenko‘s regime and call on the international community to react firmly.

In accordance with the request of prosecutor Alina Kasyanchyk, judge Natallya Buhuk of the Frunze district court in Minsk, sentenced Catarina Andreeva and Darja Chulcova after finding them guilty of “organizing public events aimed at disrupting civil order.”

The two journalists were arrested on 15 November while they were covering a rally in Minsk. The EFJ and IFJ have recognized Andreeva and Chulcova as political prisoners and demanded their immediate release and the dropping of all charges against them.

In their last statement in the courtroom, Andreeva and Chulcova rejected the charges against them, calling them politically motivated. Andreeva also demanded the “immediate release” of herself, Chulcova, and “all political prisoners in Belarus.”

“We consider the verdict as politically motivated, aiming to intimidate all media workers so they stop doing their job of reporting on socially important events in the country, which in fact means a ban on the profession,” reacted BAJ.

BAJ, the EFJ and the IFJ demands :

“This conviction is intended to intimidate the entire profession, to criminalise journalism. The repressive drift of dictator Lukashenko’s regime requires a rapid and firm reaction from the international community. We once again call on the European Union, the Council of Europe and the OSCE not to be complicit in the regime’s abuses,’ said EFJ President Mogens Blicher Bjerregård.

The EFJ is organising a solidarity conference with BAJ in which all European journalists’ unions and associations will participate on Thursday 18 February at 1 pm.