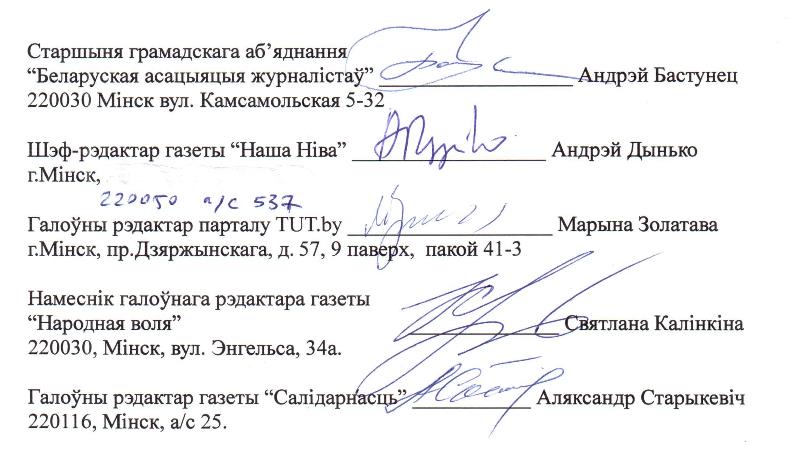 The media representatives want to talk about the role of mass media; they mention a program Editors’ Club, dated February 7, was dedicated to the issue of freedom of speech; the editors think that in the program, journalists of non-state media were mentioned several times in negative light; journalists were split into antagonist groups, labeled with negative notions, generally, those who “do not stick to the position of the state” were derogated. The petitioners demand to give word to independent media representatives on the state TV, to discuss the issues reflected in two latest programs of the Editors’ Club. The letter was addressed to Henadz Davydzka, chair of the BT.

The previous program of the Editors’ Club was dedicated to the recent incident when a correspondent of TUT.by was beaten in a building of court. In fact, the chief editor of newspaper SB.Belarus Segodnya (Soviet Belorussia, top newspaper in terms of circulation) Pavel Yakubovich and the head of BelTA news agency Dzmitry Zhuk picked the side of the policemen. Only editor of Komsomolskaya Pravda Halina Malisheuskaya insisted that journalists are not to be beaten. The latest issue of the Editors’ Club sounded like “why mass media escalate hysteria and why they targeted at the police”; one of the guest speakers was Minister of Information Liliya Ananich.