Judge of the Oktyabrsky district court in Mogilev Olga Kravchenko found Brest bloggers Sergei Petrukhin and Alexander Kabanov guilty of organizing and preparing actions that grossly violate public order, insulting a government official. Petrukhin was also found guilty of insulting a judge. Both were sentenced to three years in a general regime colony. The bloggers were not present during the hearings: they were removed from the courtroom at the beginning of the trial. The judge rejected all petitions for the participation of the accused in the process. 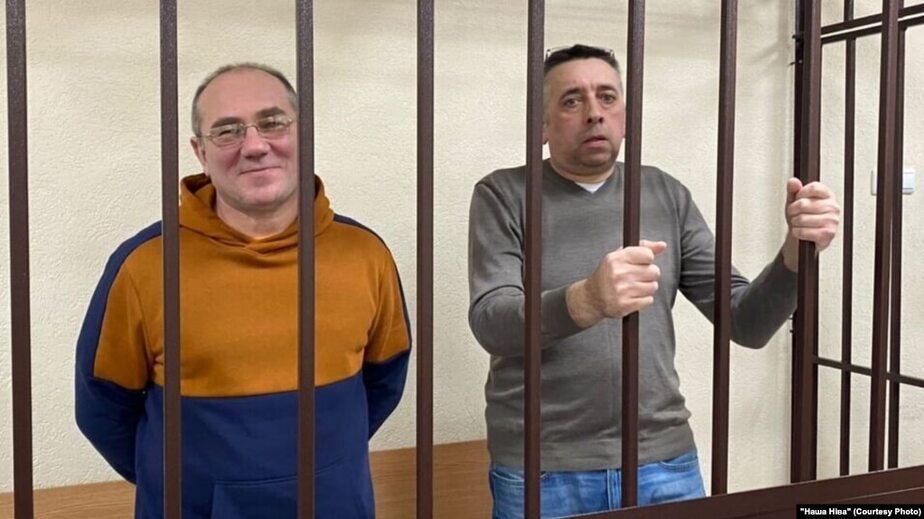 The investigation and the prosecutor’s office believe that mass protests throughout Belarus in 2020 sparked, among other things, because of Petrukhin and Kabanov, who acted jointly with Sergei Tikhanovsky, Nikolai Statkevich, and Pavel Sevyarynets. The defense of the defendants called the accusations speculation, the facts cited by the state prosecutor – taken out of context and insisted on ending the criminal prosecution.

According to the investigation, Petrukhin and Kabanov filmed videos about the problems of the Brest region and the protests of Brest residents against the construction of a battery plant and posted them on the Narodny Reporter YouTube channel. In 2019, they met Sergei Tikhanovsky and met with him on August 14 in the village of Gorodishche, Pinsk District – this was confirmed by the billing of mobile operators.

Prosecutor Amosova further said that “Kabanov met with Tikhanovsky more than once,” but cited only one such case as an example – “in 2020 in Brest during a protest action accompanied by a direct stream of Tikhanovsky.” The accusation states that Kabanov and Tikhanovsky then talked in messengers –  they discussed the Strana Dlya Zhizni [Country for Life – Ed.] channel, Tikhanovsky’s intention to participate in the presidential elections, and the Kabanovs’ assistance in holding pickets to collect signatures for the nomination of presidential candidates. This correspondence was retrieved from bloggers’ phones.

As the “irrefutable and reliable evidence” of the guilt of Petrukhin and Kabanov, the state prosecutor cited wiretapping and correspondence of several people. Sergei Tikhanovsky and Nikolai Statkevichs’ plans to meet in Minsk and Brest, organization of pickets to collect signatures during the presidential campaign. Comments by phone from Statkevich to journalists about his vision of the presidential campaign and plans for it.

“Registration of initiative groups and holding pickets were a cover-up for real actions related to the organization of large-scale long-term protest actions throughout the republic, which should have begun simultaneously with the start of the election campaign,” stressed Amosova.

Petrukhin and Kabanov, among other things, “jointly carried out coordinated, purposeful activities to create socio-political tension in the country on the eve of the 2020 elections, to form a false idea among the citizens of the republic about the illegitimacy of the actions of representatives of the authorities and administration, including the actions of the country’s top officials, civil servants, law enforcement officers ”.

Recall that Brest blogger of the Narodny Reporter YouTube channel Sergei Petrukhin was detained in a village near Pukhovichi on 16 June. The 49-year-old is accused of organizing group actions that grossly violate public order, of insulting a government official in connection with the performance of his official duties and of insulting a judge. Alexander Kabanov is accused of the same crimes. Kabanov disappeared on his way to a polyclinic on 15 June. He was sentenced to 15 days of arrest and was finally found several days later in a detention centre in Minsk.

The trial of the Brest bloggers began on 11 February. Journalists from non-state media were not allowed into a courtroom. The judge removed Petrukhin and Kabanov from the courtroom too. According to the indictment, the defendants posted a photo of the policeman Vitaly Avtushenko with offensive comments on the YouTube channel. The policeman is recognized as a victim and is trying to recover 1,5000 for moral damage.

A photo of the security official appeared on the internet after his participation in the arrest of blogger Sergei Tikhanovsky on 6 May. Avtushenko insists that the commentary in the video demonizes him and insults his honour and dignity. The policeman told the court that his neighbours stopped talking to his parents after the photo emerged online.

“I began to worry about my family and friends, because I am a representative of law enforcement agencies and I am afraid that third parties can harm them,” Vitaly Autushenko said in court.

Another victim in the process is judge of the Brest Regional Court Andrei Leshchenko, who was reportedly insulted by Sergei Petrukhin.