Minsk department for combating economic crime has drawn up a report on “Belsat” cameraman Alyaksandr Barazenka “for violation of copyright, related rights and patent” (Article 9.21). Now he faces a fine of from 460 to 1,150 BYN. 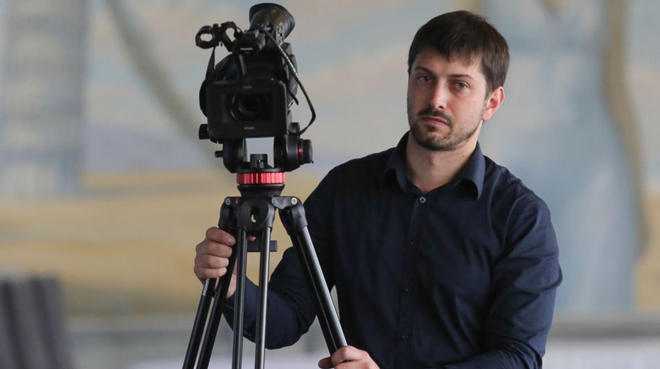 Law enforcement officers want to make our colleague defenant in the case of copyright infringement related to the brand of “Belsat”. The cameraman believes that “the case was launched to confiscate the equipment he is using”.

“There is no corpus delicti in my actions,” says Barazenka. “They just want to deprive me of the opportunity to work using this equipment”.

In March 2017, the police detained another cameraman, Aliaksandr Liubianchuk , for questioning from the Minsk office of “Belsat”. Aliaksandr has a Belarusian MFA accreditation. They took away all his personal equipment, and took all the computers out of the ‘Belsat’ office.

Alyaksandr Barazenka was interrogated in the Akrestsina jail, where he was at the time.

“The police want to put all the blame on one man — our cameraman,” – says Belsat producer Alaksiej Minchonak.

The case about the “Belsat” trademark has lasted for almost five years. According to the “BELSATplus” company owner, our channel has violated the interests of his business. The businessman appealed to the Supreme Court of Belarus, but it did not satisfy his demands.

Then “BELSATplus” company owner tried to ban our channel from using the “Belsat TV” trademark. But the Supreme Court dismissed the claims.

Re-examination of the case was initiated by the Presidium of the Supreme Court, and the case was heard by another panel of judges. On September 4, 2014,the court granted the appeal of Andrey Belyakou and banned our channel from using the “Belsat TV” trademark for broadcasts on the territory of Belarus and on the web page.