Belsat TV journalist Darya Chultsova got released after serving a full two-year sentence in a women’s penal colony in Homiel. She was convicted, along with journalist Katsaryna Andreyeva, for covering the demonstrations in Minsk on November 15, 2020. The authorities accused them of controlling the riots. 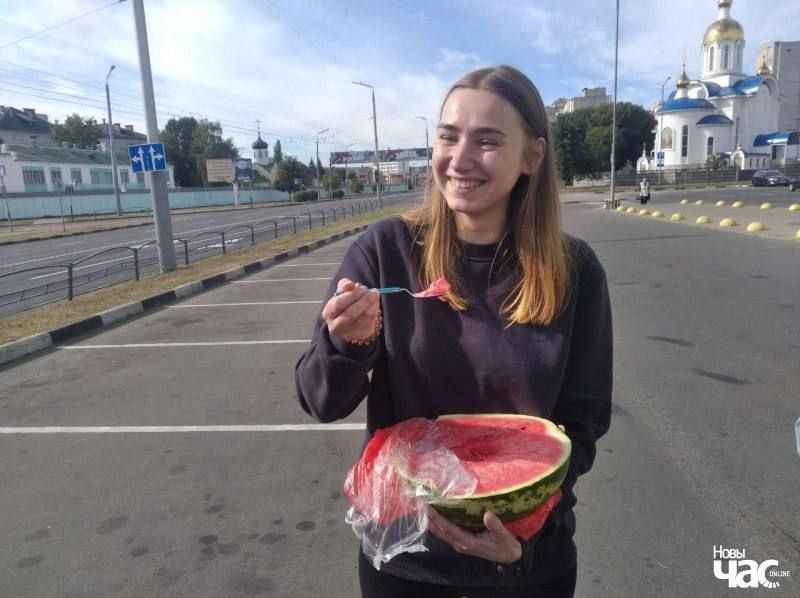 Darya Chultsova was born and raised in Shklou. The same region in eastern Belarus, by the way, is the tiny homeland of Alyaksandr Lukashenka. According to her mother, Natallya Tserabilenka, Darya is a very determined person, absorbed in passions since childhood:

“Darya loved to draw as a child. She even went to art school. Drawing transported her to another world. Later she wished to buy a guitar and began learning to play it. But most of all, Dasha loved to write. She always had some notebook or notepad with her and wrote, wrote and wrote,’ Natallya recalls.

Natallya did not expect that Dasha’s writing interests would lead her where they did. When her daughter said she wanted to become a journalist, the family took it as a joke. In the final grade, Dasha repeatedly talked about her plans to become a journalist. That’s when her relatives really started to worry. Being an independent journalist in Belarus is a big risk. The parents even discouraged Dasha during the university admissions process. But that didn’t stop her.

“Dasha is very determined to pursue her goals. It may seem like she listens to me but still does things her way. Convincing her to do anything is very difficult. She believes that no one can tell her what to do. Now I often hear that I raised a fantastic daughter; people write to me about it,” Natallya says.

Dasha’s childhood friend Milana Minchukhova recalls that Dasha was always curious about everything around her.

“You could say that Dasha is an explorer. She combines such qualities as calmness and perceptiveness with curiosity in the most diverse spheres of life. She has always loved listening, reading, and drawing. And the moment came when these predispositions determined the choice of her profession,” says Milana.

While submitting documents to the Mahiliou State University, Dasha told her mother: “If it’s not journalism, I won’t study anything at all.” And so she began studying journalism. Dasha and her colleagues at the university were working on their own magazine. Even then, she was faced with choosing where and in what role she saw herself as a journalist. To decide, she needed time and practice.

“Together with Dasha, we started shooting material for the project ‘Mahilou. Online.’ It was a great time; we had a mission: to show the social problems of Mahiliou. And we succeeded. Then I saw that Dasha was burning with interest and had a talent not only as a journalist but also as a cameraperson,” says Dasha’s colleague from college, Krystsina Barysava.

Dasha and Krystsina highlighted various social problems in Mahiliou in their project. And, of course, they touched on politics.

“Everything we did was sincere. Dasha could spend half a day, or even a whole day – as much as it took – to make it perfect. At the same time, she sympathized with people and insisted on showing everything exactly as it really is,” explains Krystsina.

In 2019, Dasha began working with the Belsat TV channel. As a journalist, she worked in tandem with cameraman Mikhail Arshynski.

“We traveled to various cities in the Mahiliou region and filmed reports on the problems of ordinary people. We showed how people’s lives change when they come into contact with the bureaucratic system,” Mikhail Arshynski said, describing his cooperation with Dasha.

Being an experienced professional, Mikhail taught Dasha how to become a versatile journalist. As he pointed out, Dasha performed her editorial tasks consciously and without fear, which testified to her professionalism.

Repression against Dasha for her journalistic activities began while she was still in Mahiliou. Courts twice fined Dasha for working without accreditation for a foreign media outlet (Article 22.9 Part 2 of the Belarusian Code of Offenses). But this did not discourage the girl from working in the media.

Dasha only worked in Mahiliou during her studies. After graduating from university in September 2020, she moved to Minsk. It was a hectic time for the Belarusian capital. At the time, Minsk was the place of thousands of protests against the rigging of the presidential election. Darya began working as a camera operator. After moving to Minsk, she was repeatedly detained for her journalistic activities.

“In this respect, Dasha is a true Belarusian patriot. She went to all those protests, and that’s also how she expressed her love for her homeland. She knew that it involved a lot of risk for a journalist, but she went there anyway. The day before she was detained on November 15, I asked her if she was afraid. And Dasha said that only she and Katsya could go and do the job. So they went,” recalls Krystsina.

The journalists went to work for the last time on November 15, three days after the tragic death of opposition activist Raman Bandarenka, who died in the hospital after being beaten by the police. The opposition announced a massive memorial action in the courtyard in front of his apartment building, where Raman was brutally detained. Dasha and Katsya knew that all journalists were then the target of the police and services. And the authorities would do everything to prevent them from covering the event. The journalists were not frightened, and their live coverage, which became the reason for their trial and imprisonment, was watched by nearly 75,000 people. Thanks to them, viewers could watch the violent action of the riot police dispersing the protest and the moment of destruction of the Bandarenka’s memorial.

“They think they can do anything. They wanted to put journalists behind bars, and they did. And since there was nothing there, they fabricated a case. Katsya and Dasha got arrested for nothing; they were not guilty and just doing their job. They didn’t recruit people there; they didn’t persuade people to do anything,’ explains Dasha’s mother.

The journalists who covered the protest from the 13th floor of a nearby apartment building got accused of managing the riot and paralyzing public transportation. Belarusian human rights activists recognized the journalists as prisoners of conscience just four days after they got charged. In December 2020, the girls won the Belarusian human rights community’s “Journalist of the Year” award.

The investigation lasted three months. On February 18, 2021, Judge Natallya Buhuk sentenced Darya and Katsaryna to two years in a penal colony with mandatory labor. She ended up in a women’s colony in Homiel.

Always cheerful and smiling — even behind bars

October 26, 2021. Dasha had her first so-called long visit with relatives. From their social media feeds, we know what her stay in the penal colony was like. The day begins with a wake-up call at 6:00 am. Dasha was sent to the sewing room, where work had to be done in two shifts. In the penal colony, the journalist learned how to trace templates for blanks. She said she liked her occupation because it made the time pass faster. According to relatives, Dasha’s work in the colony was not very stressful, but it was almost unpaid. She received 41 rubles a month – or about $20 during the glazing period. When they went on their second shift, prisoners were tasked with peeling potatoes and cleaning.

Darya took part in the cultural and sports activities of the colony, in the Miss Autumn contest, led events and read poems in Belarusian – she tried to fill every minute. Dasha’s relatives said that the girl had practically no free time until 10 pm – then she took a shower and went to bed.

In the colony, Darya, like most political prisoners, was given the status of ‘prone to extremism and other destructive activities.’ Such an inmate is distinguished from others by a special yellow badge and is subject to tighter control. According to her relatives, even in prison, Dasha always tried to be cheerful, optimistic, smile and not provoke conflicts. She was not punished once and was never taken to a solitary confinement cell.

“I’m in prison; I have the right to rest,” she said

Due to the lack of free time, Darya could not read or write letters much — she did so at any free moment. Correspondence sent from the colony is subject to censorship, so she had to avoid writing about politics — she conveyed her feelings, dreams and plans for the future.

“I’m stuck in 2020. For me, time stands still. Only the number (2022) has changed, which I write on the documents where you put the date. I feel that I’m 23 years old, not 25 as I will soon be. It’s strange, and I guess it’s hard to understand unless you feel it yourself. I’m convinced that everything will come back when I’m home. There is just no real world here, and time passes differently,” she conveyed in one of her letters.

“As I told you today, everything is fine. In my life, I have always had the feeling that I had to do something. When I took a day off, I felt uncomfortable that I wasn’t working. Here I have the same feeling that I constantly have to do something. For example, to answer people’s letters. If I don’t do it, my conscience bothers me. Paint something for someone, write something, etc. constantly like in some kind of panic. Now I’m trying to push it away from me. I’m in prison, I have the right to rest, haha,” she wrote.

Prison did not make Dasha question her life choices. In her letters to her parents, she wrote that if she had known what her work as a journalist would lead to, she would have chosen that path anyway. And she always stressed that she wanted to return to media work after her release.