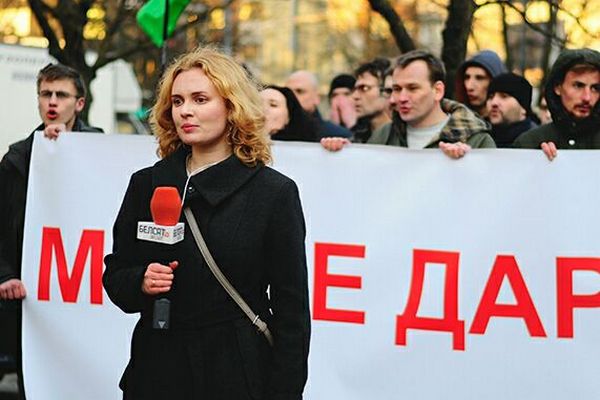 Belsat journalist Ekaterina Andreeva (our picture) will be tried in the Zavadski district court of Minsk on Thursday. She was detained while she was covering a protest rally on 14 July. She is accused of participating in an unauthorized rally (Article 23.34 of the Belarusian Administrative Code).

Freelance journalist Alyaksei Kairis, from Grodno, was called by the prosecutor’s office today because of his alleged participation in an unauthorized street action.

Siarhei Lyudkevich, a BelaPAN correspondent in Grodno, was summoned to the Investigative Committee on 26 August. He will be questioned on a criminal case under Article 342 of the Criminal Code (“Organization or active participation in actions that grossly violate public order”).

Alyaksei Kairis and Siarhei Lyudkevich were detained by police on the evening of 9 August while covering a peaceful protest rally in Grodno. They were taken to a detention center. On 10 August, the court found the two journalists guilty of violating the law on mass events (Article 23.34 of the Administrative Code).

BAJ points out that according to the Belarusian Law on Mass Media, journalists have the right to attend unauthorized rallies.

The wave of prosecutions of journalists follows an unprecedented wave of police violence. Since the beginning of the presidential election campaign, BAJ has documented 200 serious violations of press freedom in Belarus, including arbitrary arrests, deportations and physical violence.

BAJ reported at least 38 cases of journalists injured or beaten by law enforcement officers. At least two journalists have been injured by rubber bullets fired by police officers. Press photographer Natalia Lubnevskaya was injured in the knee by a policeman who deliberately targeted her, although she was clearly identifiable as a journalist.

“It is important to support victims of repression and demand that the Belarusian authorities desist with acts of violence,” said BAJ President Andrei Bastunets in an interview with Journalists For Tolerance and Article19.