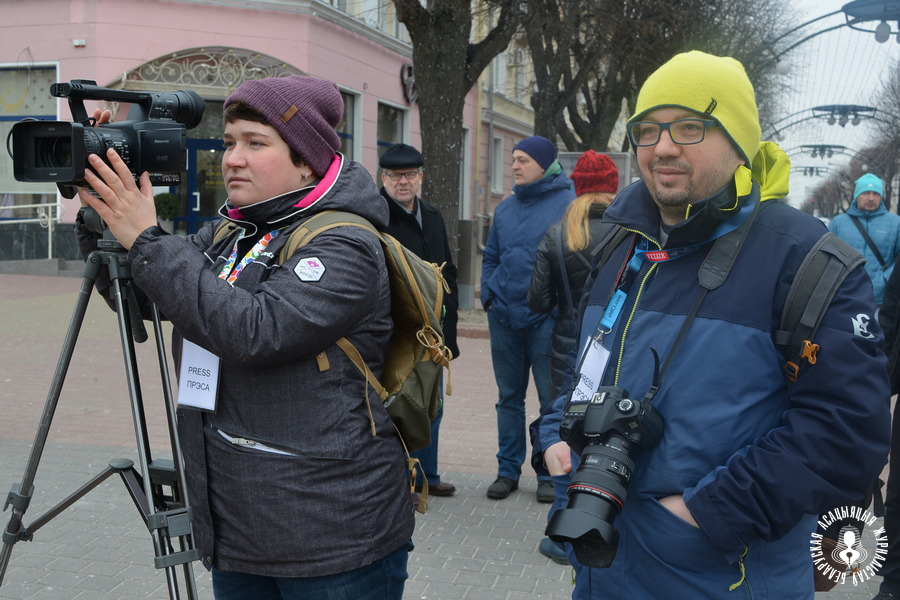 Judge Raisa Labacheuskaya slapped a fine of 2,250 Belarusian rubles (about $1,100) The trial was based on protocols drawn up by local policemen.

Ales Lyauchuk and Milana Kharytonava have been repeatedly spotted covering the protests against the construction of a battery factory in the city and interviewing locals. The crew has already had many trials over making reports about the situation in Brest.

“Earlier, the police tried to collect evidence, looked for witnesses, but now they just don’t care about such ‘trifles’. The materials of the case did not include information about the exact time of our being in the square, no names of people whom we had interviewed; there were no witnesses, but still, we have got a fine of 2,550 rubles,” Ales Lyauchuk said.

On March 3, being preventively detained in the run-up to a protest rally, the crew had to spend two hours in the police station. The officers drew up protocols on the Besat TV contributors for allegedly violation Art. 22.9 of the Administrative Code, i.e. their covering protests on February, 17. As a result, the duo stood trial on March, 21.

“I filed comptaints to the Investigative Committee and the Prosecutor’s Office, but all I have received from them is nothing but formal replies. For example, the Prosecutor’s Office sent my complaint back to be considered by the police department, the employees of which had detained us. I doubt they will admit their mistakes,” Lyauchuk told Belsat TV.

The Belarusian authorities have been exerting pressure on him and his colleague and wife Milana Kharytonava for over six months, the journalist stressed.

“It started in August last year, and they have been persecuting us for more than half a year. They prevent us from performing our professional duties and leave us no space for normal life. I think their goal is to make us stop contributing to Belsat, or even emigrate,” he added.

A year ago, Brest residents started protesting against the construction of a hazardous battery factory by the iPower company. As the city authorities outlaw protests, people do not make speeches or chant any slogans – they just feed pigeons or carry baloons.

Because of the work in the ‘partisan’ conditions, Belsat employees are often on trial for illegal production of media materials and work without accreditation.