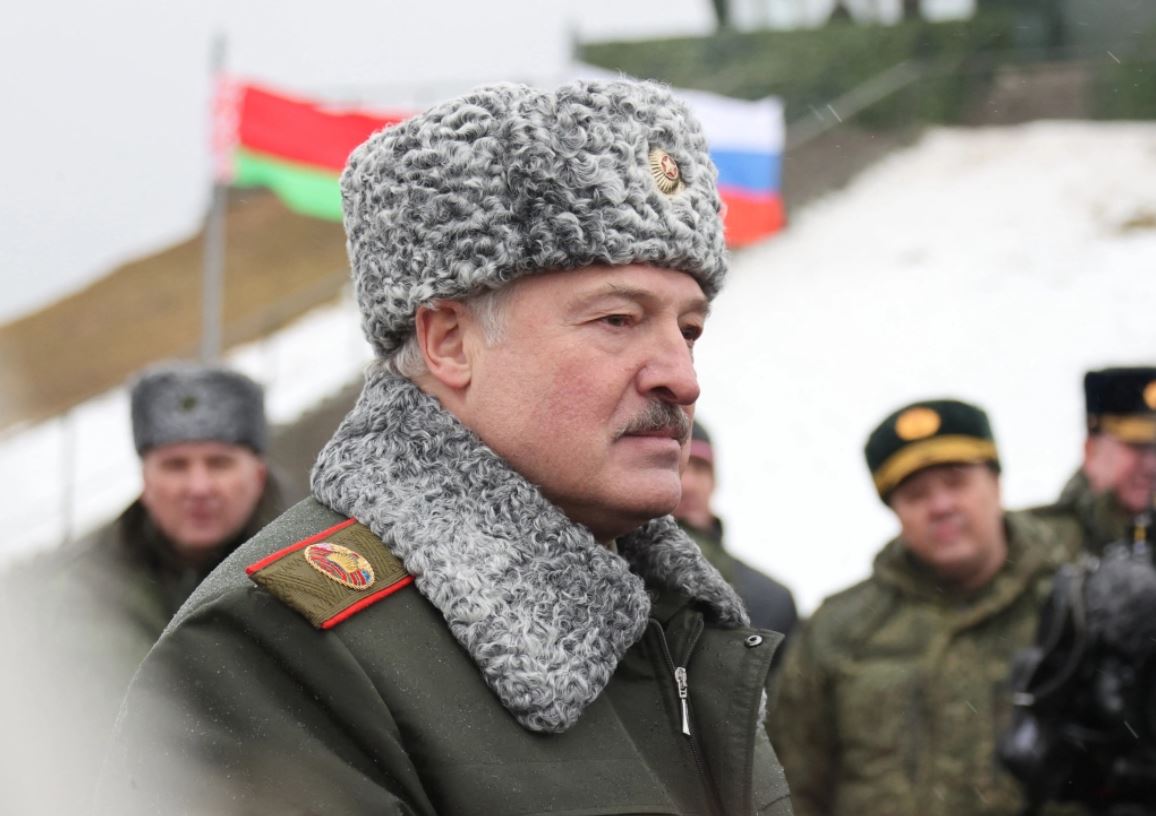 Belarus' President Alexander Lukashenko attends a joint exercises of the armed forces of Russia and Belarus outside the capital Minsk on February 17, 2022. Belarusian authorities have sentenced journalist Aleh Hruzdzilovich to prison and designated more media as "extermist." (Maxim Guchek/Belta via AFP)

On March 3, the Savetski District Court in Minsk sentenced Hruzdzilovich to a year and a half in prison for alleged participation in three protests in 2020, according to the Belarusian Association of Journalists (BAJ), an independent trade and advocacy group, and a report by Radio Svaboda.

Hruzdzilovich denied the charges, saying he was working as an accredited correspondent with Radio Svaboda and wearing a press jacket during the first protest, according to those reports. After authorities revoked the accreditation of Radio Svaboda journalists in August 2020, he covered the other two protests for independent newspaper Narodnaya Volya, as the newspaper’s chief editor testified in court.

Authorities in Belarus launched an unprecedented wave of repression against media outlets and journalists following popular protests against the disputed presidential election in August 2020, as CPJ has documented. The designations of DW and Regionalnaya Gazeta as extremist takes the number of media outlets labelled as such to 20, which include major outlets such as Radio Svaboda, Belarus’s largest news agency BelaPAN, the country’s most popular news website Tut.by and its mirror site Zerkalo.io, and broadcasters Belsat and Euroradio, according to a list sent to CPJ by BAJ and CPJ reporting.

“The label ‘extremist’ in Belarus has long become a synonym for anyone, especially media outlets, who dares to offer an independent picture of the violence President Aleksandr Lukashenko has unleashed against his own people over the past 18 months,” said Gulnoza Said, CPJ’s Europe and Central Asia program coordinator, in New York. “Authorities in Belarus must immediately remove the work of Deutsche Welle, Regiyanalnaya Gazeta, Yury Dud, and all other news outlets from their register of extremist materials and stop using the country’s extremism legislation to silence independent journalism.”

“We call on Belarusian authorities to immediately release journalist Aleh Hruzdzilovich, drop all charges again him, and stop prosecuting members of the press for their coverage of important news events,” Said added.

On January 20, a court in the Maladzechna district near the Belarusian capital Minsk declared the website and Telegram channel of local independent news outlet Regiyanalnaya Gazeta extremist, according to news reports and a report by BAJ, and on February 24, the court declared 15 of the outlet’s articles from 2020 extremist, the BAJ report stated.

Regiyanalnaya Gazeta closely covered the 2020 protests and subsequent trials of protesters in the Maladzechna district and seven other nearby districts, according to an interview with the outlet’s chief editor Alyaksandr Mantsevich by Radio Svaboda from 2021. CPJ was unable to open Regiyanalnaya Gazeta’s website.

On Wednesday, March 9, the Central District Court in Minsk declared all “information products” by DW extremist, effectively banning the broadcaster in the country, according to news reports and a Telegram announcement by the Main Directorate for Combatting Organized Crime and Corruption (MDCOCC) of the Interior Ministry of Belarus, on whose application the case was heard.

Under the ruling, all media produced by DW and its Belarusian Telegram channel and chat group, including the “DW” logo, are to be recognized as “extremist,” these reports stated. DW has been blocked in Belarus since October 2021, according to those news reports.

Anyone convicted of producing, storing, or spreading materials designated extremist can be fined up to 960 rubles (US$290) or detained for up to 15 days, according to the administrative code of Belarus; legal entities will be subject to a fine of up to 16,000 rubles (US$4,844) for the same offenses.

Despite the designation, DW intends to continue its reporting on Belarus as normal, according to an announcement on the broadcaster’s Belarusian Telegram channel. CPJ emailed DW for comment but did not receive a reply.

In a statement released Thursday, March 10, the broadcaster’s Director General Peter Limbourg denounced the designations, describing them as “cheap tricks to create pseudo-legal grounds to take action against people who make use of their right to free speech,” adding that the criminalization of the DW logo “proves how nervous the regime [in Belarus] is.”

As in previous such instances, the MDCOCC announcement about DW warned of prosecution even for subscribing to Telegram channels and chats of outlets designated as extremist. Aleh Aheyeu, Deputy Director of BAJ, told CPJ by messaging app that he is not aware of anyone who has been prosecuted for this offense alone; however, any material downloaded, even automatically, from apps such as Telegram could be prosecuted as storing extremist material, according to a report on the association’s website.

Separately, the MDCOCC announced Thursday, March 10, that the Central District Court had declared three videos published by popular Russian blogger Yury Dud, who has almost 10 million subscribers on his YouTube channel vDud, as extremist. The videos, which have over 30 million views, report on a Belarusian stand-up comic who fled the country and performs anti-Lukashenko material, ordinary Belarusians who have also been forced to flee, and the Telegram channel NEXTA, whose founder Raman Pratasevich was arrested after Belarusian authorities downed a commercial flight specifically to detain him.

CPJ called the Ministry of Interior’s press service for comment, but no one answered.

Authorities previously jailed Hruzdzilovich for 15 days in 2020 for participating in another protest that he was covering as a journalist and detained him for 10 days without charge following a raid on Radio Svaboda’s Minsk office in July 2021, the Radio Svaboda report stated.