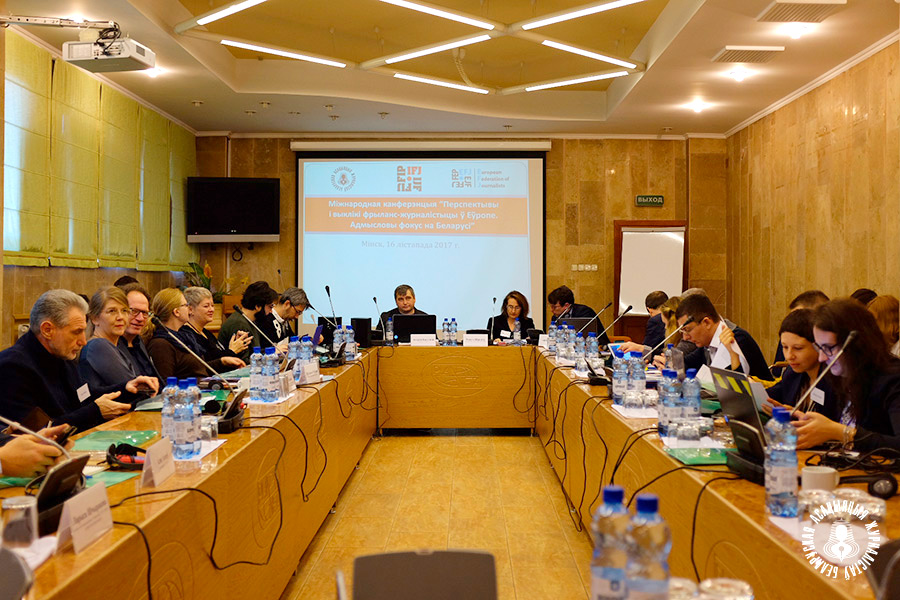 "The number of freelance journalists is growing irreversibly. In some countries, freelancers outgrow staffers in numbers.  However, freelancers are facing more and more challenges. First of all, this is the lack of social security, lower income, and lack of guarantees. This job is not only about challenges, but also chances" — Bastunets said.

BAJ leader reminded that persecution of freelancers was the most painful point for the time being. Since the beginning of the year Belarusian journalists received more than 55 fines for cooperation with foreign media without accreditation.

"Over many years BAJ has shown incredible courage and determination in their standing up for the freedom of expression. Members of this organization have faced tremendous threats, but have worked hard to keep alive the principles of the journalism that serves no interest other than the public interest.

Belarus is one of the most hostile media environments, intimidation and persecution of reporters have been the norm for years here.

The authorities have put in place a repressive legal framework. While progress may have been noticed in 2016 with a limited amount of journalists detained or fined, the situation was much worst this year following the wave of protests against the unemployment tax bill," Adrien Collin pointed out. 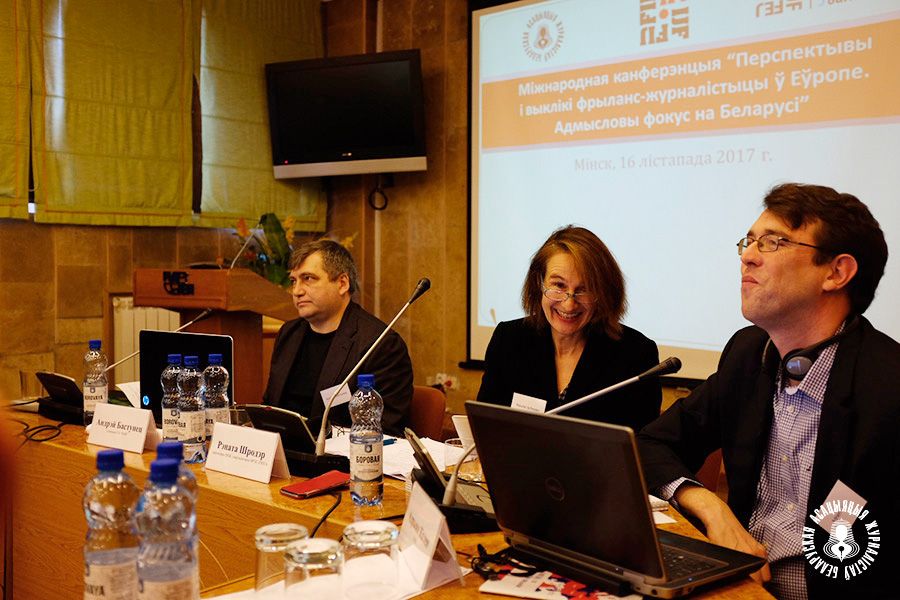 Also, the subject of the day is the fact that journalists working as freelancers can not operate freely in the country, as the state routinely refuses accreditation to independent journalists and harasses those who work with foreign media. The IFJ calls today on the government to remove all obstacles to the exercise of a free and independent media.

Allowing the registration of news media outlets and the accreditation of journalists should be a priority. We demand that the existing law and especially Article 22.9 of the Belarusian Administrative Code which forbids freelance journalists from operating is removed.

"We are here today to discuss the ways to help our colleagues of BAJ to defend these fundamental rights. How can we put the issue of freelancers on the map of local authorities as well as European institutions? Which campaigns and activities should we conduct to defend the basic rights of freelancers in Belarus both at the national and international level?

Over the world, the IFJ seeks to boost journalism and freedom of expression. We use the BAJ as a model for how to serve and motivate your members to stick with journalism.  But BAJ needs our solidarity to overcome the current situation. I hope we will find practical ways to respond to these challenges," — Adrien Collin said.

"This year the European Parliament adopted a resolution on the persecution of more than 120 journalists. This is also the result of cooperation of EFJ and BAJ. We will report to the European Parliament and included this meeting in the report. I hope for some progress. The EU and Belarus started a dialog on human rights. And we have some optimism. We also cooperate with the OSCE on the media situation. Dunja Mijatovic addressed the Ministry of Foreign Affairs of Belarus on the harassment of journalists, and the Foreign Ministry just said that journalists were not allowed to work without accreditation. Period. Nothing to explan or justify that," Renate Schroeder said.

Larysa Shchyrakova from Homel spoke about the challenges faced by a Belarusian freelancer. 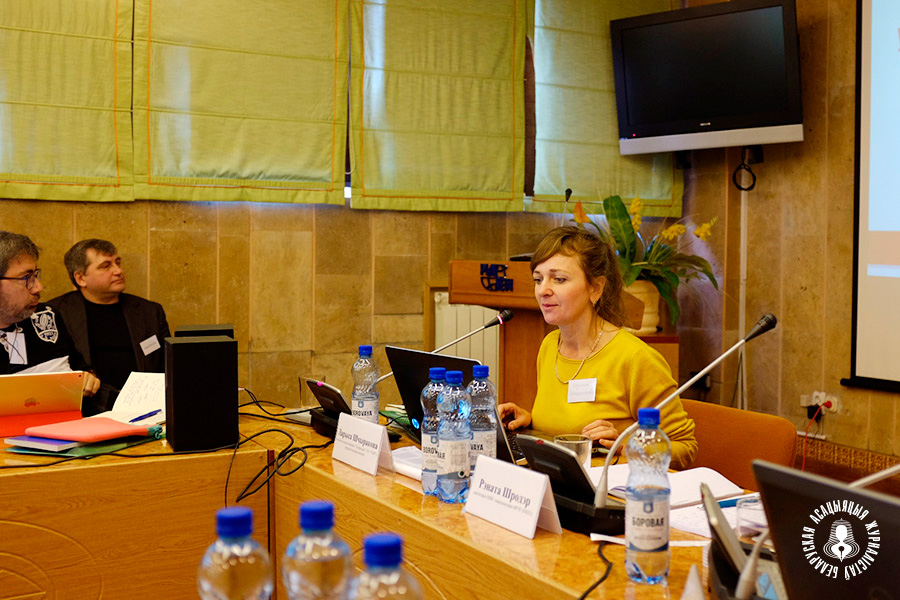 "The greatest challenge is that "they give you no chance to live a normal life," Larysa began. She further referred to the numerous trials, cases of harassment by police, and psychological pressure: "Sometimes even getting to the venue of the protest and working there is a real city quest. For example, one day I had to spend a night at a friend's home, as I saw the police was monitoring the entry to my and my parents' houses. The next day when they detained me, the first question from the police chief was, "Where did you sleep today?" It is important for me to be there and to cover the events. I love this job, I like covering the social activity: Belarusians were in lethargical sleep for many years and finally they came out, they express themselves. I really enjoyed covering those street actions."

"It's not very typical for Belarusians, but I felt a huge wave of solidarity. One day after the trial, a woman approached me and gave me money as a support. People attended my trials. Several people were arrested for supporting me. But people get tired of attending the neverending trials. This year, in Rechytsa they summoned me on April13, my birthday. I think it was done on purpose.

Also, the police threatened me to take my son away. When the public learned about that from the media, their reaction was strong. I used underestimate how the media influence the public opinion. I think they did not go any further thanks to the big wave of solidarity ", said the journalist.

Larysa also spoke about dissemination of slanderous information on the Internet and publication of details of her divorce.

Larysa's speech was very emotional. At the end she said she had decided to leave her job, "because her health is above everything."

"And when God closes one door, he opens the other. All will be well ", — she concluded.

In 2017, Larysa stood 8 administrative trials, had 11 police reports, over 20 offensive articles about her on the Internet, two detentions, and one prosecutor's warning.

Mahiliou journalist Alexander Burakou stressed that the authorities persecute only freelancers, who work with independent media.

He also mentioned the EU dialog with the Belarusian authorities and the uncertain future.

"There's an unsettling point now, as we do not know if we made the right choice many years ago", — said Alexander.

"I don't know of cases when the authorities would take journalists' children. But I know such incidents happened with civic activists. They do not need a court order, a decision by special commission is enough for that. ... Journalists can be found guilty of participating in a street action, and it is impossible to prove that they worked there as journalists. And when we report from some town, we can't mention the name of the town at least a day before the trip, we can't stay in hotels as they register your name." Volha said. "Sometimes in the court a policeman would say: "I personally do not know her, but I watch her for a year or so." 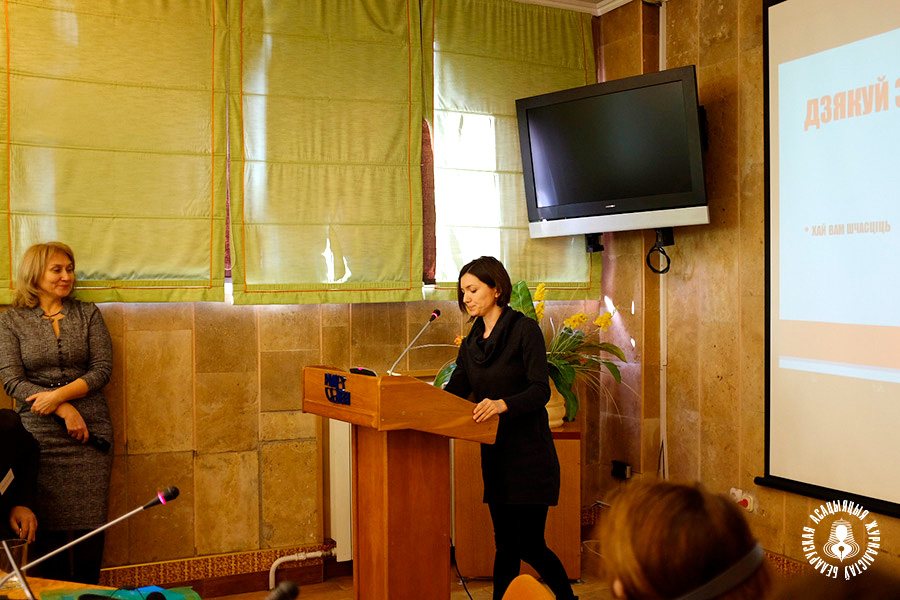 This year alone, freelance journalists in Belarus suffered interference from the authorities more than 180 times. Over 50 cases have resulted in large fines, and for some — in arrests. 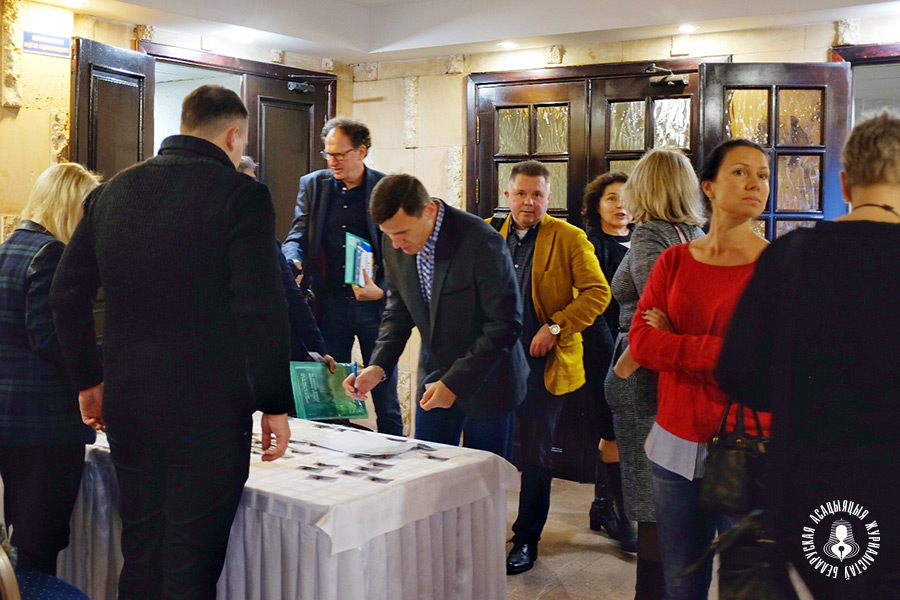 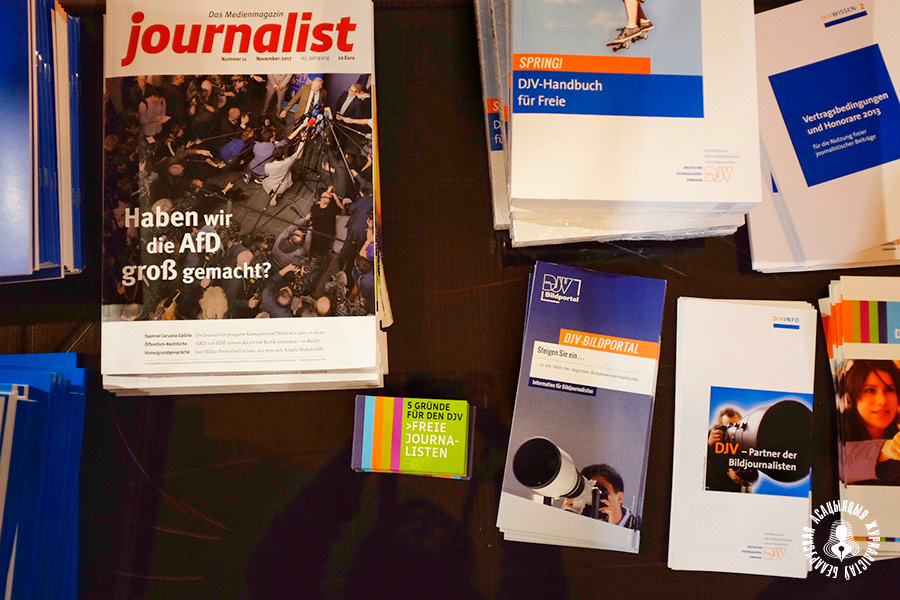 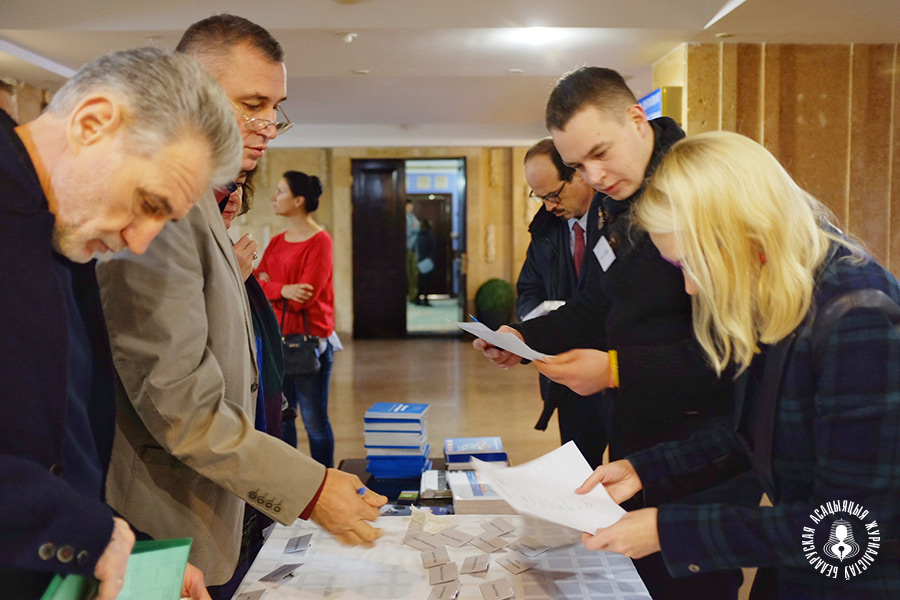 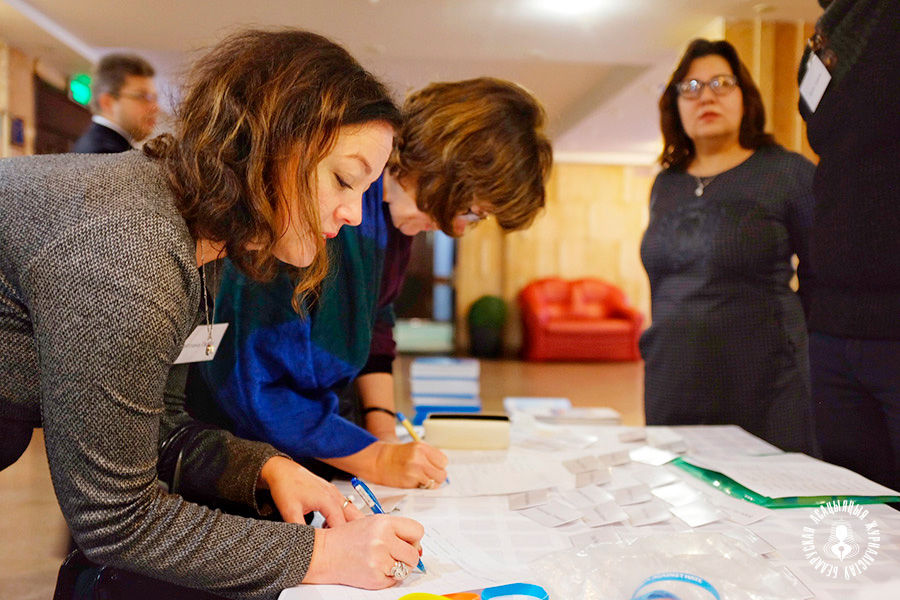 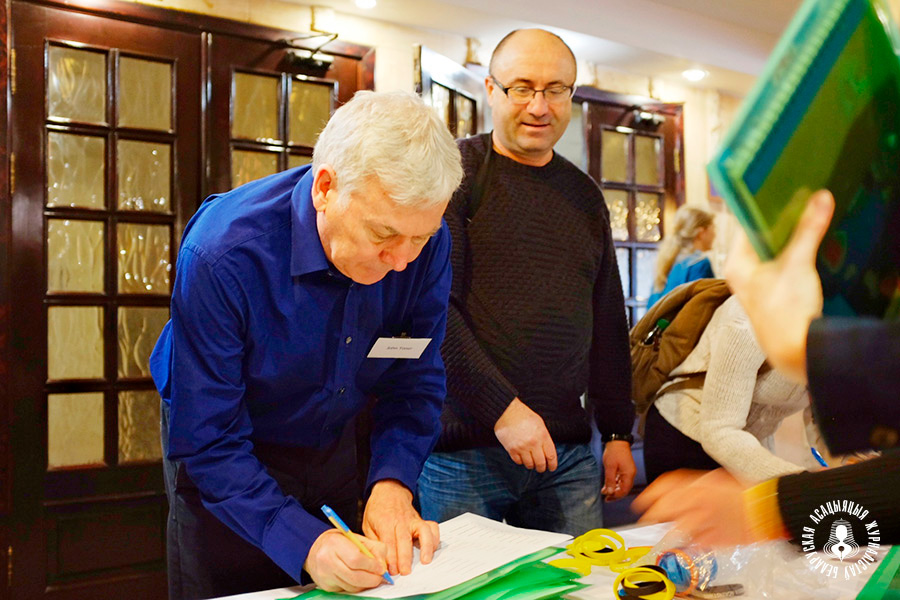 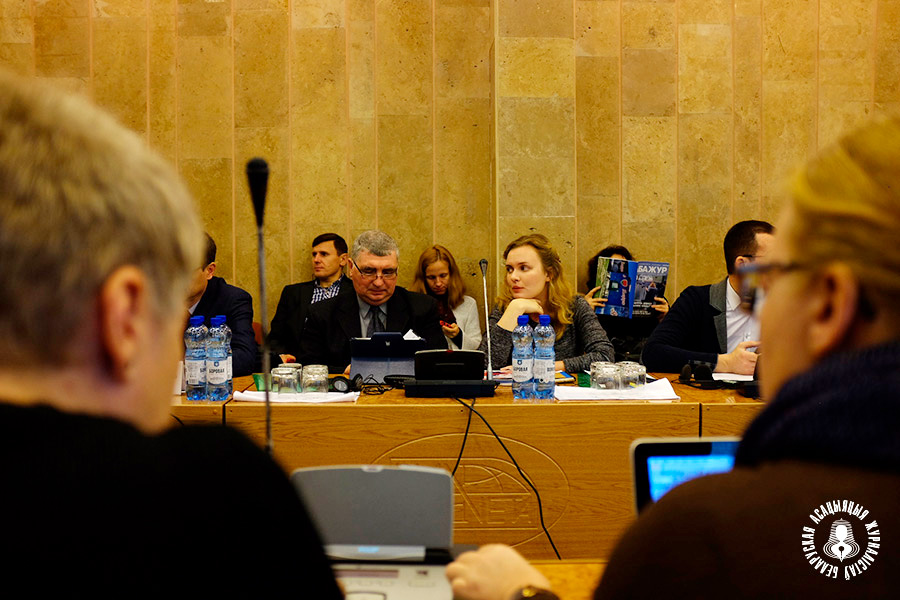