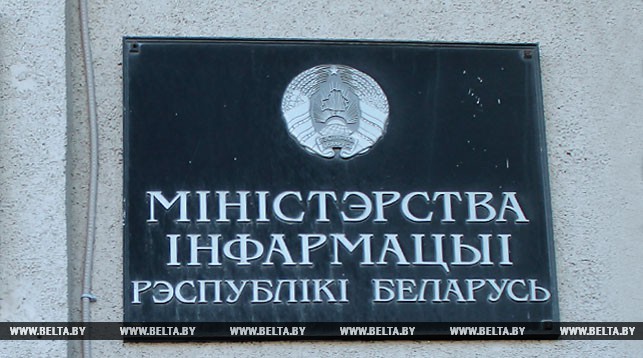 During the meeting, A. Bastunets drew the minister’s attention to the problems, which had been mentioned before. In particular, it was noted that the draft changes were aimed at reinforcing control over the Internet in Belarus. Also, special concern was expressed by the draft legal norms, planned to be included into the Code of Administrative Offenses. To be precise, the official authorities would like to introduce new sanctions in the format of fines, aimed at legal entities, i.e. editorials for distributing the information that is “banned for dissemination by other legislative acts”. A. Bastunets noted that such vague wording creates opportunities for the abuse of this norm.

Also, the BAJ Chairperson discussed with the Minister of Information the problem of imposed fines under article 22.9 of Belarus Code on Administrative Offenses.

Another emphasis during the meeting was put on the recent ordinance on increasing the presence of national programs on the state TV that should influence the country’s informational security.

“The major part of our talk was dedicated to the Internet. From my side, I noted that it was a positive decision to sever the Web-media from all other Web-resources. However, it will be possible to obtain the status of ‘Web-media’ through a complicated registration procedure. And just on the contrary, it is necessary to simplify the registration rules. I cited a thought, shared by Yury Zisser, the founder of TUT.BY Web-portal, which is the largest Web-resource in Belarus, that the requirement to identify the users would result in their fleeing to the Russian Web-sites, where such restrictions do not exist. Also, I passed our remarks, concerning the proposed amendments to the law ‘On Mass Media’, - noted Andrei Bastunets.

According to the BAJ Chairperson, the Minister of Information proposed to agree upon the format of further discussion of the above-mentioned amendments to the Mass Media law. Also, he promised to inform the MP Andrei Naumovich, who is the Head of the Standing Committee on Human Rights, National Relations, and Mass Media, that the draft amendments were expected to be received for revision by experts at the Office of OSCE Representative on Freedom of the Media.