11.01.2016 Source: Press service of BAJ Story: Article 23.5 of the Code of Administrative Violations 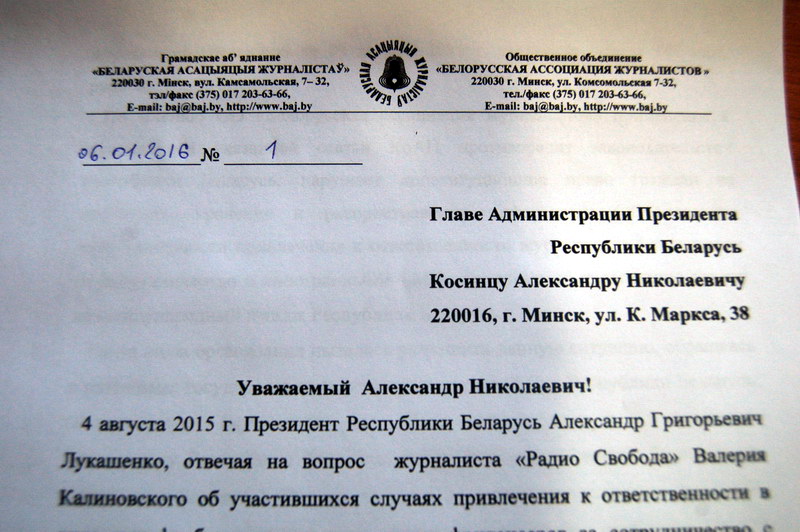 The letter was sent on January 6 to the head of the Administration Aliaksandr Kasinets.

Aliaksandr Lukashenka, replying to the issue raised by the ‘Radio Liberty’ journalist Valery Kalinouski at a press conference on August 4, 2015, said: “I think that it’s nonsense… It is not my principle to ban something. I will look into this problem. As for the fines, we will examine the problem, too. These are not rich people, and I understand it. I promise you that I will consider this issue. It is not because we meet. It is because you apparently have the point here. We will address this problem.”

After that, no new cases according to article 22.9 appeared, and this fact was assessed positively, in particular, by the European Federation of Journalists.

However, at the end of December 2015, three cases at once were launched against Belarusian journalists in the Homel region.

On December 24, Larysa Shchyrakova was called to the police department to receive a police report for violating article 22.9 of Belarus Code on Administrative Offenses, and a similar summons was given to her colleague Kastus Zhukouski on December 28.

We consider resumption of this practice unacceptable and damaging the reputation of the state and the head of state.

Having in mind the issue raised and the statement of Aliaksandr Lukashenka, the Belarusian Association of Journalists:

BAJ lawyers and international community think that such persecution violates the citizens’ rights to receive and impart information and their freedom of expression, guaranteed by Belarusian Constitution.