Amendments to Internet Control Prepared Secretly from the Public

On April 21, in the annual speech addressed to the Belarusian people, Aliaksandr Lukashenko told that the Ministry of Information had been charged with a task to draft a new law to control the Internet.

“We want the Internet to be controlled by some international organization according to certain rules. If this is not the case, then every state will defend its own national interests independently. Now Ananich and the others are dealing with this issue. They are to place the legislative initiatives on my table,” said Aliaksandr Lukashnka.

The next day, the Belarusian Association of Journalists filed a request to the Ministry of Information asking to reveal what the legislative initiatives were about, and what norms regulating the national segment of the Internet had to be amended.

On May 16, the Ministry of Information sent their reply. The reply was not actually a reply up to the point; the Minister answered that BAJ’s request “had been taken into account”. 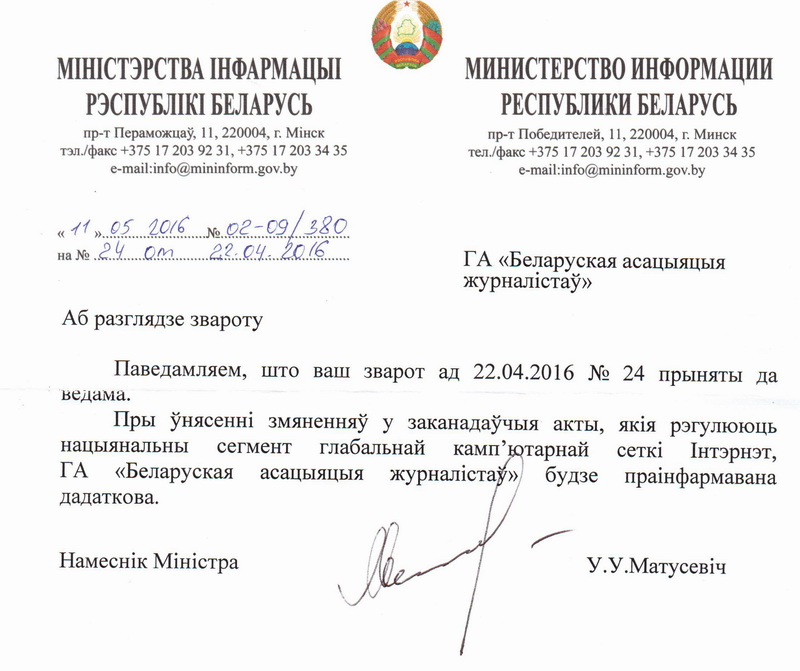 Andrei Bastunets, chairperson of BAJ and lawyer, says that the reaction not simply violates the law (concerning citizen petitioning to public bodies), but also reminds the situation around amendments that were introduced to the Law on Mass Media at the end of 2014.

“In 2014, BAJ also sent several requests to state bodies asking about the amendments being developed. At that time, we had the reply from the Ministry of Information that in case such amendments were prepared, the journalist community would be invited for public discussion of the draft.

But the promise was not fulfilled, and the amendments were made public on the day they were approved by the Parliament. The present situation reminds of that of 2014, it shows that Belarusian Ministries do not reply specifically to questions posed in citizen petitions.  We won’t leave the situation as such, we will lodge appeals,” said the chairperson of BAJ.