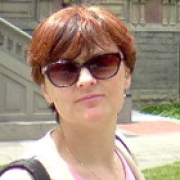 When I am asked to present myself, I usually emphasize a few points. Firstly, I firmly decided to be a journalist when I was 13. So, it is not surprising that in 1992, I graduated from the Department of Journalism of the Belarusian State University. Then, for a certain period, I have been very interested in understanding the ideas of feminism and promoting them in Belarus. “The Women’s Newspaper,” which several my friends and I launched in 1992 and published until 1996, and a kandidatskaya dissertation on the topic of women’s international magazines, which I wrote in 2001, helped to satisfy this interest. Finally, my current activity is multidimensional: I work on a new on-line journal “Post-Soviet Post,” study Soviet history of Russian journalism and political communication in Belarus after 1990, and read a lot in an attempt to satisfy my life-long passion for self-education.