It's been a week since the start of the trial against chief editor of Tut.by Maryna Zolatova. For five days, the court has ben questionning witnesses and representatives of the injured parties. 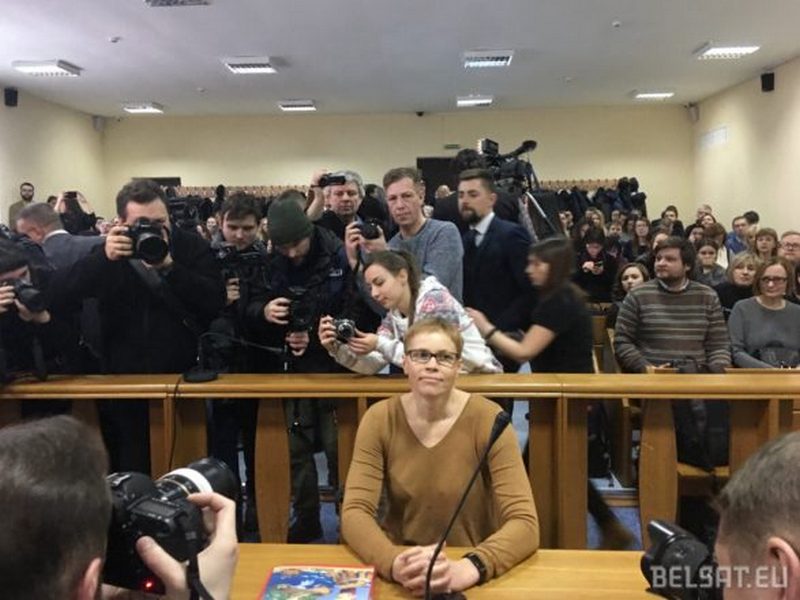 Maryna Zolatava is charged under Part 2 Article 425 of the Criminal Code (omission by an official), the penalty established by the article is a fine or up to 5 years in prison.

Witnesses in the case are Tut.by journalists, who were previously charged under the criminal "BelTA case".  The interests of the injured parties were represented by lawyers of BelTA and Belarus Segodnya publishing house.

The witnesses do not deny having used the passwords for BelTA's paid subscription that belonged to other publications. BelTA case defendants (editors and journalists) have paid large amounts of compensation when the criminal cases were requalified as the administrative cases.

TUT.BY Media General Director Lyudmila Chekina told the court that the Company did not approve of the actions of employees.

" This is not right. We believe that the staff did a wrong thing. We have repaired the damage claimed from TUT.BY Media and issued loans to all staff involved in the case to pay the damages" - said Chekina.

The journalists who were detained Aug. 7, 2018, state in court that the investigators demanded that they testify against Zolatava.

- August 7, before the questioning by the Investigative Committee, they told me to testify that Zolotova had given instructions to use BelTA's paid subscription. In response, I wrote a statement that I had never received such instructions from Zolatava. This is really true, my statement is included in the materials of the case - told the court Tut.by editor Hanna Kaltyhina.

Tut.by Editor Halina Ulasik testified that after the search the investigators who questioned her on August 7, wanted her to give evidence against the top management of the portal.

- On August 7 they detained me after the search and took me in for questioning as a witness. During the interrogation, the investigator told me that I should state that I entered BelTA password "on direct orders and under the passive eye of the management". When I refused to say so, I was told that I did not wish to engage with the investigation, and I was no longer a witness but a suspect and they detained me. Then they sent me to the detention center, - told the court Halina Ulasik about her questioning at the Investigative Committee.

Tut.by Editor Ulyana Babayed said that she had used BelTA password when she worked at BelKP-PRESS. When she joined Tut.by she continued to use the same password.

Babayed was brought to administrative responsibility for 19 news pieces that she read as a BelTA subscriber.

"I paid 8580 rubles (about $4,000) for reading 19 news pieces by BelTA during 18 months. Although BelTA has no subscription services for individuals, I was given the bill personally. In fact, one news piece cost me 451 rubles," -- said Ulyana Babayed in court.

Ulyana said , that the news that she had read as a subscriber  had long been in the public domain on the BelTA website. Babayed gave exact dates and times of the news publishing in teh public domain, which according to the investigation, she read later as a subscriber.

Babayed told the court about certain pressure on her by the Investigative Committee on August 7.

"The head of the investigative group yelled at me and demanded evidence against Zolatava. My lawyer was not allowed into the building and they did not warn me about my right not to testify,"- said Babayed.

- This [interrogations] lasted four months and was disproportionate to the offence, - she said in court.

Editor Uladzislau Kuletski told the court that some of the information in the minutes of his interrogation during the preliminary investigation was not true.

- The investigators said that they would just not accept any other testimony from me. Some parts of the testimony were imposed by the investigators. They were very interested in Zolatava and Kaltyhina, everything was about them. I was told that if I did not sign such testimony, they would make my staff accountable, - said Kuletski.

All 58 volumes of the criminal case have already been read  by the court.

BelTA representatives stated that Zolatave and other persons involved in the case had already paid the damages. The bills had been filed in accordance with the subscription fees for each particular month.

BelTA also asked to collect 6,000 rubles from Zolatava as a payment for BelTA lawyers services.

BAJ chairman Andrei Bastunets sums up the first week of the trial: Neither BelTA, nor BelTA customers took any measures to protect the passwords of paid subscription, they could be used by almost anyone. That might be because the subscription did not have a big added value, as all the articles were open for public access on the BelTA website in just a few minutes.

Afterall, I should remind you that Zolatava is charged with omission by an official. However, the discussion in court revolves around other things all the time. Those that seemed to have been closed and dropped. Former defendants pleaded guilty to using passwords under the pressure of the investigation (which becomes evident in court) and paid incredibly inflated damages. However, the court keeps addressing the issue, although Zolatava is charged under an entirely different article of the Criminal Code.

The only positive result of this trial is that we have got an opportunity to see and hear about the work of both the investigation committee, and the state-owned media.

Maryna Zolatava is the only defendant in the BelTA case; the other defendants - 14 employees of various media outlets - were released from criminal liability but charged with an administrative infringement.  In addition to fines, the journalists were obliged to cover the damages. The amounts vary from 3, 000 to 17, 000 BYN (about $1,500 -- 8, 500).

Maryna Zolatava is charged under Part 2 Article 425 of the Criminal Code (omission by an official), the penalty established by the article is a fine or up to 5 years in prison.

Initially she was also a suspect under Part 2 Article 349 (Unauthorized access to computer information) of the Criminal Code. The other journalists were charged under this very article.  According to the investigation committee, of all the suspects, Zolatava is the only one who did not access the paid paid subscription materials. Criminal charges of unauthorized access against Maryna Zolatava have been dropped "due to non-existence of a crime."

Belarus. The quantitative media results of the year 2018