On August 27, according to the decision of the Supreme Court, BAJ representative "misunderstood the law", and all their arguments as to no legal grounds to sustain the liquidation claim should be considered unimportant. 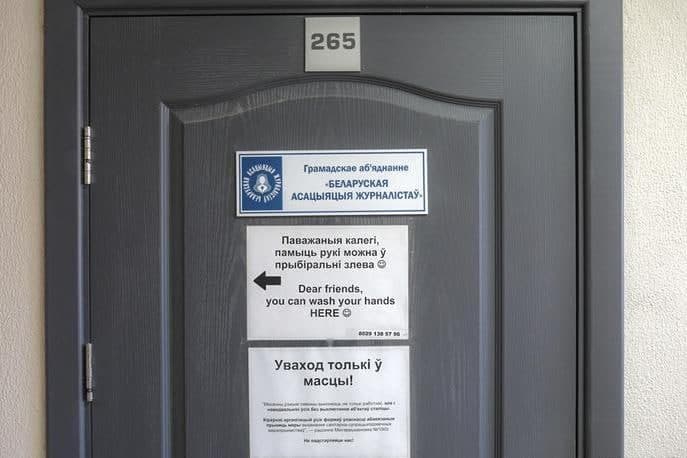 Independent media organizations and journalists in Belarus have faced unprecedented repression from the state since the 2020 presidential election. The Belarusian Association of Journalists (BAJ) has documented more than 500 detentions, hundreds of arrests and fines, and dozens of criminal cases and prison sentences directed against reporters, editors and media managers. Almost every independent news and socio-political outlet from the local to the national level has experienced police pressure, searches and confiscations of their professional equipment. Many have been forced to stop publishing or to flee the country in order to work from exile.

In July 2021, the state launched a new wave of repression against independent media outlets and organizations. Over ten days, security forces carried out more than 70 searches of editorial offices and private homes of employees of national and regional media. As a result, dozens more journalists, editors and media managers joined their colleagues already in custody.

Simultaneously, the Belarusian authorities began the process of liquidating the Belarusian Association of Journalists, one of Belarus’s leading NGOs. BAJ is a voluntary, nongovernmental, nonpartisan association that includes more than 1,300 media professionals from across the country. BAJ assists its members in realizing and developing their professional journalistic activities. Throughout its 25 years of its existence, BAJ has also be a leader in promoting freedom of expression and defending media rights.

The Belarusian Association of Journalists has been internationally recognized for its work. In 2004, the European Parliament awarded BAJ with the Sakharov Prize for Freedom of Thought, the EU’s highest human rights tribute. In 2011, BAJ received the Atlantic Council’s Freedom Award. In 2020, BAJ was the first recipient of the Canada-U.K. Media Freedom Award, which recognizes individuals and organizations advocating for media freedom.

Over the past year, BAJ has focused on defending and assisting its members whose professional and human rights have been violated by the state’s searches, detentions, beatings, legal and criminal persecution, arrests and prison terms. So it is not surprising that the authorities have launched a repressive campaign targeting BAJ itself.

On June 9, the Ministry of Justice launched a major audit of BAJ’s activities. On June 21, BAJ received an official request that required the organization to provide thousands of administrative and financial documents on its activities, including lists of its members, covering the last three years, on that same day of June 21. The Ministry of Justice later extended the deadline to July 1. Despite the short time frame, BAJ submitted all the requested documents, with the exception of those seized from the BAJ office during a search by security forces in February 2021. 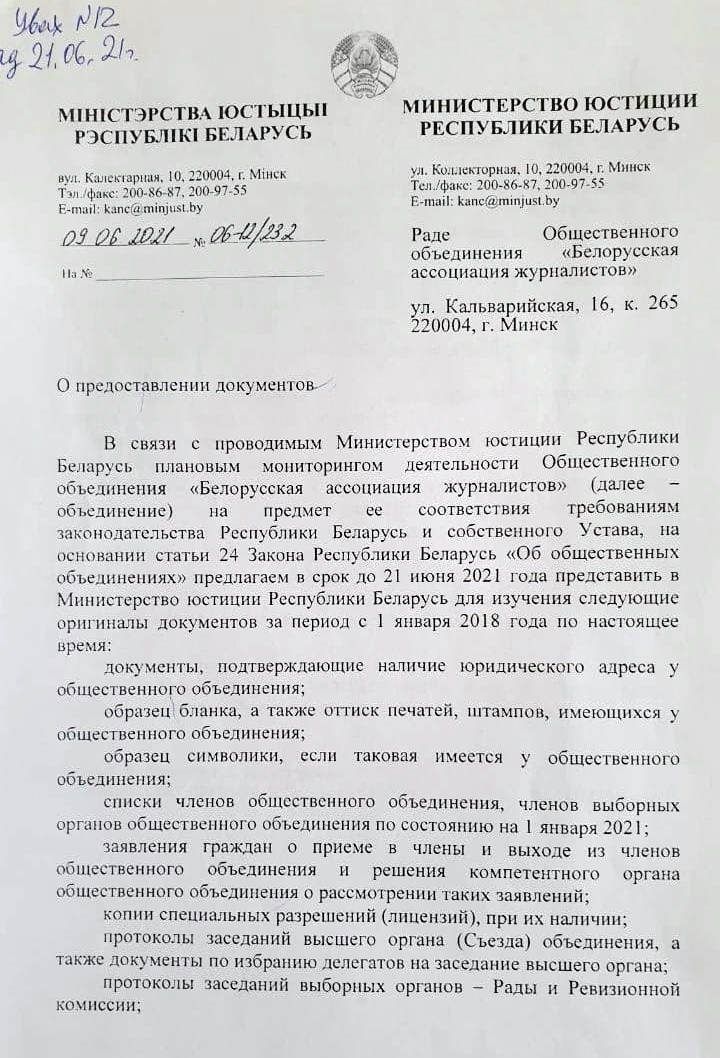 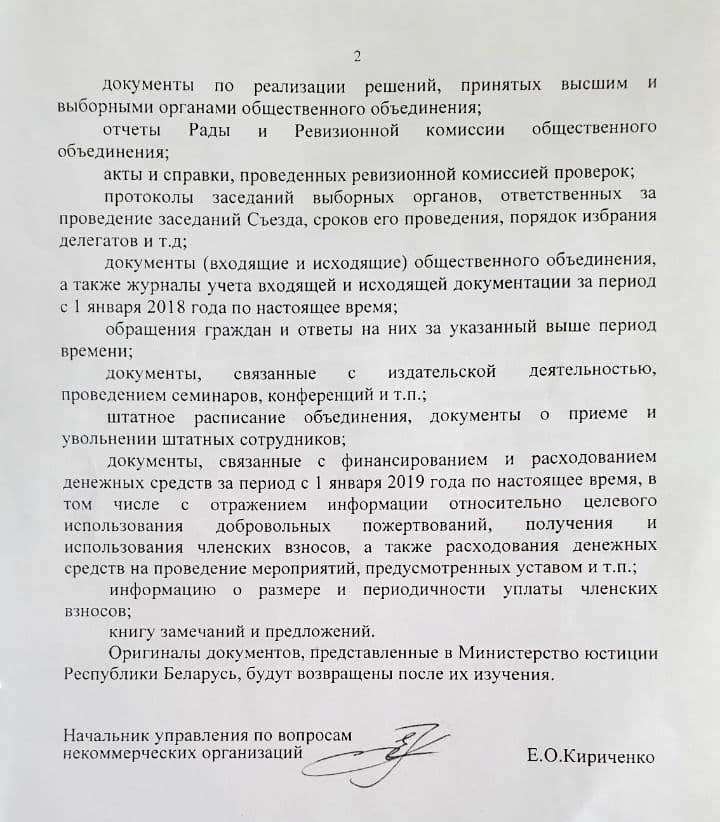 On July 14, in the absence of BAJ representatives, security forces raided, searched and sealed BAJ’s office. The next day, on July 15, BAJ received an official warning from the Ministry of Justice on the grounds that its regional branches in Brest and Maladzechna had allegedly carried out their activities without having legal addresses. However, this is not true. Nevertheless, the Ministry of Justice considered the failure of BAJ to submit all of the required audit documents, as well as the absence of legal addresses of the regional branches, to be a violation of the country’s legislation and BAJ’s charter. The Ministry demanded that the alleged violations be rectified by the next day. 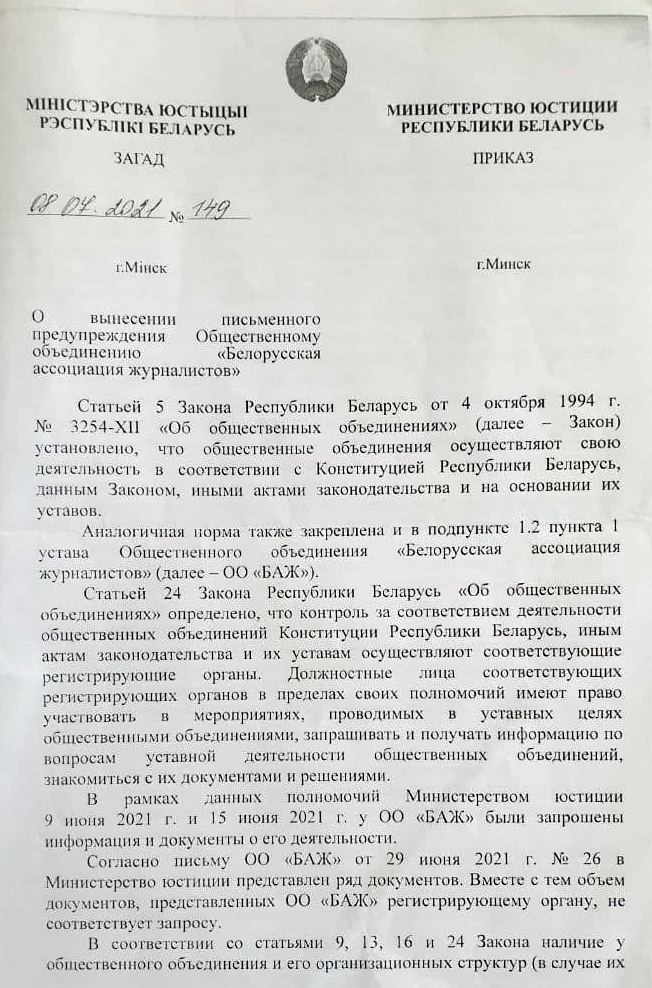 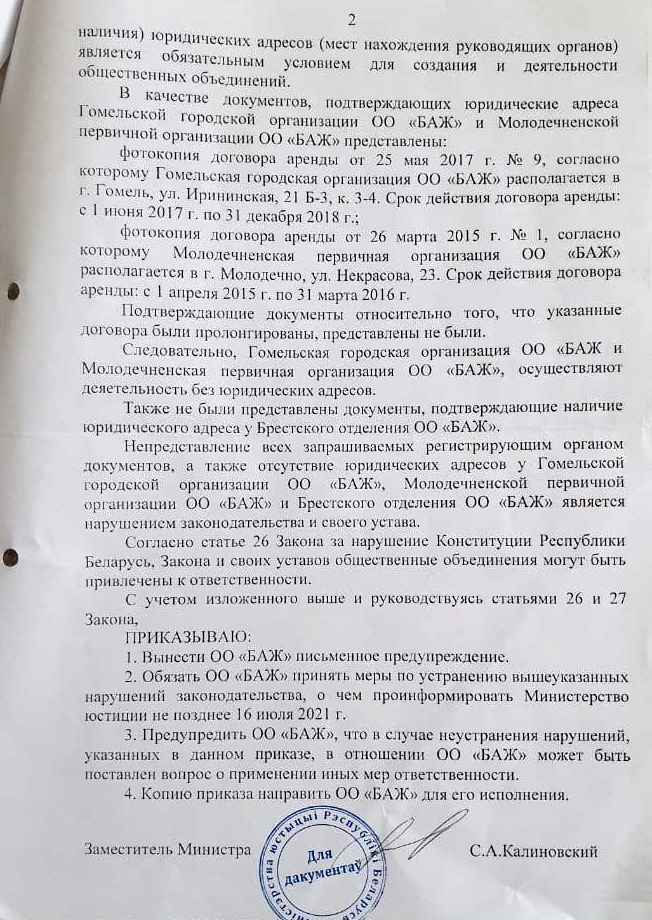 On July 16, BAJ informed the Ministry of Justice that the organization’s office had been sealed by the state and that its representatives had no access to its documents. BAJ therefore requested more time to fulfill the Ministry’s demands after gaining access to its premises. 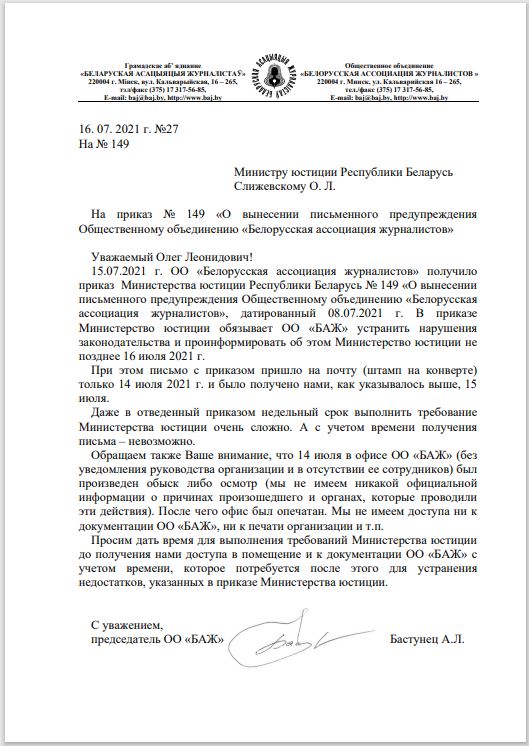 Nevertheless, on July 21, the Ministry of Justice reported via its social networks that it had already submitted a claim for the liquidation of BAJ to the Supreme Court, allegedly due to the organization’s failure to rectify the violations and the official warning for repeated violations of the law.

As of the date of this statement, BAJ has not received any further written communication or decision from either the Ministry of Justice or the Supreme Court.

Despite the state’s unjust persecution, the Belarusian Association of Journalists continues to serve its members and fulfil its mission.

On July 30, BAJ received a letter from the Supreme Court with the date of the preliminary hearing on the liquidation of BAJ.

The Ministry of Justice filed the case to liquidate the Belarusian Association of Journalists. The preliminary session open for public is scheduled for 11:00 on August 11 in the Supreme Court (Minsk, Arlouskaya str., 76, entrance 1).

The documents on the civil claim were signed by the judge of the Supreme Court Inesa Lazavikova. The formal reason for the liquidation is  BAJ “failure to correct the violations revealed by the Ministry of Justice during the inspection, which began in June 2021”.  BAJ leadership categorically disagree with that. 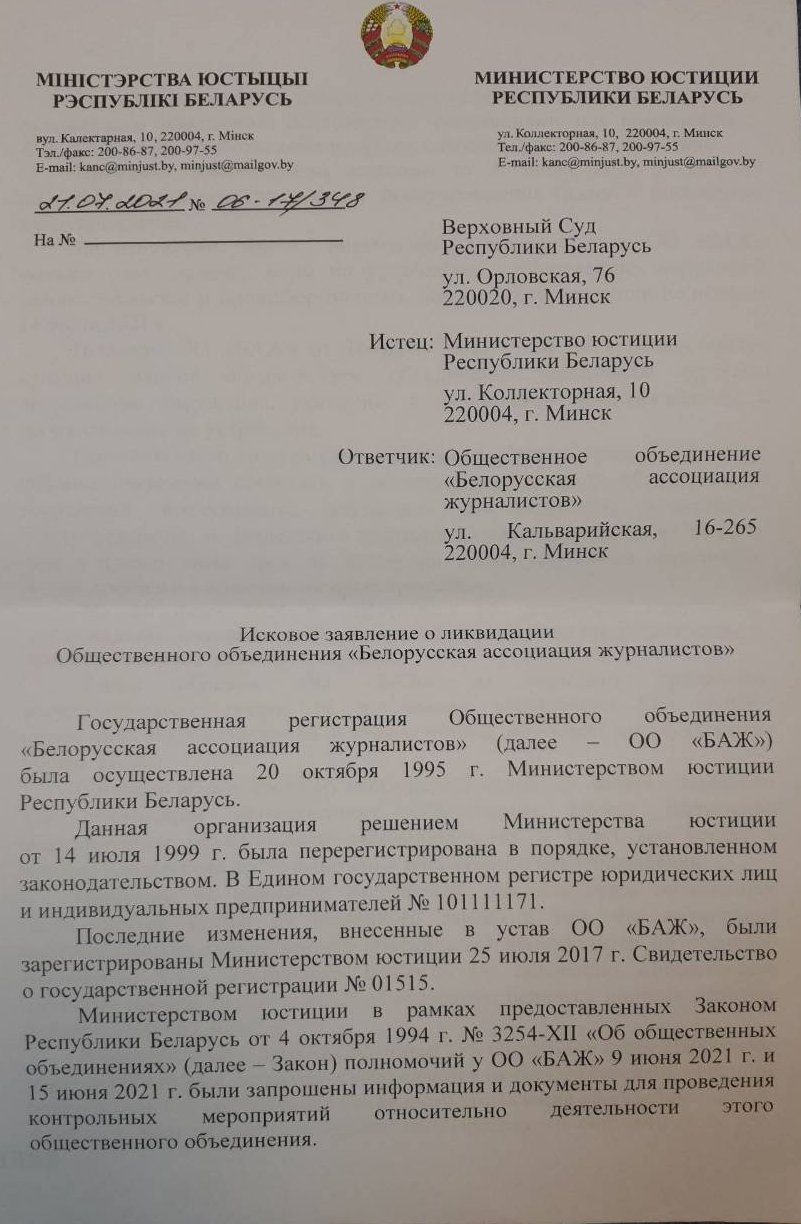 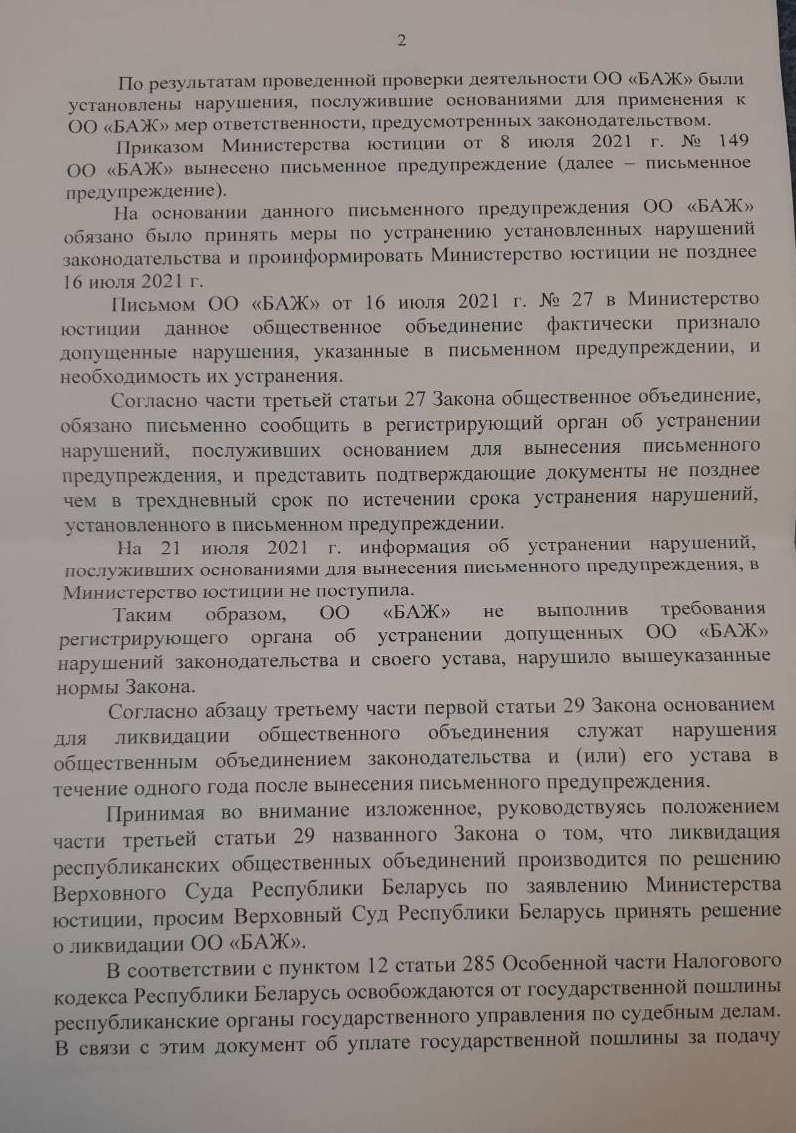 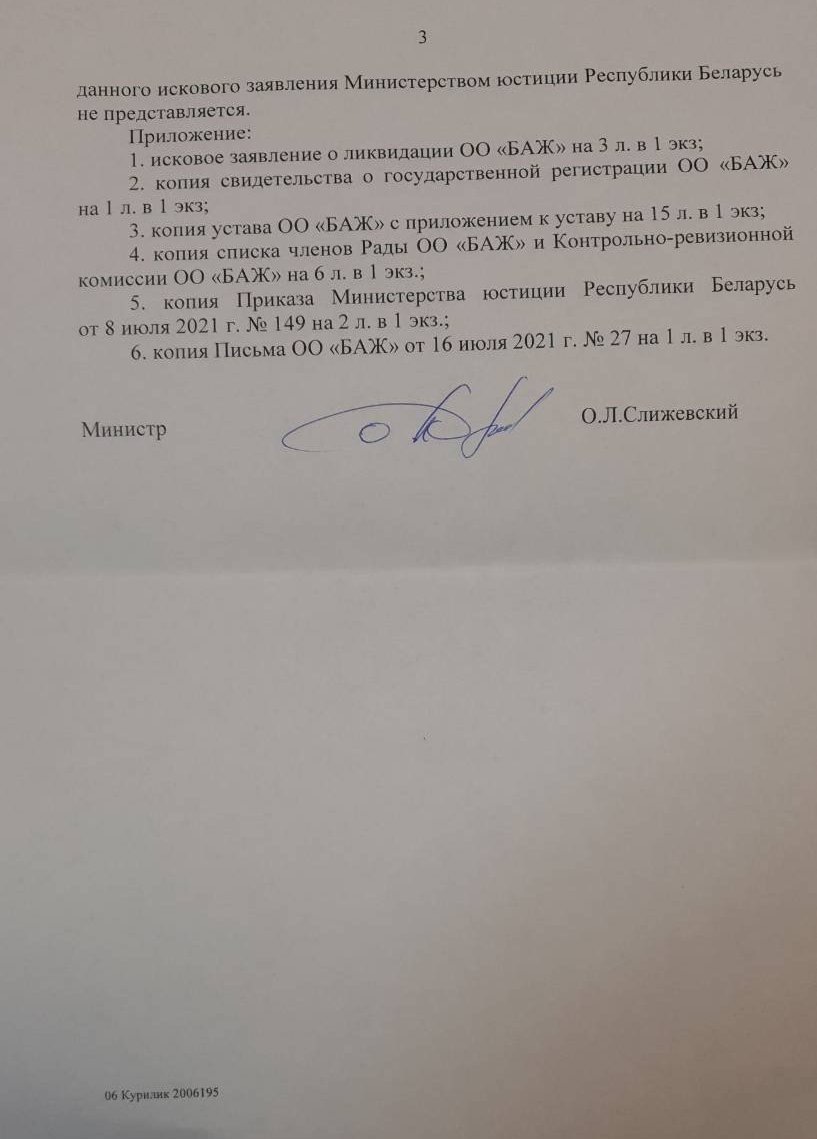 On August 23, the Supreme Court of Belarus considered the appeal of the Belarusian Association of Journalists (BAJ) against the warning issued by the Ministry of Justice following an inspection of the organization's records.

The warning pointed out that the office lease contracts of the organization's branches in Homel and Maladzechna had expired. BAJ firmly disagreed with this and presented arguments and evidence of its rightness in its appeal to the Supreme Court.

On August 23, Judge of the Supreme Court Valiantsina Kulik considered the appeal of the journalist organization and upheld the warning of the Ministry of Justice. BAJ intends to appeal the decision.

On August 27, according to the decision of the Supreme Court, BAJ representative "misunderstood the law", and all their arguments as to no legal grounds to sustain the liquidation claim should be considered unimportant. 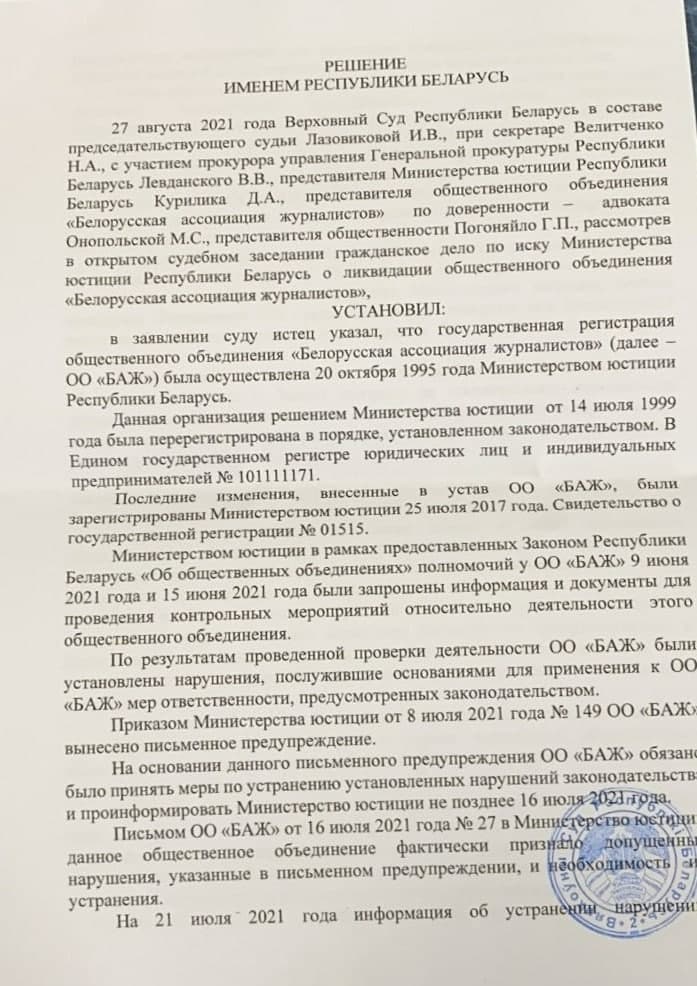 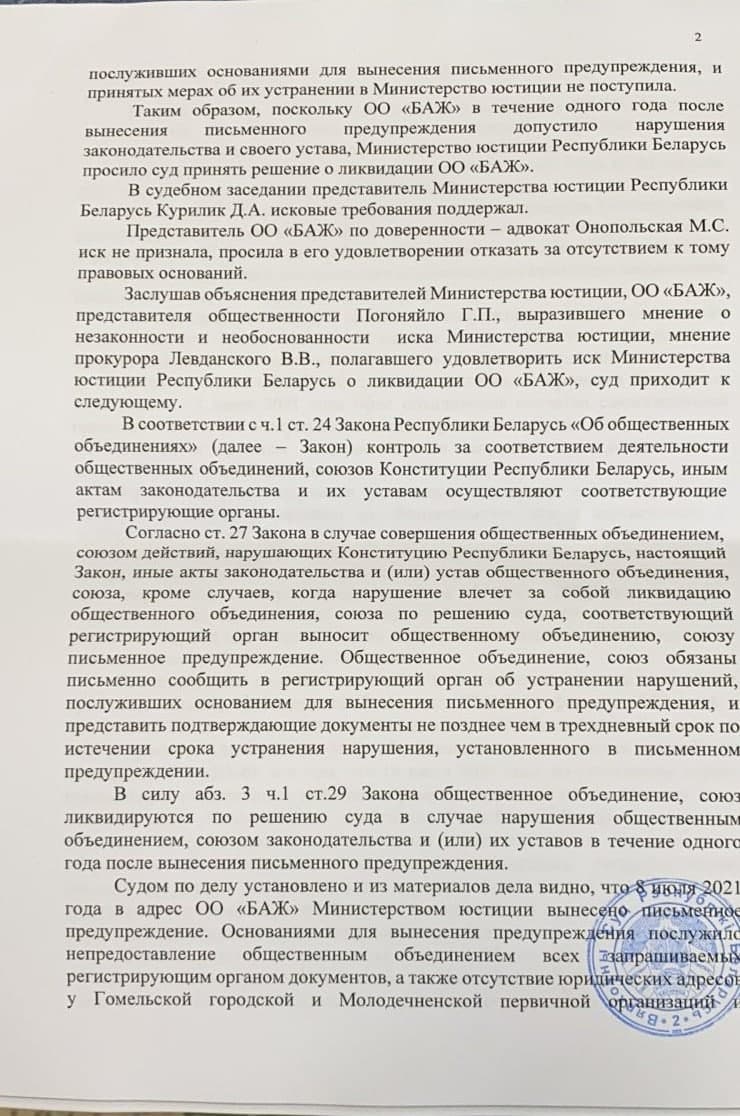 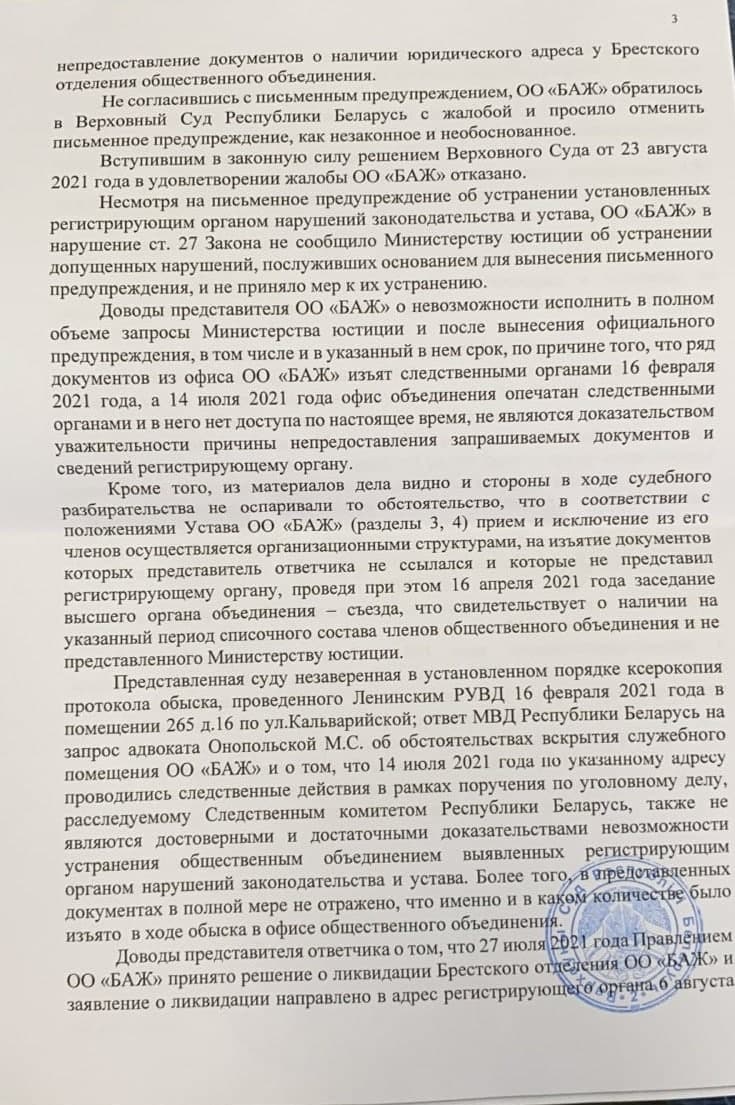 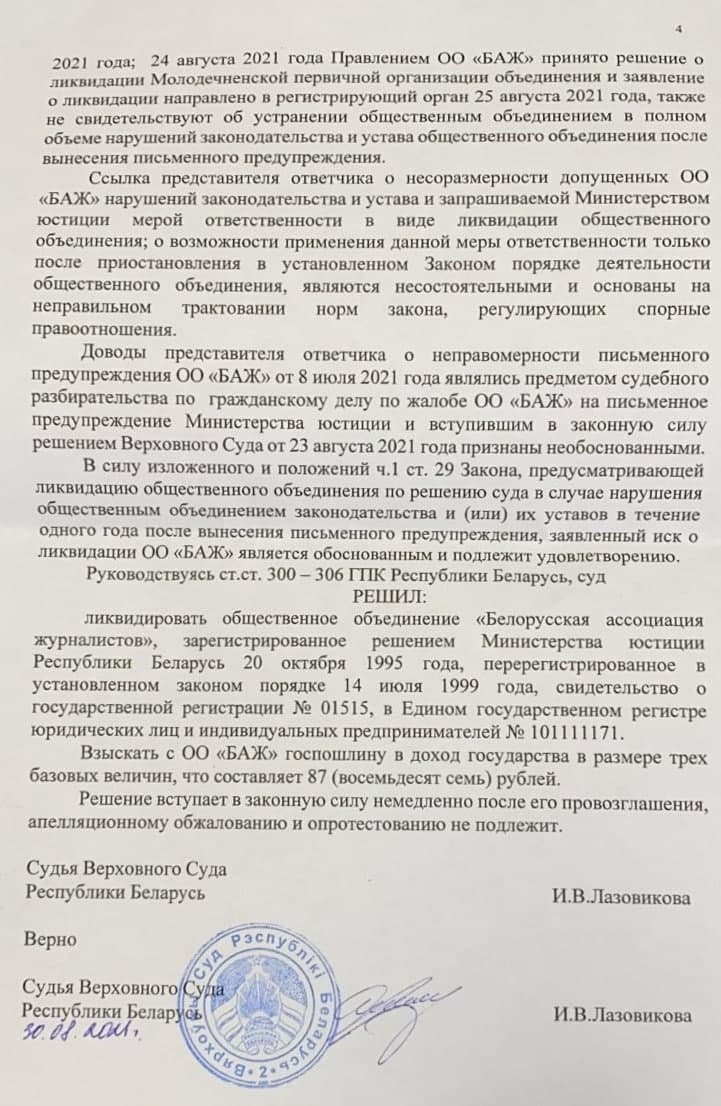 "BAJ is not a simple entry in the register of legal entities. It's almost 1500 members of the organization, united by the awareness of their mission: to expand the space of freedom of speech in Belarus. Sorry for the pathos and a quote from the BAJ Strategy.

These are friends and colleagues. It's about US, not the legal status and office. And WE will continue to do our work regardless of the decisions of courts and administrative bodies, by all legal means," said BAJ chairman Andrei Bastunets.

BAJ operates since the fall of 1995. It unites more than 1,300 media workers. BAJ is an influential organization recognized by the international professional community.