Situation in The Sphere of Mass Media in 2020 (OVERVIEW) 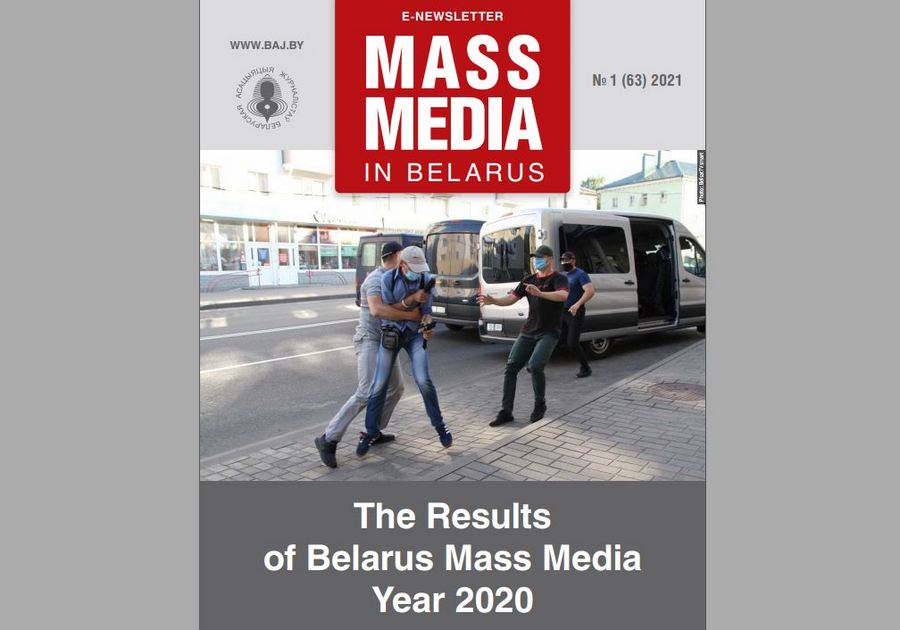 The year of 2020 appeared to be the most complicated for the Belarusian media for the whole period of conducted monitoring of situation in the mass media field. The number of attacks on journalists, bloggers, and mass media dramatically increased. The Belarusian authorities tried to counteract to the dissemination of information about COVID-19 in the country as well as about the political and legal crises, connected with the presidential election.

Belarus appeared among those few European countries, where the lockdown in connection with COVID-19 pandemic wasn’t announced at all. Moreover, the officials kept denying the seriousness of this disease for a long period of time. Thus, the president Aliaksandr Lukashenka called the pandemic a ‘psychosis’ and an ‘infodemic’. Moreover, he called upon the Ministry of Information and the law-enforcement agencies to struggle with the ‘hype’ on the corona issue. The Ministry of Health Care failed to provide the journalists and the society with up-to-date and truthful information about the real situation with COVID-19 in the country.

More information about the influence of COVID-19 pandemic on the activity of Belarusian journalists and mass media can be found under the link.

The overwhelming majority of attacks on journalists and mass media in 2020 was connected with their coverage of presidential election in August 2020 and the following mass protest actions. In 95% of cases the representatives of governmental authorities (the law-enforcement agents, the officials etc.) acted as aggressors during the mass protest actions. Arbitrary detentions were the most wide-spread kind of violations of journalist rights in 2020. The Belarusian Association of Journalists registered 481 detentions within the year’s course that exceeded twice the number of detentions in the preceding 6 years, taken together. The previous ‘peak’ year took place after the election in 2011, when journalists were detained 167 times. Nearly the same number of journalists was arbitrarily detained during August 2020 only. 160 journalists were taken to custody then.

The arbitrary detentions of journalists were often accompanied with destruction or seizure of professional technical equipment, deletion of recorded materials, and violence. 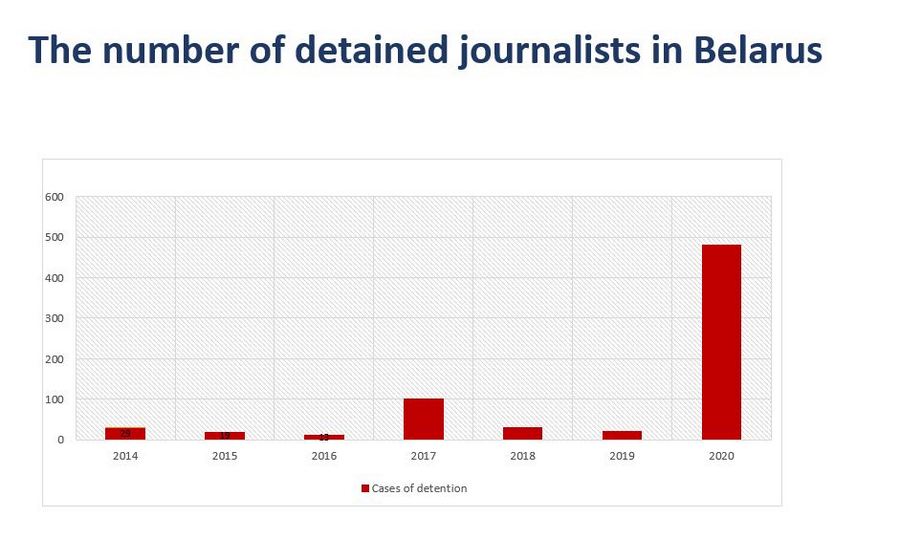 There were registered three cases of application of guns against female journalists during their coverage of protest actions in Minsk. Consequently, all of them were wounded.

Thus, a ‘Nasha Niva’ journalist Natalia Lubneuskaya was shot in her knee with a rubber bullet by one of law-enforcement agents while reporting the protest events on August 10, 2020. The aggressor stood in 10 meters from the group of journalists in the ‘PRESS’ vests. The reporter had to spend more than a month in hospital, while the wounded knee was cured.

The number of criminal cases, which were filed against journalists and media specialists, increased in 2020. 15 media representatives were prosecuted on the alleged criminal charges within the year. Nine of them remained behind bars at the beginning of 2021. The largest public response was caused by criminal cases against ‘Belsat’ TV journalists Katsiaryna Andreyeva and Darya Chultsova, who streamed from a mass protest action in Minsk. They were charged with ‘arrangement of mass protest actions’. The similarly broad response was caused by the criminal prosecution against a TUT.BY journalist Katsiaryna Barysevich allegedly ‘for divulging a medical secret’. The reporter distributed the information provided by a doctor that there was no alcohol in the blood of the deceased protester, contrary to the assurances of the official authorities.

Another criminal case was filed against the ‘Press-club’ media managers and journalists as well as Kseniya Lutskina, a former reporter of Belarusian State TV and Radio Company, who cooperated with them, at the end of the year. (Kseniya Lutskina had resigned from the state-owned media outlet after the rigged presidential election.) The detained media managers and journalists were preliminary charged with tax violations.

It is noteworthy that the official authorities applied systematic pressure with all kinds of repressive measures in all media-related areas within the reporting period.

Apart from the mentioned above measures, they were as follows:

- disabling of public access to the Internet in Belarus in the early days after the presidential election and permanent restrictions of the mobile Internet connection during the mass protest actions;

- restriction of access to the Web-sites that provided the unbiased coverage of political situation in the country;

- deprivation of the largest Belarusian Web-portal TUT.BY of its official mass media status;

- pressure on popular Telegram- and YouTube-channels as well as local chats, including initiation of criminal cases, prosecution of their administrators, and presentation of their content as ‘extremist materials’;

- counteraction to printing and distribution of several non-state newspapers that led to the suspension of their publishing;

- dismissals and prosecution of state media journalists, who opposed the dissemination of propagandist fake news.

More details about the pressure on mass media during the presidential election and afterwards can be found under the link: