Russia is shooting the truth about the invasion of Ukraine: losses among journalists in 20 days of war

In less than three weeks since the beginning of the full-scale Russian invasion of our country, there are already Ukrainian and international journalists killed and injured in Ukraine. 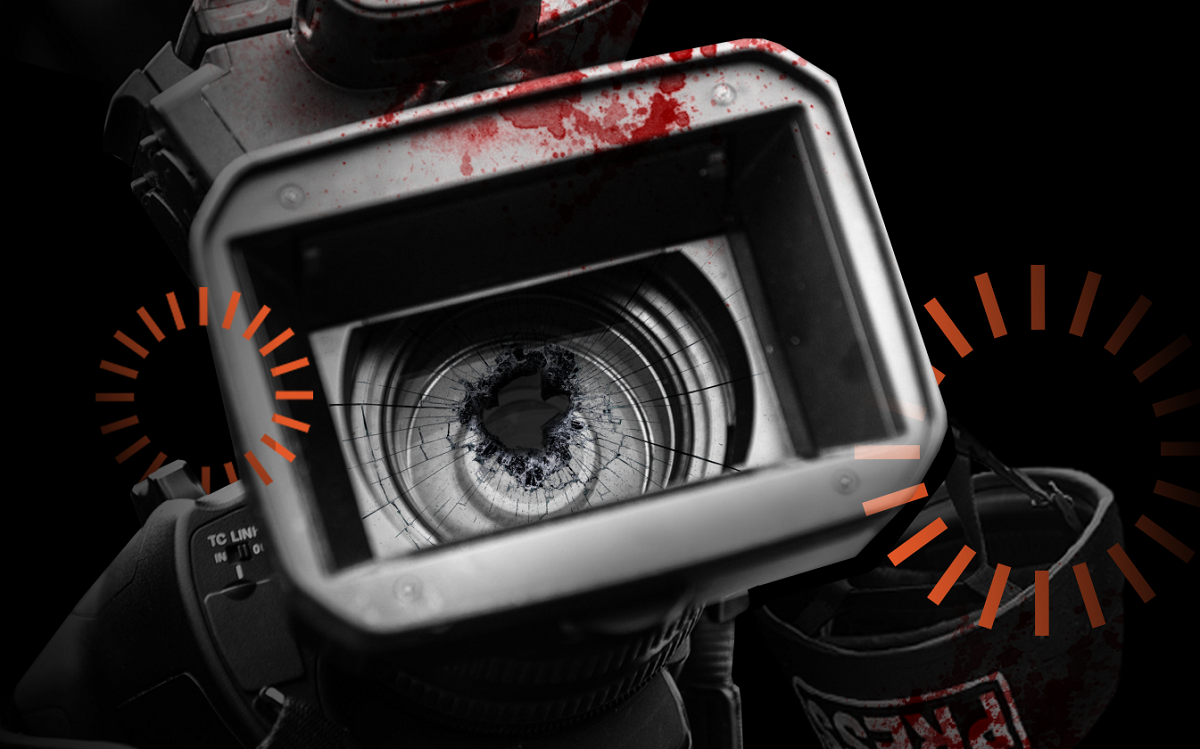 On March 13 in Irpin, the Russian military shot American reporter, documentary filmmaker Brent Renaud. Renaud together with American photographer Juan Arredondo that day were filming the evacuation of people from Irpin across the destroyed bridge. Journalists decided to go deep into the city, near Romaniv bridge the driver of green “Lada” offered to drive them — they agreed. In Irpin, Renaud and Arredondo were asked to stop near the “Yesenin” residential complex which was completely destroyed by Russian shelling, to film it. At that moment, two Russian servicemen appeared nearby. They fired warning shots, after which the driver of the car reacted and started running away with the journalists. Then the Russians opened fire on the defeat. Renaud was wounded in the neck and died on the spot. In Ukraine, he worked on a project on the global refugee crisis for Time Studios, the film and television division of the company.

“We are shocked and saddened by the news of the death of American journalist Brent Renaud in Ukraine. Such attacks are completely unacceptable and are a violation of international law, — Carlos Martinez de la Serna, program director of the Committee to Protect Journalists noticed. — Russian troops in Ukraine must immediately stop all violence against journalists and other civilians, and the one who killed Renaud must be brought to justice”.

In the evening of the same day, the mayor of Irpin Oleksandr Markushyn announced that the Ukrainian military will no longer allow journalists into the city: “As of today, we ban journalists from entering Irpin. In this way, we want to save the lives of both them and our defenders”.

Brent Renaud has repeatedly covered hotspots in Iraq, Afghanistan, Egypt and Libya, as well as the refugee crisis in Africa. Brent has received numerous international awards for his collaboration with brother, Craige Renaud, on documentaries, including Peabody, the Columbia DuPont Awards, and the Overseas Press Club Award.

TV channel Fox News cameraman Pierre Zakrzewski, the Irishman, and Oleksandra Kuvshinova, a Ukrainian journalist, were killed on March 14 in the village of Gorenka, Kyiv oblast. The car in which they were traveling with the British correspondent of the TV channel Benjamin Hall came under artillery fire from Russian troops.

“Pierre was a military photographer in the war zone who covered for Fox News almost all international news from Iraq to Afghanistan and Syria during his long work here», – Fox News Media CEO Suzanne Scott noticed.

In addition, not in the line of duty, but at the hands of the Russian military three more Ukrainian journalists were killed. Dilerbek Shakirov, a journalist with the information weekly “Around You”, died on February 26 in the village of Zelenivka, Kherson oblast. The Prosecutor General of Ukraine Iryna Venediktova reported that the man was shot from the car from the automatic weapon by Russian military. On March 1, during a rocket attack by Russian troops on a TV tower in Kyiv, the operator of the Live TV channel Yevhen Sakun, who was passing by it at that time, was killed. On March 6 in fight near Mykolaiv, the Ukrainian military journalist Victor Dudar, who was then a part of Armed forces of Ukraine, was killed. 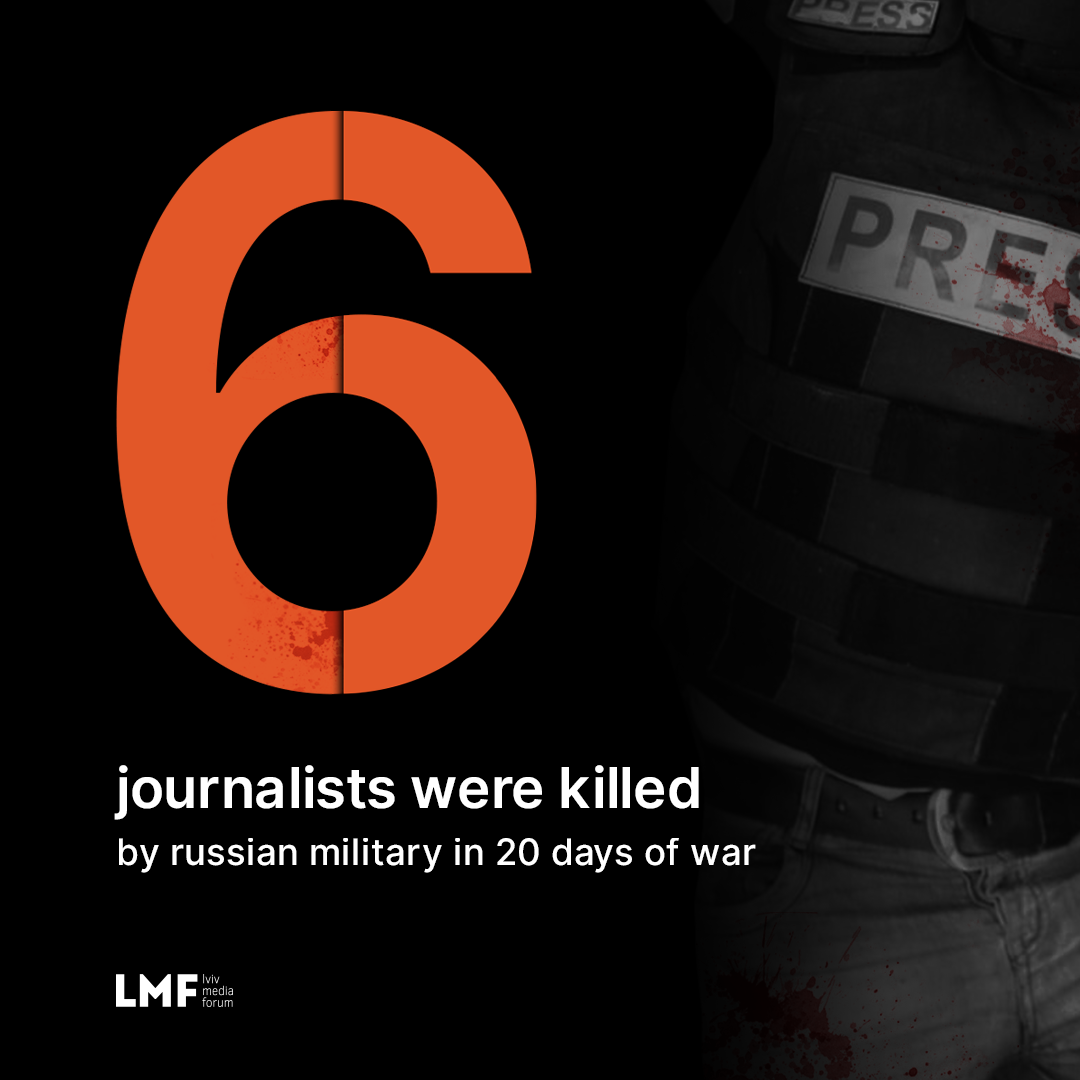 On March 12, Oleg Baturyn, a journalist of the Kherson newspaper “Novyi Den” and the head of the public organization “Europrostir” which is engaged in journalistic investigations into life in the occupied territories and corruption in the regions, disappeared in Kakhovka. Baturyn’s wife told the Ukrainian Institute of Mass Media about this. According to her, the man planned to meet with a friend near the bus station in Kakhovka: “At about 4:30 pm, Oleg went to a meeting, leaving his phone and documents at home. He promised to return in 20 minutes. But he did not return”. In local chat rooms, people reported that at about 4:50 p.m., Russian soldiers were spotted near the bus station. At that time, the Russian troops did not have a permanent location in Kakhovka, but already occupied the neighboring city — Nova Kakhovka. It is unknown at this time whether the Russian military will be involved in the journalist’s disappearance. It is still unknown where Oleg Baturyn is and in what condition.

On February 26, journalist Stefan Weichert and photographer Emil Filtenborg Mikkelsen came under fire in Okhtyrka, Sumy oblast. Their car marked “TV” on the glass was shot without warning by a man in clothes without identification from a weapon “resembling an assault rifle”. Both journalists were wounded. As Weichert later testified, his colleague received a bullet in each leg and two in the back, he himself — one in the shoulder. According to preliminary information, Russian saboteurs were operating near the Okhtyrka front line that day but as of now it is impossible to establish who is behind the attack on journalists.

It is worth noting that the Armed Forces of Ukraine ask the film crews to mark their company cars and bulletproof vests with the inscription “PRESS”, as the sign “TV” from afar may be similar to the marking of enemy vehicles — “V”.

On February 28, near the village of Stoyanka, Kyiv oblast, Russian saboteurs fired on the camera crew of the British TV channel “Sky News”. Correspondent Stuart Ramsay was injured in the lower back, cameraman Richie Mockler saved a bulletproof vest from two direct shots. Journalists returned to Kyiv and at first thought they were being mistakenly fired upon by Ukrainian military. The video shows them shouting loudly: “Stop!”, and “We are journalists!”, however, their cars were continued to be shot. “The windshield cracked from the first shot. Cameraman Richie Mockler shrank in the front passenger’s legroom. Then we came under full attack. Bullets pierced the entire car, tracers, flashes of bullets — windshield, plastic seats, steering wheel and instrument panel shattered,” — later reporters were telling. They managed to get out of the car and hide from the locals.

On March 6 near the village of Vodiano-Loryne of Mykolaiv oblast, the Russian military wounded the Swiss journalist Guillaume Briquet. He received shrapnel wounds to his face and forearms. According to the correspondent, a few minutes after crossing the Ukrainian checkpoint, the Russian military fired at his car at close range which was clearly visible “Press”. After Briquet stopped at the roadside, the Russians approached him, called him, searched him, confiscated his passport, 3,000 euros in cash, personal belongings, a helmet, a laptop and camera footage. When the journalist was released, Briquet went to the hospital in Kropyvnytskyi, where he was treated. “They were less than 50 meters from us. They clearly were firing. If I hadn’t bent down, I would have been shot. I have been shot in conflict zones before but I have never seen anything like it. Journalists who travel through this country without experience of war are in mortal danger», — Briquet quotes “Reporters sans frontières”, an international human rights organization.

The Ukrainian Radio Liberty correspondent Marian Kushnir was wounded on March 11 in Baryshivka, Kyiv oblast, as a result of a nighttime missile strike or an air strike by Russian troops. The journalist received a contusion, on a short video on social networks it is visible that from ears of the man there is a blood. The journalist was given medical care by military medics and he is now in a satisfactory condition.

On March 13, in Irpin, the Russian military fired on a car carrying American journalists. Photojournalist Juan Arredondo received a shrapnel wound to the thigh, his colleague Brent Renaud died from a neck injury. Arredondo was taken to the “Okhmatdyt” hospital in Kyiv where he was operated on twice by surgeons. Currently, his condition is stable.

On March 14 in Kiev oblast, the Russian military wounded British Fox News TV channel correspondent Benjamin Hall. According to the Prosecutor General of Ukraine Iryna Venediktova, he received a fragmentary fracture of both legs: “The journalist is currently in intensive care under medical supervision. […] This man was not at the military facility, which, according to Russian officials, they are constantly targeting. He was seriously wounded while not being at the military facility”. Subsequently, the Ministry of Defense of Ukraine added that doctors were forced to partially amputate Hall’s leg. 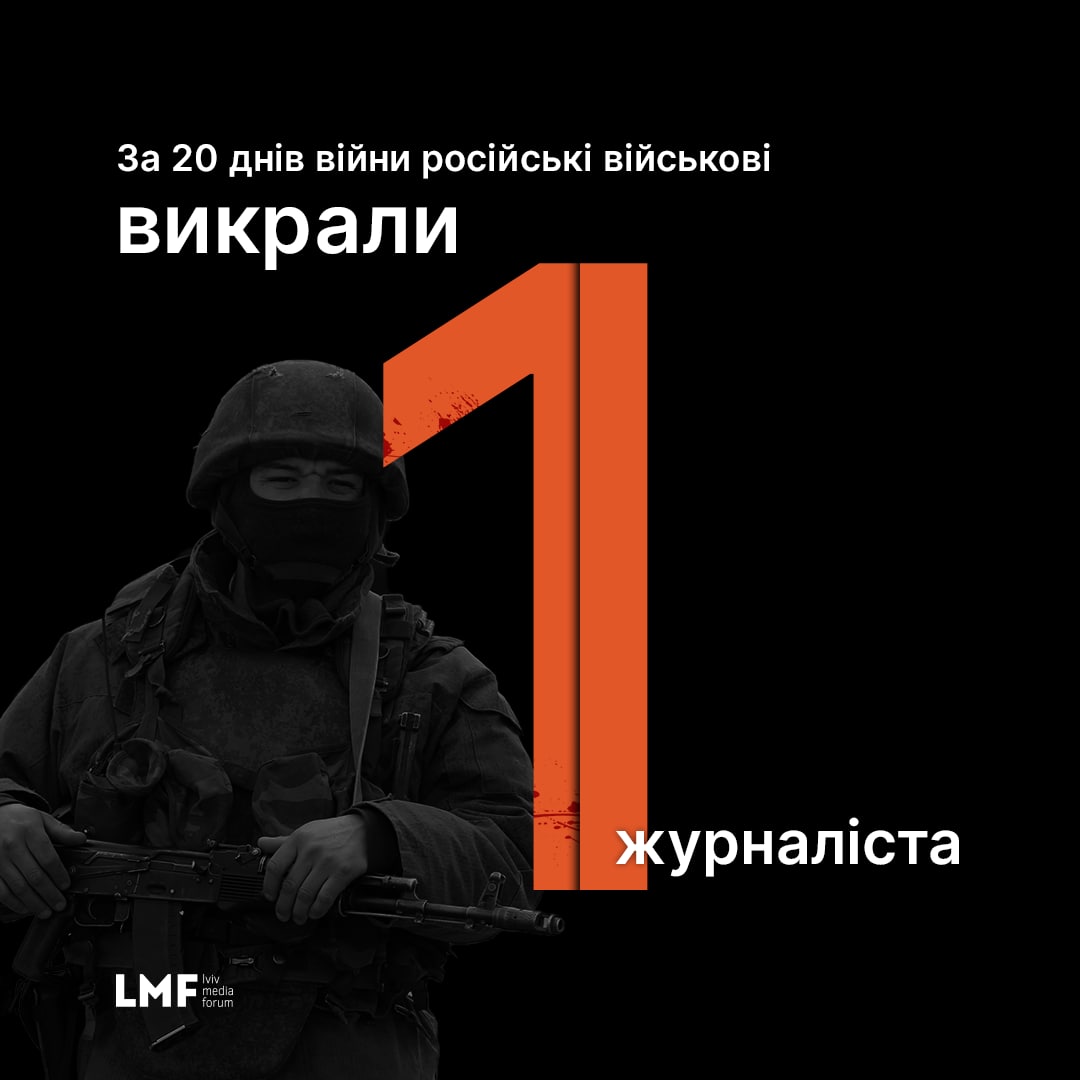 On March 4, in Kalynivka, Kyiv oblast, a car of Czech Voxpot reporters Majda Slamova and Vojtěch Boháč, marked as the “Press”, came under targeted shelling by Russian military. They were accompanied by two unnamed Ukrainian colleagues. All journalists survived but numerous shots from a Kalashnikov rifle remained on the car door.

On March 6, in Irpin, the Russian military fired on the car of the camera crew of the pan-Arab TV channel Al-Araby TV, despite the fact that journalists hung a white flag on it and had a “Press” sign. The correspondent Adnan Can Atayturkmen and his fellow cameraman Habip Demirci were forced to leave the car and hide in the homes of local residents.

On March 8, Ukrainian journalist of Hromadsky Victoria Roshchina reported that she had come under fire from the Russian military a few days earlier on her way to Novoselivka, Zaporizhia oblast. According to her, a column of Russian tanks was moving towards them. When the driver tried to turn around and go in the opposite direction, the car was fired upon: “I ordered to stop, throw the car and lie down in the field. But the columns came at us and the rescue was an abandoned house, behind which they waited for the passage of Russian equipment”. While the journalist and the driver were hiding from the shelling, the Russian military stole a laptop, a camera and a backpack with personal belongings from their car. 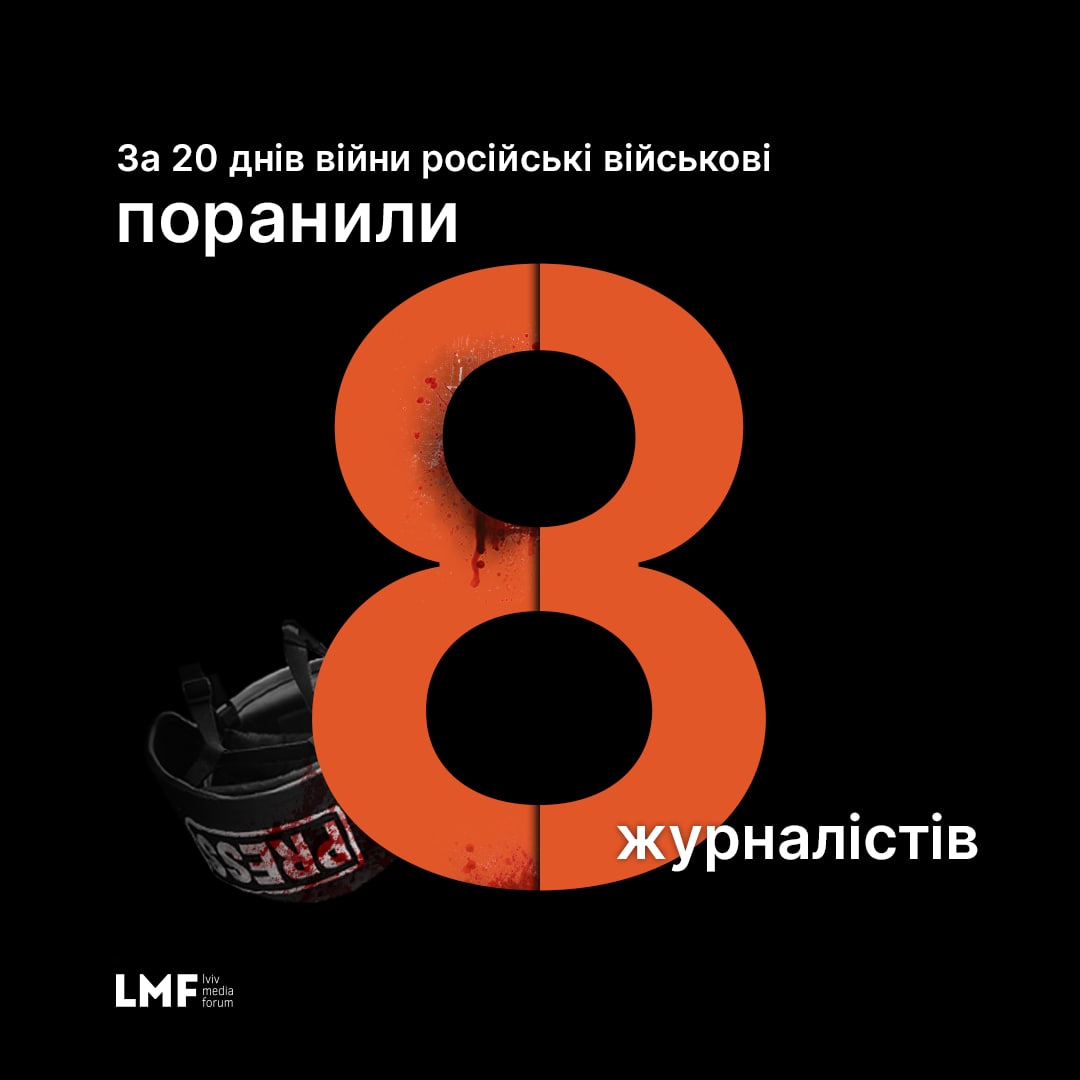 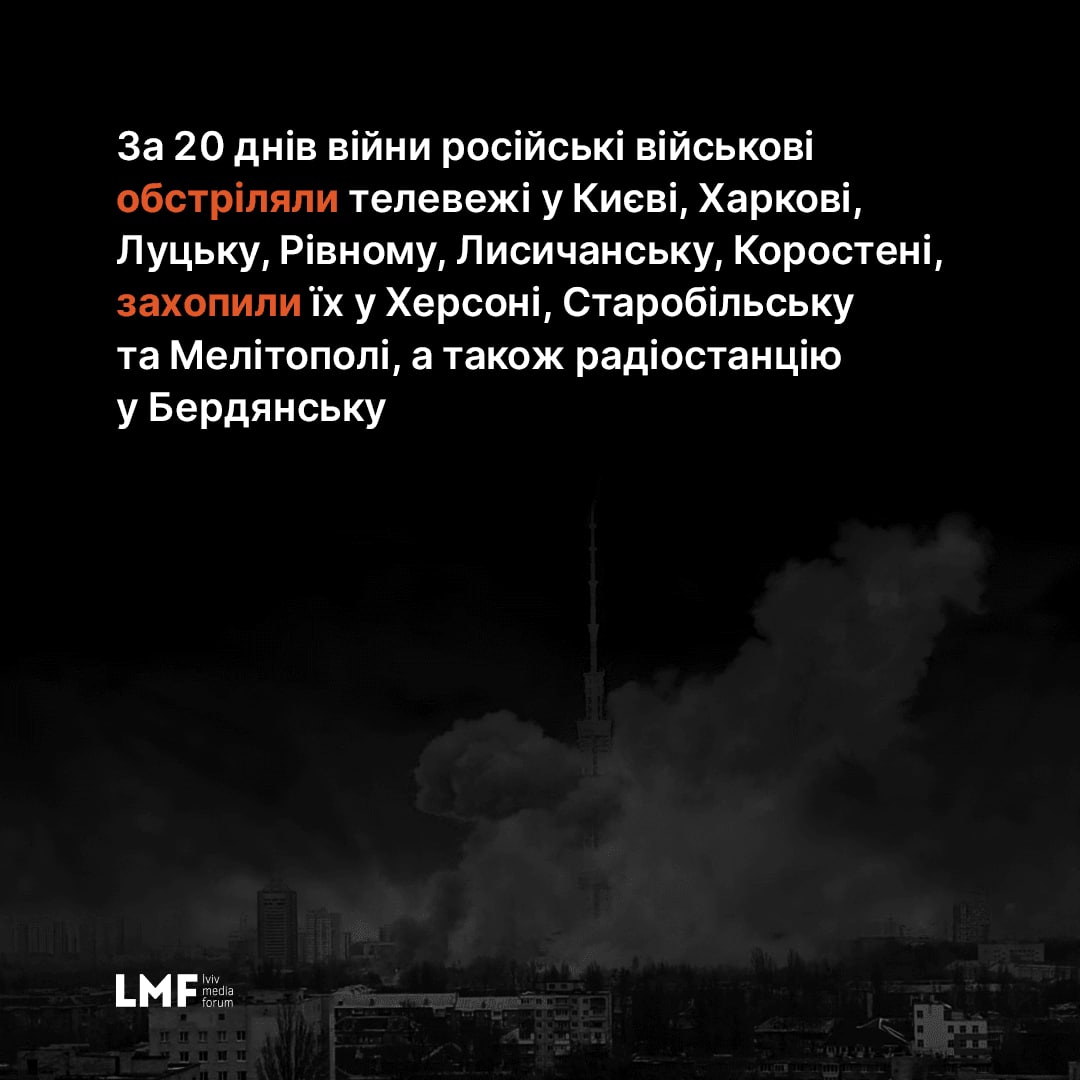 The Russian military is also systematically trying to isolate Ukrainians in the occupied territories from the Ukrainian media and replace their broadcasts with Russian state propaganda.

Almost every day there is information from the Russian-occupied regions about the constant pressure on local journalists who are forced to retransmit Russian propaganda by threatening the lives and health of them and their relatives. In particular, on March 13 the head of the Zaporizhia oblast military administration Oleksandr Starukh described a situation in occupied Berdiansk: “The occupiers rewrote the addresses of journalists and their relatives. They are forced to work for Russian propaganda. They threaten their children, parents and wives. They are trying to carry out terror and total intimidation”.

For the same purpose, the Russian military has already fired on TV towers in Kyiv, Kharkiv, Vinnytsia, Rivne, Lysychansk, Korosten, captured them in Kherson, Starobilsk and Melitopol, as well as a radio station in Berdiansk.

On March 4, “Reporters Without Borders” filed a complaint with the Prosecutor General of the International Criminal Court regarding Russian strikes on four (as of that time) radio and TV towers in Ukraine, as a result of which at least 32 TV channels and dozens of radio stations could not broadcast.

“The deliberate bombing of many media installations, such as TV towers, is a war crime and demonstrates the scale of Putin’s offensive against the right to news and information, — Reporters Without Borders Secretary-General Christophe Deloire noticed. — These crimes are even more serious because they are part of a plan, policy and large-scale”.