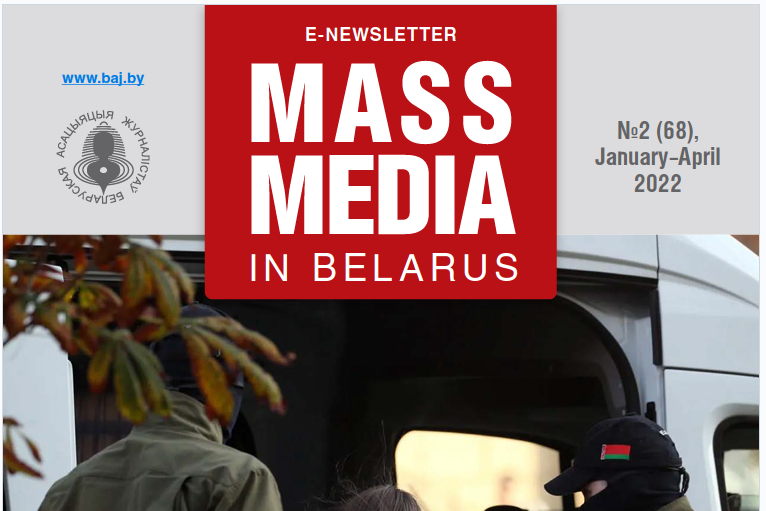 The Belarusian independent media with relocated editorial teams continued their activities from abroad. The ‘MediaPortBelarus’ co-working opened its doors for the Belarusian journalists in exile in Belastok on January 18, 2022.

Radio Free Europe / Radio Liberty opened its newsroom in Vilnius in March 2022. It was joined by the journalists of RFE/RL Belarusian Radio Service, who were forced to leave Belarus. https://www.svaboda.org/a/31757988.html

The team of ‘New Land’ Belarusian Investigative Center (BIC) received a prestigious journalist award in Lithuania (alongside the Lithuanian Web-portal Siena.lt. The Future Story Award 2021 was presented to the media for the best investigative material. The BIC became a full member of the Organized Crime and Corruption Reporting Project (OCCRP) on April 18, 2022. The international investigative journalism network unites mass media from 42 states. The BIC is the first media outlet that represents Belarus there.

The Belarusian Association of Journalists received three international awards for its activities on the eve of the World Press Freedom Day, celebrated on May 3rd.

In particular, the Belarusian Association of Journalists was named as the winner of this year‘s UNESCO/Guillermo Cano World Press Freedom Prize on April 27, 2022:

“By awarding the prize to the BAJ, we are standing by all journalists around the world who criticize, oppose and expose authoritarian politicians and regimes, by transmitting truthful information and promoting freedom of expression”, said Alfred Lela, Chair of the Prize‘s international jury, and founder and director of an Albanian media organization. “Today we salute and praise them; we find a way to say: we are with you, and we value your courage”, he added.

Apart from the UNESCO Prize, the BAJ also received an award from the Swedish section of ‘Reporters without Borders’ (RSF) and the Difference Day Honorary Title for Freedom of Expression, presented by two universities in Brussels - ULB and VUB.

25 Belarusian journalists were behind bars at the end of April 2022. 9 of them were serving sentences in jails.

Moreover, the Belarusian journalists were subjected to arbitrary searches and detentions within the period under review. Thus, the searches were conducted in the editorial office of ‘Mahilouski Region’ Web-site as well as at the apartments of its three journalists within one day of January 14, 2022. (The employees had fled Belarus earlier.)

The Belarusian Association of Journalists registered no less than 10 cases of detention and 13 cases of searches in January – April 2022.

Four detainees were subjected to administrative arrests for the terms of 10-15 days within the reporting period.

The police seized a mobile phone from a photographer Siarhei Serabro on February 28, 2022. He spent around two hours in a police department. The persons, who detained him, thought that he was going to take footage of a public protest action against the war in Ukraine at the railway station in Vitsiebsk.

Four court verdicts were announced to journalists in January – April 2022. A sport journalist Aliaksandr Ivulin, a RL/RFE journalist Aleh Hruzdzilovich, and a manager of TAM.BY Web-site that is a constituent part of ‘TUT BY MEDIA’ Ltd. Darya Danilava were accused of ‘organizing and preparing actions that grossly violate public order, or taking active part in them’ under the frequently applied article 342 of the Criminal Code and sentenced to 2, 1.5 and 1.3 years in prison respectively. (Daria Danilova was released from custody in the courtroom).

The ‘Nasha Niva’ online newspaper employees Yahor Martsinovich and Andrei Skurko were sentenced to 2.5 years in prison each on the absurd charges of causing large-scale property damage (Article 216 of the Criminal Code) for paying the editorial office utilities at the rate for individuals instead of the rate for legal entities.

Dzmitry Luksha, a freelance correspondent for the ‘Khabar 24’ TV Channel from Kazakhstan was detained and placed in custody on March 11, 2022. A criminal case was filed against him under two articles of the Criminal Code - 369-1 (‘discrediting the Republic of Belarus’) and 342 (‘arrangement or active participation in group actions that grossly violate public order’). It is known that the accusations were grounded upon his most recent report, which was broadcast by the Kazakh TV channel.

Aksana Kolb, the Editor-in-chief of ‘Novy Chas’ newspaper was arrested on April 20, 2022. The www.novychas.by Web-site was blocked for access from Belarus in October 2021. However, it was regularly updated afterwards. Consequently, Ms. Kolb was presented charges under article 342 of the Criminal Code (‘arrangement and preparation of actions that grossly violate public order or active participation in them’).

Moreover, the Belarusian authorities filed criminal cases in relation to Sviatlana Harda, Director of ‘Media-Palessie’ Independent Regional Portal (article 424 of Criminal Code – ‘abuse of power or authority’ and Ihar Kazmierchak, the founder of Orsha.eu Regional News Web-site (article 368 of Criminal Code – ‘insult to the President of Belarus’) within the period under review.

A criminal case against four employees of the BelaPAN News Agency was sent to court in April 2022. Consequently, the authorities revealed the charges, presented to them. Andrei Aliaksandrau and his girlfriend Iryna Zlobina were accused of preparing “at least 260 persons for participation in group actions that grossly violate public order” (Article 342 of the Criminal Code) and taking part in the activities, “aimed at causing harm to the national security of the Republic of Belarus” (Article 356 of the Criminal Code) for their payment of other people’s fines, lawyers’ bills and other fees with the assistance of ‘ByHelp’ Solidarity Fund.

Andrei Aliaksandrau, Dzmitry Navazhylau and Iryna Leushina were accused of creating an extremist formation from among the employees of ‘BelaPAN’ Closed Joint Stock Company and other individuals, as well as of leading such a formation (Article 361-1 of the Criminal Code). Moreover, Andrei Aliaksandrau and Dzmitry Navazhylau were accused of tax evasion by the news agency (Article 243 of the Criminal Code). https://sk.gov.by/ru/news-usk-gminsk-ru/view/podrobnosti-prestupnoj-dejatelnosti-rukovoditelej-i-rabotnikov-belapan-11143/

Moreover, it became known that Iryna Slaunikava, who is a former employee of the Belsat TV channel and a full-time employee of the Polish Television, was additionally charged with creating an extremist formation (Article 361-1 of the Criminal Code). The journalist has been in custody since October 2021, being accused of ‘arrangement or participation in group actions that grossly violate public order.’ Subject to the presentation of new charges, Ms. Slaunikava faces up to 7 years in jail.

A Belsat TV journalist Katsiaryna Andreyeva is serving a two-year term in a penal colony. She has been presented new charges of high treason under Article 356 of the Criminal Code. The essence of new accusations is not clear, but the journalist can be sentenced to 7-15 years in jail. https://baj.by/ru/content/zhurnalistke-belsata-katerine-andreevoy-predyavleno-obvinenie-v-gosizmene

The Criminal Code of Belarus was supplemented with article 130-2 - ‘Denial of genocide of Belarusian people’ within the period under review. It was done in compliance with the new law ‘On genocide of the Belarusian people’, adopted on January 5, 2022. The law introduced a monopoly on the interpretation of events in 1941-1951 in violation of principles of freedom of speech. The article of the Criminal Code provides for a penalty of up to 10 years in prison.

The Russian periodical edition TJournal was blocked for posting the information that had been recognized as ‘extremist materials’ by decision of the Ministry of Information of Belarus on February 9, 2022.

Since the beginning of Russian aggression against Ukraine on February 24, 2022, the Belarusian authorities have blocked public access to 6 Ukrainian news Web-sites – ‘Gordon’, ‘Obozrevatel’, ‘RBK-Ukraine’, ‘InfoResist’, ‘Novoye Vremya’, and ‘Focus’.

A list of citizens of Belarus, foreign nationals and stateless individuals involved in extremist activities was published for the first time on March 23, 2022. It includes the names of bloggers Siarhei Piatrukhin and Aliaksandr Kabanau, who are serving prison terms at the moment. https://humanconstanta.org/ekstremizm-na-fone-vojny-obzor-borby-s-ekstremizmom-v-belarusi-za-yanvar-mart-2022/

The process of bringing people to administrative liability for the alleged ‘distribution of extremist materials’ has become much broader with 237 individuals detained since the beginning of 2022. (To be compared to 315 people, who were detained on the same charges in 2021.) According to a representative of the Ministry of Interior of Belarus, ‘the quantitative growth of detainees is due to the fact that the number of Telegram channels recognized as extremist is increasing’.

The Editor-in-chief of ‘Intex-press’ Web-site Uladzimir Yanukovich and the ‘Media Hantsavichy’ enterprise that is the owner of ‘The First Region’ Web-site were fined for the alleged ‘distribution of ‘extremist materials’ within the period under review.

The Belarusian authorities continued taking measures, in order to restrict access to the content of independent mass media in January – April 2022. In particular, the Web-site of ‘Gazeta Slonimskaya’ – www.gs.by – was blocked for access in February 2022.

The blocking of access of Web-users from Russia to certain Belarusian independent media became a new phenomenon within the period under review. It was done due to the fact that the media resources covered the military conflict in Ukraine. The news websites Zerkalo.io, Nasha Niva, ‘European Radio for Belarus’, ‘Media-Palessie’, ‘Salidarnasts’ and reform.news were blocked for public access in Russia by decision of the Federal Service for Communications, Information Technology and Mass Communications (Roskomnadzor) or the Prosecutor General's Office. The editorials of Web-sites www.greenbelarus.info and www.brestnote.by received requests from the Russian authorities to remove publications about the situation in Ukraine within the reporting period.

The Ministry of Information of Belarus issued warnings to two popular Belarusian radio stations – ‘Radio Roks-M’ and ‘Radio BA’ in March 2022. The FM radio broadcasters were accused of violating the mass media legislation. The first warning contained the following statement: ‘Grounding upon the monitoring results, there were revealed numerous facts of distribution of materials that are not related to the components of the specialization, which is reflected in the registration documents of the radio program’.