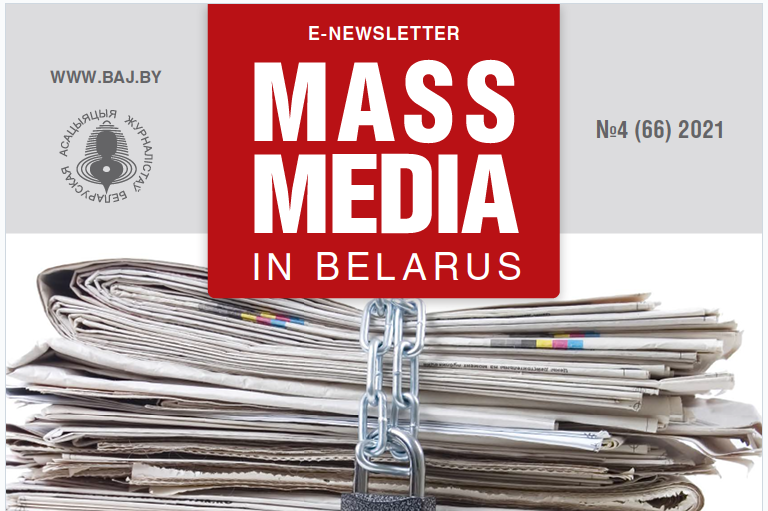 The general situation in the Belarusian media sector has critically aggravated since the day of Presidential election a year ago. Mass media and journalists have suffered from the unprecedented wave of repression. The Belarusian journalists were detained more than 500 times by the representatives of law-enforcement agencies after the election. More than 130 colleagues were sentenced to different terms of administrative arrest. 68 colleagues were attacked or wounded. Over 60 mass media representatives were prosecuted on criminal charges. As of October 3, 2021, 29 of them were imprisoned or kept in temporary detention centers.

Dozens of legal entities of media organizations have been liquidated or are in the process of liquidation. The information products of mass media, Web-sites, and bloggers have been broadly recognized as extremist with the consequent ban on their distribution by other actors in the media field.

Around 140 searches and inspections have been conducted at the offices of the majority of independent national and regional media organizations as well as at the apartments of their employees. They were accompanied with the seizure of technical equipment, documents, and cash.

The authorities have restricted access to more than 100 socio-political Web-sites and the Web-sites of media outlets. The majority of national and regional newspapers were forced to terminate their publishing in the print version. However, they continued to be published online. The supporting media organizations were persecuted, too.  Thus, the authorities deprived over 270 NGOs of their legal status, including the Belarusian Association of Journalists and the Belarusian PEN Center, led by Noble Prize winner Sviatlana Aleksiyevich.

The Press Club Belarus officeres suffered from repression as well. The non-for-profit organization was liquidated, too.

The pressure on mass media and their employees continues and grows.

The Belarusian authorities continued to restrict the activity of independent print media, paying special attention to the mass media, reporting on socio-political issues.

Thus, in 2020, the media outlets were deprived of the opportunity to print and distribute their print-runs. In 2021, these restrictions were supplemented with the pressure on the part of the police and public prosecution bodies as well as legal proceedings against the media outlets and their employees. Moreover, as a result of the adopted amendments to the Belarus Law 'On Mass Media', additional restrictions were introduced on the establishment, registration, and distribution of Belarusian and foreign media. Thus, e.g., the people, who have been recognized as members of the allegedly 'extremist' organizations, cannot become founders of mass media within five years since the moment of this recognition.

Mass media production could be terminated by a court decision before the amendments to the law came into force.  However, presently, it can be done by the decision of the Ministry of Information, among other, grounded on two or more official written warnings of the Ministry to the respective media outlet.[1]

Obstacles to the independent press printing and distribution

Since the summer of 2020, the state-owned printing houses have refused to print the leading non-state newspapers 'Narodnaya Volya', 'Komsomolskaya Pravda in Belarus', 'Svobodnye Novosti Plus', and 'Belgazeta'.  'Narodnaya Volya' and 'Komsomolskaya Pravda in Belarus' started publishing their circulations outside Belarus. However, the de-facto monopolist state-owned retail sales networks of press distributors 'Belposhta' and 'Belsayuzdruk' refused to sell the newspapers, despite the presence of existing contracts.

The following media outlets terminated publication of their periodicals in the print version in 2021: 'Brestskaya Gazeta'[2], 'Leader-Press' (Salihorsk)[3], 'Intex-press' newspaper (Baranavichy)[4], 'Inform-progulka' newspaper (Luninets)[5], 'Rehiyanalnaya gazeta' (Maladziechna)[6] and 'Novy Chas'[7]. As a rule, this step was preceded by the refusal of 'Belsayuzdruk' to distribute the print media through its network and the exclusion of the print media from the 'Belposhta' subscription catalogues.

'Gazeta Slonimskaya' and 'Otdushina' newspapers (Slonim, Hrodna region) couldn't resume their publication after the suspension of activity, following a search and the seizure of technical equipment in November 2020. On May 24, 2021, the Ministry of Information included both newspapers into the Register of print mass media. However, the printing houses refused to print their circulations.[8]

The ‘Narodnaya Volya’ newspaper tried repeatedly to arrange the printing of its issues in Russia, all in vain. The contracts were cancelled subject to intereference from the authorities.[9] 'Belposhta' made use of this situation to sue 'Narodnaya Volya' for reimbursement of costs for the newspaper copies, which hadn't been received since August 2020. The amount to be paid was pronounced by the Economic Court of Minsk at the end of October 2021. It totaled 108,000 Belarusian rubles (over USD 42,000).[10]

On December 1, 2021, it was reported that the OJSC 'Brest Printing House' refused to print the regional 'Hantsavitski Chas' newspaper.[11]

The magazines 'Our History', 'Attention, Children!', and 'Duda' were deprived of the possibility of distribution through the state-owned sales networks.[12]

Having lost the possibility to publish the print versions of newspapers, most media outlets continued their activity online.

The 'Leader-Press' newspaper was published in Salihorsk (Minsk region) during 28 years. The media outlet terminated its activity on October 1, 2021. A range of searches was conducted at the editorial office and at the owners' apartments in the summer of 2021. The editorial addressed the newspaper readers as follows: 'It looks like any material that truthfully covers the events in the region or in the country can be declared extremist with all the ensuing consequences. In this situation, we cannot put our employees at risk. Therefore, we are forced to terminate the activity of our media outlet.’[13]

The publication of 'Verasen' literary magazine was terminated within the period under review, since its founder - 'The Belarusian Language Society' was deprived of official registration.[14]

The termination of independent print media publishing was accompanied by the emergence of unregistered publications, produced by activists, and mainly containing reprints of materials from independent news Web-sites.

The people involved in distributing such newspapers were prosecuted and punished with fines in January – March 2021.

Thus, Yury Laktsiyonau was fined 638 Belarusian rubles for distributing the copies of a small circulation newspaper 'Grodnenskoye Vremia' ('Hrodna Time') in Hrodna on February 1, 2021. The periodical was distributed free of charge in the mailboxes. (16 issues of 'Grodnenskoye Vremia' have been published since August 2020.)[15]

Dzmitry Shashkou was detained while transporting 4,000 copies of this newspaper on February 11, 2021. He was sentenced to 10 days of administrative arrest, allegedly, for disobedience to the police, and fined 1,450 Belarusian rubles.[17]

Tatsiana Yukho was detained and fined for distributing the 'Vitsiebsky Vesnik' unregistered periodical edition in Vitsiebsk on February 10, 2021. The police seized 500 copies of the digest at her private apartment.[18]

Reportedly, two residents of Minsk district were detained in March 2021. 15,000 copies of 'protest newspapers' were found in the private car of one of them, who was active as the Web-administrator of 'Atolina' Telegram channel. According to the Legal Investigation Committee, the second detainee was the director of a private printing house, dealing with production of advertising materials. The officials accused the detainee of producing more than 21,000 copies of 'radical' newspapers as well as more than 10,000 copies of leaflets to be disseminated in the city of Minsk and on the territories of Mahilou, Minsk, Homiel, and Hrodna regions. Following the legal investigation, the people's activity on production and distribution of information materials was recognized as criminal in line of article 361 of Belarus Criminal Code ('calls for actions, aimed at causing harm to the national security of the Republic of Belarus').[19]

Repressions against the print press representatives

The employees of independent print media were subjected to pressure from the governmental authorities, the police, and the public prosecution bodies.

Thus, on March 24, 2021, Piotr Huzayeuski, the Editor-in-chief of 'Hantsavitski Chas' independent regional newspaper and two correspondents Siarhei Bahrou and Aliaksandr Pazniak were summoned to the Public Prosecutor's office, where official warnings were pronounced to Bahrou and Pazniak.[20]

The ‘Novy Chas’ newspaper received a warning from the Ministry of Information on March 25, 2021. It was issued for publishing four articles that allegedly contained information that ‘contributed to causing harm to the national interests of the Republic of Belarus.’[21]

The Prosecutor General's office issued another warning to the newspaper Editor-in-chief in May 2021. It was presented in connection to the fact that the authors of some publications 'used certain expressions and phrases that contributed to the heightening of tension in society as well as incitement of hatred and enmity against governmental officials and law enforcement officers as separate social groups.’[22]

The 'Intex-press' regional newspaper from Baranavichy (Brest region) suffered from persecution for publishing an interview with Sviatlana Tsikhanouskaya on April 14, 2021. The newspaper Editor-in-chief Uladzimir Yanukevich received a warning from the Public Prosecutor's office on the following day.[23] Then, he was fined the maximum possible sum for 'violating the mass media legislation' – 580 Belarusian rubles (approx. USD 240).[24] In addition, the 'Intex-press' Publishing house was fined 4,350 Belarusian rubles (approx. USD 1,780) later on.[25]

Following the claim, filed by the Public prosecutor's office, the published interview with Sviatlana Tsikhanouskaya and its video recording were officially recognized as extremist materials.[26]

Another series of searches was conducted at the editorial offices of independent media and journalists' private apartments in July 2021. They were accompanied with interrogations and seizure of technical equipment. Consequently, a number of regional newspapers ceized to be published in the printed form.[27]

A series of searches took place at the ‘Novy Chas’ editorial office as well as at the newspaper employees’ private apartments in October 2021.[28]

Henadzi Mazheyka, a journalist of 'Komsomolskaya pravda in Belarus' was detained by special services in Moscow and deported to Minsk on October 1, 2021. The detention was reasoned by the publication of his article on the www.kp.by Web-site in the evening of September 28, 2021. The publication contained a former classmate's positive remark about the IT specialist Andrei Zeltser, who participated in a tragic incident that cost lives to a KGB officer and Zeltser. Although the editorial deleted the text in a couple of minutes after its publication online, the Web-site www.kp.by was blocked for access on decision of Ministry of Information of Belarus on the following day. Allegedly, the publication 'contributed to forming the sources of threats to the national security'.

Henadzi Mazheyka was taken into custody. He was presented charges under two articles of the Criminal Code of Belarus – article 130 ('inciting racial, national, religious or other social hostility or hatred') and article 369 ('insulting a government official').