As Belarus’s August 9, 2020, presidential election nears with President Aleksandr Lukashenko vying to remain in power after 26 years in office, press freedom advocates say Belarusian authorities are cracking down on journalists and government critics. 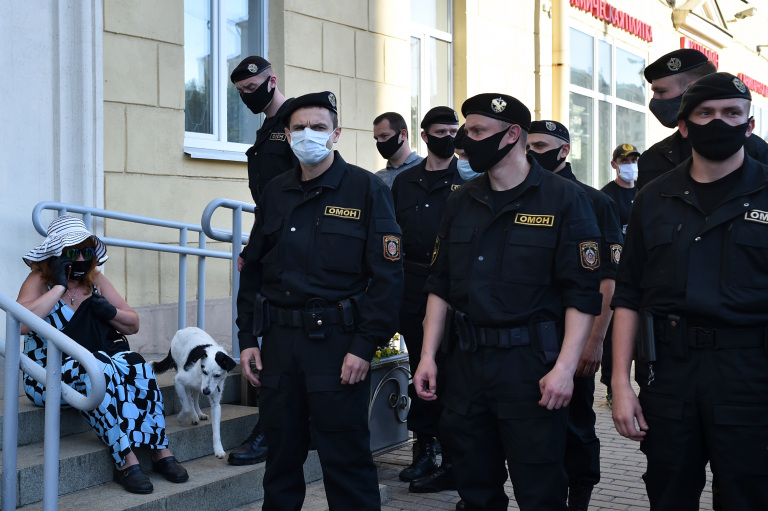 That incident followed another spate of arrests between May 7 and May 15, when Belarusian authorities detained five journalists for 10 days each on charges that they had participated in rallies for an opposition figure Siarhei Tsikhanouski when they had actually been reporting on the rallies, according to CPJ research. Tsikhanouski, a Belarusian vlogger, had sought to run for president but was barredExternal link by the Central Election Commission.

Some reporters covering coronavirus have also faced threats. On March 25, Siarhei Satsuk was detained and a bribery investigation was opened against him. Press freedom advocates say he was targeted for his reporting on COVID-19, as CPJ documented. He was released on April 4 without being formally charged, according to news reportsExternal link, but the investigation continues.

Amid these developments, CPJ spoke about press freedom in Belarus via phone with Barys Haretski, the deputy head of BAJ, and Yury Drakakhrust, a Prague-based correspondent for Radio Free Europe/Radio Liberty, which is funded by the U.S. Congress. Drakakhrust often visits Belarus and writes stories for Belarusian independent media. Their answers have been edited for length and clarity.

What is the overall state of the media in Belarus today?

Drakakhrust: The main problem is that the state monopolizes the information space in the country and is now trying to do even more to control non-state media. The state has managed to monopolize TV broadcasting completely. Social media feels the pressure, too. The state wants independent internet sites to get as little paid advertising as possible and does everything it can to achieve this goal [by privately pressuring companies not to advertise with independent outlets]. In Belarus, the state has a lot of power. However, Belarus is not North Korea and relative freedom of speech exists.

Haretski: All television channels are state owned, and there is one independent satellite station, Belsat TV, which broadcasts from Poland. It has correspondents in Belarus. People usually watch Belsat TV online. Many state-owned TV channels rebroadcast Russian official channels. When it comes to newspapers, there are federal and regional newspapers, all controlled by the state. These newspapers have a very large circulation and have some influence. In Belarus, there’s a phenomenon known as “obligatory subscription.” If you, say, work in the police, you are obligated to subscribe to a newspaper published by the Ministry of Interior [so that public employees are exposed to the same opinion]. There is not a single radio station in Belarus which has serious, independent content but there is one independent news agency, BelaPAN. [Editor’s note: A recent report in Belarusian state media deniesExternal link that “obligatory subscription” exists.]

What is the influence of the internet and social media on society?

Haretski: Independent media started to proliferate on the internet in 2005 and 2006. In Belarus, Tut.by became the largest independent online news outlet with some one million readers per day. Meanwhile, there many independent local or regional online news outlets. There are also state-owned news outlets, but they are not popular. Who would read an official news site about COVID-19, which says that everything is going well? People see the problems with their eyes and turn to the independent sites. If you compare the situation with Russia, [where the internet is more restricted] it is much better in Belarus. Belarusian authorities did everything to make sure the internet reached every corner of the country. It’s funny — now this effort has backfired on the authorities.

How is the work of independent media affected by the COVID-19 pandemic?

Haretski: Freelancers are outlawed. The federal Law of Mass Media defines journalists as people who work for one media outlet or another. You cannot just be a journalist. So freelancers are trying to get press credentials from media outlets. It is a big problem for those who produce work for Belsat TV and on the whole for those who write for foreign media. These people are finedExternal link. Last year, 180 fines were imposed for such an activity. In early June, a couple of journalists were fined for a freelance activity. As a rule, freelancers usually get a maximum fine, some US$500, per “illegally” freelanced piece.

How are the upcoming elections affecting press freedom?

Haretski: The pressure on the media increases as the election campaign is fought in the media. COVID-19 is now the second most important story, after elections. Starting on June 3, we have a new Minister of Information, Ihor Lutskyi. On June 7, Lutskyi said in an interviewExternal link [on the state-run station Capital TV] that independent media should be more tightly controlled. Even before Lutskyi became minister, news outlets were forbiddenExternal link from publishing polls about voter preferences. Of course, the pressure will grow. There will be rallies before the elections, and the police often aim to arrest journalists who are covering rallies. The authorities are less afraid of activists than journalists, whom they fear will conduct interviews and spread information.

[Editor’s note: CPJ emailed the Belarus Ministry of Information that oversees media outlets for comment on the following claims in the interviews above: that the government privately pressures companies not to advertise with independent media; that public employees are “obligated” by authorities to subscribe to certain news outlets; that the government forbids medical professionals from speaking with journalists without express permission, and that journalists have been punished for not securing such permission; that freelancers are illegal in Belarus and fined if they are found to be reporting without a press card from a recognized media outlet; that 180 fines were issued to freelancers last year and that two journalists were fined recently; and that Belarusian police aim to arrest journalists covering political rallies. CPJ did not receive a response.]