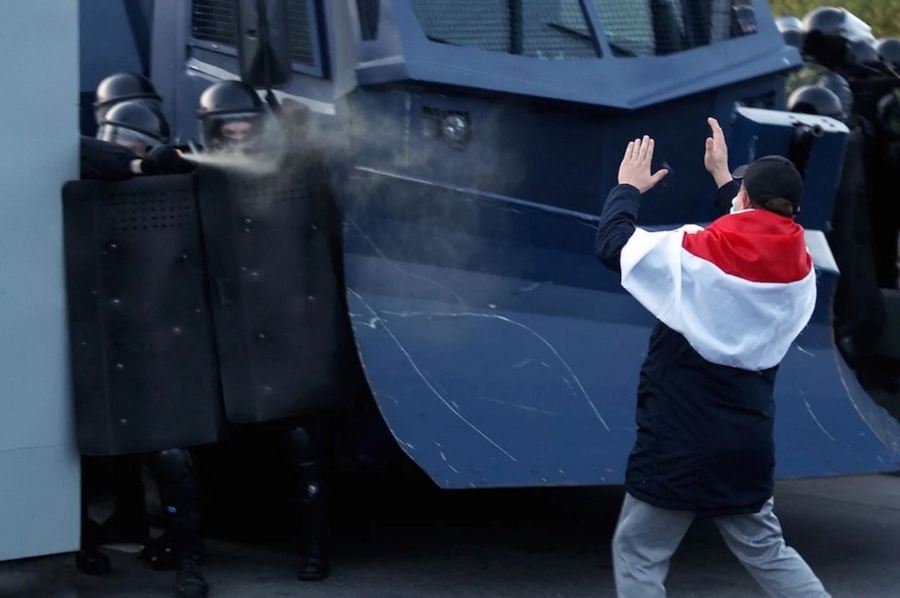 Riot police barricaded behind a water cannon tank fire tear gas against a peaceful protestor during a rally in Minsk, Belarus, 25 October, 2020, STRINGER/AFP via Getty Images

On the occasion of International Human Rights Day and in light of recent findings on Belarus by both the OSCE’s Moscow Mechanism and the UN High Commissioner for Human Rights, the below organisations are deeply concerned about ongoing abuses carried out by agents and supporters of the government of President Alexander Lukashenko and call for immediate investigations and redress.

The brutal crackdown represents a flagrant violation of the internationally protected rights to freedom of expression and information, association and assembly, and the cultural rights of protestors, opposition activists, and the journalists that have been covering the widespread and largely peaceful demonstrations in the wake of the 9 August presidential election results.

The OSCE Moscow Mechanism report – the result of an investigation requested by OSCE member states concerned with the alarming situation in Belarus – documents, and the research by the signatories of this statement show, extensive examples of excessive police violence and systematic torture, arbitrary detentions of peaceful protestors and the press, numerous politically motivated prosecutions, internet shutdowns and web blocking, as well as a range of other cruel acts of reprisal against those participating in or documenting the protests. On 4 December, UN High Commissioner for Human Rights, Michelle Bachelet confirmed many of these reports during an interactive oral update and noted that no improvements had occurred since the Human Rights Council held an urgent debate on Belarus in September – on the contrary, the crisis has only worsened.

These findings confirm the reports of human rights and press freedom organisations on the ground in Belarus, who continue to document abuses. We would like to draw attention to a number of recent cases that are emblematic of the heinous and protracted crackdown.

On 11 November, Raman Bandarenka was reportedly beaten to death while trying to prevent symbols of the protest from being torn down in a popular courtyard known by demonstrators as the “Square of Change” in Minsk. While the initial police report stated that Bandarenka had drunkenly approached a group of “concerned citizens” trying to confront those spreading “anti-government symbols”, subsequent reports by local journalists and human rights organisations, as well as prior instances of plainclothes police officers committing acts of violence against protestors, casts doubt on this theory and necessitates further investigation.

This case is demonstrative of both the cruel targeting of symbols and other forms of cultural resistance by poets, artists, musicians and others, as well as the brutality that has been inflicted on protestors in the course of carrying out tens of thousands of arrests and during their ill-treatment in detention, including through the use of torture.

Other alarming instances of repression of cultural figures include that of musician Aliaksej Sančuk, currently in detention and facing criminal charges of “gross violation of public order” for using his drums to set the rhythm of the marches during protests. Poet Dzmitry Strocaŭ was abducted in the courtyard of his house, hooded, handcuffed, then taken to the KGB (Committee for State Security) following participation in demonstrations and his expressions of solidarity through his poetry. Roberto Valdes Casanuevo, a graphic designer who has been living in Belarus with his family for over 30 years, faces deportation and a ban on entry to Belarus after renewal of his residence permit was refused due to his support for the protests. He would join many other cultural workers who have been forced to leave Belarus in the current context while the above cases are only a few of the nearly 400 cases of cultural rights violations that have been documented by organisations monitoring the situation signed below.

In addition, among the 9 journalists that are currently under investigation for carrying out their professional activities, Katsiaryna Barysevich, Katsiaryna Andreyeva (Bakhvalava) and Daria Chultsova are being held behind bars on criminal charges, in addition to those prosecuted on administrative ones. Barysevich, a journalist for TUT.by, is currently under investigation for the spurious charge of “revealing medical secrets” after quoting a doctor in a news report who stated that no alcohol was found in Bandarenka’s system, contrary to the reports of police. Belsat TV journalists Andreyeva and Chultsova are both being held based on charges of organizing a gathering that violates public order after livestreaming the violent dispersal of protests in the Square of Change.

These cases represent just a small fraction of more than 400 cases of press freedom violations that have occurred during the protests, including physical attacks, detentions, the destruction and seizure of equipment, and denial of accreditation.

The Government of Belarus is a party to the International Covenant on Civil and Political Rights (ICCPR), and the abuses documented contradict several articles under that treaty. They also violate protections guaranteed under the Belarusian Constitution and many would constitute offences under domestic criminal law.

However, Belarusian authorities have failed to investigate allegations of wrongdoing by law enforcement or other state agents, while over 900 cases have been brought against political opponents of the government. We therefore urge authorities in Belarus to take the following actions:

The undersigned organisations will continue to monitor the situation and demand that the above steps be taken immediately, and that the silencing of opposition voices and the media comes to an end.