Once again, a major sports event is met with criticism for being placed in a semi-authoritarian regime with bad human rights records. The EOC vice president defends the decision of awarding the European Games to Minsk but is ready to discuss how to implement broader human rights demands for countries hosting Olympic events. 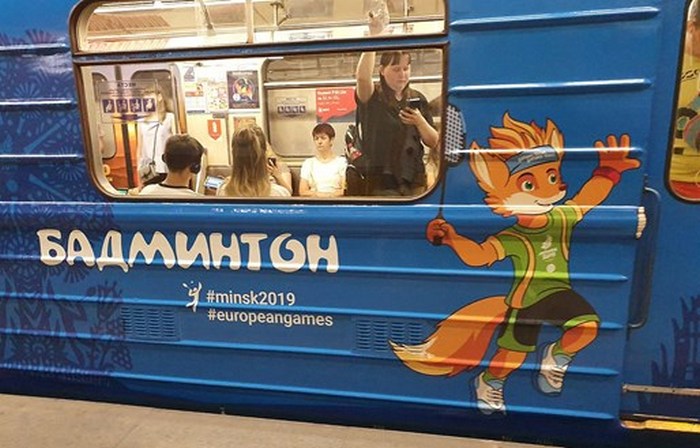 From the end of this week and nine days ahead, the second edition of the European Games will take place in Minsk in Belarus to the tones of a strong criticism from international human rights organisations.

In July, Belarusian president Alexander Lukashenko is celebrating his 25th anniversary as head of state. The former USSR Red Army officer came to political power in 1994 after the fall of communism in Eastern Europe when the Soviet republic was transformed into an independent nation.

Alexander Lukashenko has been called ‘Europe’s last dictator’ and state authorities in Belarus are infamous for their repression of political opposition, which includes a high number of crackdowns on representatives from independent news media, human rights defenders and lawyers who fight for democratic rights.

Like four years ago in Baku, when the first edition of the European Games was hosted by another autocratic nation, Azerbaijan, human rights advocates have repeatedly asked the owner of the Games, the Association of European Olympic Committees, EOC, why the majority of its associated members chose to place Europe’s biggest Olympic sports event in countries with bad human rights records.

According to Human Rights Watch’s 2018 country report on Belarus, civil society activists, lawyers, rights groups, and independent media representatives continued to face government harassment and pressure. Belarus authorities are said to have prosecuted dozens of journalist on a variety of arbitrary grounds and adopted new restrictions on internet freedom.

Belarus is also the only European country to use the death penalty, which according to Human Rights Watch is carried out by a shot to the head and without any information to families of either the execution date or the burial place.

EOC media hotline in Rome
As more than 4,000 athletes are now on their way to Belarus and Alexander Lukashenko is planning the celebration of his 25-year-long regime, Play the Game has asked the vice president of the EOC, Niels Nygaard, who is also the president of Denmark’s Olympic Committee, why the EOC has chosen Minsk.

Nygaard explains that three years ago, when several cities in the Netherlands withdrew their collective candidature for the European Games for economic reasons, Minsk showed an interest in taking over the Games on short notice. At first, Denmark and Norway protested because there were still economic and sports-related questions to be answered from Minsk.

“But a large majority of the other countries in the EOC did not want to wait for further examinations of the bid and accepted Minsk as the host country,” the EOC vice president says.

In relation to the human rights situation in Belarus, Nygaard notes that the country has signed a hosting contract with the EOC similar to the contracts that Olympic host countries are obliged to sign with the International Olympic Committee, IOC:

“The authorities have promised there will be no harassment of journalists during the Games. And if journalists have complaints, we encourage them to call the EOC on a phone number at our head office in Rome and we will try to help them solve their problems.”

Nygaard also say that by signing the EOC host contract, Belarusian authorities have promised not to harass anyone for sexual, religious or political reasons during the Games, and to secure rights for construction workers at the sporting venues. But according to the EOC vice president, the political responsibilities of the Olympic association stop at the stadium gate:

“Unless it has something to do directly with the Games, we do not interfere in a host country’s political affairs.”

‘Olympic values are not political demands’
Last month, both Human Rights Watch and the Committee to Protect Journalists used the international World Press Freedom Day on 3 May to put focus on the European Games in Belarus.

“Belarusian authorities have a long and sorry history of contempt for media freedom, so it’s likely they may harass independent journalists in the lead-up and during the European Games,” said Rachel Denber, deputy director of the Europe and Central Asia Division at Human Rights Watch, and called for the EOC to address this problem.

When Play the Game informs Rachel Denber of the decision to open a European Games media hotline at the EOC office in Rome, she is not impressed:

“Rome? That’s ridiculous. How can they help journalists in Belarus from an office in Italy? The hotline must be in Belarus and operated by people who know which authorities to contact in Minsk. Rome is not good enough.”

She is also critical of the EOC’s reluctance to interfere in host countries political affairs:

“Human rights are not political demands. According to the Olympic Charter they are Olympic values. Olympic sports organisations need to have tools to prevent people from being exploited. These human rights issues are directly related to hosting the Games,” Rachel Denber argues.

‘Smart’ media harassment
Statistics from the Belarusian Association of Journalists show a total number of 26 police searches of journalist and bloggers' homes and media offices in Belarus last year. In February 2018, a court also sentenced three bloggers to five years in prison for allegedly having ‘questioned Belarus’ sovereignty’ and ‘insulted the Belarus nation’. The bloggers spent 14 months in pre-trial custody before their sentences were suspended.

According to Gulnoza Said, who is the programme coordinator for Europe and Central Asia at the Committee to Protect Journalists, no Belarusian journalists are in prison at the moment because the authorities are using a new tactic designed to harass independent media representatives:

“They now do it in a ‘smarter’ way. They arrest journalists for a short period and give them a fine. In doing so, they obviously think it makes Belarus look a little bit better than countries, where critical journalists are send to prison.”

Like Rachel Denber, she calls on the EOC to put more pressure on the authorities in Minsk in order to improve media rights in Belarus:

“Politicians in autocratic countries love hosting sports event. They use the Games to showcase themselves. And they are doing it without the risk of being held accountable for spending public money on the Games,” Said says.

“I think, the authorities in Belarus will give the many foreign reporters a very warm welcome at the European Games, but I fear they will continue to harass the local journalists after the Games.”

Excessive state control
According to the Belarusian Association of Journalists, the vast majority of independent media in Belarus are focused on entertainment, but there are about 20 social and political news media that are not run by the state.

“Many of them do not have the official status of media, because they are not registered at the Ministry of Information, but they are quite popular,” says Barys Haretski, deputy chairman of the Belarusian Association of Journalists.

To him, independent news media in Belarus are challenged in many different ways: Excessive state control of the media sector makes it difficult to register a new publication focusing on social or political issues in the country. The authorities have a possibility to block websites for a number of reasons. The advertising market is limited, and there is a reluctance to advertise in non-state socio-political media.

“Journalists from non-state media have problems with access to information both in public and private organisations and institutions. They are under administrative and criminal pressure and risk detentions, fines, arrests, and criminal cases,” Haretski says.

In his view, the Belarusian authorities are afraid of independent journalists.

“Often the authorities prefer to gloss over the acute social, economic and political issues, while non-state media on the contrary pay attention to them: corruption, acts of violence and suicides in the Belarusian army, human rights, issues of social services and law enforcement agencies, and more.”

One way of attacking freedom of expression in Belarus is to prosecute journalists who cooperate with foreign media without accreditation. Last year, 118 freelance journalists had to pay fines of amounts between 230 dollars and 575 dollars. So far this year, 36 journalists have been fined.

As many independent journalists are still denied access to information and official accreditation, Haretski does not see any signs of improvement.

“The relationship remains cold. The European Games will hardly improve the situation.”

A special presidential decree
In order to help foreign media during the European Games, the Belarusian Association of Journalists has prepared a memo for foreign journalists who travel to Minsk.

“We describe the main legal aspects and safety measures, which foreign journalists should know of. And we also offer contacts at the Belarusian Association of Journalists in case foreign reporters get into trouble,” Haretski says.

Even though international media is expected to turn their attention to both the European Games, which are held from 21-30 June, and the 25th anniversary of Alexander Lukashenko’s Belarusian regime in July, Haretski does not expect that the political opposition will arrange massive protests against the regime, as a special presidential decree has approved additional measures during the Games:

“The document gives even more encouragement to the security forces to prevent any unauthorised street protests, and it is impossible to receive an official permission to hold a protest in the centre of Minsk,” he says.

“But we cannot completely eliminate the possibility of such protests. In that case, journalists need to be as careful as possible, as the police very often arrest media representatives along with protesters,” the vice chairman of the Belarusian Association of Journalists warns.

EOC: ‘The US also has the death penalty’
In listening to the critique, Niels Nygaard points out that the Olympic policy of not interfering in host countries’ political affairs might change in the future.

“Inside the Olympic Movement we have now begun to discuss whether we should implement human rights demands when we award Olympic sports events to a country. Personally, I think it is a very good thing that we have these discussions. But I do not want us to end up with just a handful of possible host countries.”

At a time when human rights are beginning to play a more central role in both the IOC and FIFA’s selection of host countries for big sports events, Nygaard also points to some of the challenges:

“According to the UN, more than half of the countries in the World have problems with human rights. As an example of the challenges we face, it is worth noting that a country like the US also has the death penalty.”

In the case of Belarus, Amnesty International is warning the Danish sports leaders and athletes about the country’s death penalty, restricted freedom of assembly, harassment of non-state media representatives and violent attacks on LGBTI-persons.

“LGBTI-persons in Belarus are often attacked and beaten up. Both on the street and in the legal system they feel discriminated. Belarus has a law which is similar to the one in Russia, where so called ‘propaganda for non-traditional sexual relations’ is forbidden,” the international human rights organisation states in its advice.

The Amnesty report on Belarus does not upset Niels Nygaard, though:

“Amnesty International has not advised us not to go to Minsk. But I do hope that more countries, where these issues are not present, will be interested in hosting the Games in the future.”

The next European Games in 2023 is going to Krakow and the surrounding Małopolska region. At the deadline a few weeks ago, the Polish city was the only candidate. The official election will take place at an extraordinary EOC General Assembly in Minsk on 22 June.