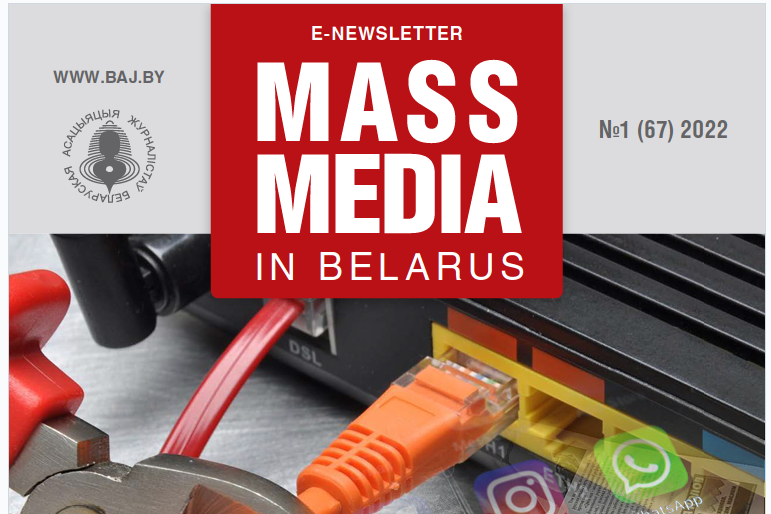 Despite the harsh suppression of peaceful protests after the presidential election in 2020 and the officially declared ‘stabilization’ of internal situation in Belarus, the pressure on independent media and civil society became more intense in the country in 2021. The repressions against non-state journalists and media became systemic. And they were aimed at the actual destruction of independent media sector in Belarus.

Consequently, a lot of independent media outlets were forced to take a decision on relocation and continuation of their activity from abroad. At the same time, they remain a part of the unified media sector of Belarus.

Also, the activities of Belarusian Association of Journalists (BAJ) in defense of journalists’ rights were hampered by the pressure on the part of official authorities.

In February and July 2021, the BAJ office in Minsk and the apartments of its employees were searched. The searches were accompanied by the seizure of documents and technical equipment, the arrest of the BAJ office and bank accounts.

Following a lawsuit filed by the Ministry of Justice of Belarus, the Supreme Court of Belarus liquidated the Belarusian Association of Journalists Public Association in August 2021. The BAJ was liquidated among several hundred other non-governmental organizations named by the authorities as a “tumor that needs to be eliminated”.

Quite a few of BAJ leaders and employees were forced to leave the country for security reasons as well as in order to continue their activity.

The work of independent journalists in Belarus was further accompanied with detentions, searches with the seizure of professional equipment and information carriers as well as with persecution on administrative charges in the form of fines and arrests. The BAJ registered 113 cases of arbitrary detentions of journalists in 2021. Also, there were registered 29 cases, when the journalists were sentenced to different terms of administrative arrest.

The top-level repressions took place in July 2021, when the police and KGB officers conducted 75 searches across the country in journalists’ houses and editorial premises of independent media outlets. 146 searches were registered during the year of 2021 as a whole. As a rule, the searches were grounded on the need of investigation of criminal cases, in particular under article 289 (‘an act of terrorism’) and article 342 (‘organization and preparation of actions that grossly violate public order or active participation in them’).

One of the most serious challenges faced by independent journalists and media workers in Belarus was connected with the unprecedented scale of criminal prosecution. The criminalization of independent media workers’ activities appeared in the forms of applied criminal liability for covering the events that take place in the country and in charges for the allegedly committed economic crimes. More than 60 media representatives were subjected to criminal prosecution during the year of 2021. 32 of them remained in custody at the end of the year.

4 journalists were convicted on criminal charges in 2021.

A journalist of TUT.BY Web-portal Katsiaryna Barysevich was sentenced to six months in prison for “disclosing medical secrets, which entailed grave consequences” under article 178 (part 3) of the Criminal Code of Belarus. (She published information about the death of a peaceful protester Raman Bandarenka that contradicted the official version of his death). The Belsat TV journalists Katsiaryna Andreyeva and Daria Chultsova were sentenced to two years of imprisonment for broadcasting live from the site of the brutally dispersed public commemoration event in memory of Raman Bandarenka in his yard that was regarded by the authorities as the alleged ‘arrangement of actions that grossly violated public order’ (article 342 (part 1) of the Criminal Code of Belarus).

Siarhei Hardziyevich, a correspondent for the independent regional news Web-site 1reg.by from the city of Drahichyn (Brest region), was sentenced to 18 months of imprisonment. He was charged under three articles of the Criminal Code of Belarus – article 368 (‘insult to the President of the Republic of Belarus’), article 188 (‘slander’) and 369 (‘insult to a government official’) for the alleged posting of messages in a local Viber chat.

The ‘Reporters without Borders’ human rights organization labeled Belarus as the most dangerous country for media workers in Europe.

According to the annual report, issued by the Committee to Protect Journalists, Belarus ranked 5th in the world as for the number of journalists in prison. (19 media workers were in jail at the moment, when the report was prepared.)

More details about persecution of Belarusian journalists in 2021 can be found under the link: https://baj.by/en/analytics/mass-media-belarus-e-newsletter-no2-64-2021-persecution-journalists-2021

Application of anti-extremist legislation to restrict freedom of expression

Interference in the journalists’ work by law enforcement agencies was accompanied by the tightening of legal regulation of activities in the field of freedom of expression. In particular, a number of amendments was made to the law “On Counteraction to Extremism”. They expanded the possibilities for holding people legally liable for expression of opinions. The authorities started to apply them frequently in relation to independent media as well. It became a common practice to recognize publications of independent media as “extremist materials”. Consequently, public access to these media in Belarus was blocked, and the Internet users and media citing these materials were held legally liable (even in case the re-posted materials had appeared before the dates, when the media were recognized as extremist).

Restriction of freedom of expression online

The authorities started to regard the Internet as the main source of "oppositional" ideas, which were understood as any point of view that differed from the official one. Since the presidential election 2020, the state has been constantly taking measures to restrict access to information on the Web, among other, by blocking websites of independent media and websites of civil society organizations, forcibly removing critical content, recognizing publications of independent information resources as “extremist materials”, and holding people accountable for disseminating (in particular, re-posting) the “extremist materials”. Since the opportunities to receive information through online media Web-sites were restricted with the blocked public access to more than 100 news Web-resources in 2020-2021, the Belarusian audience started to use more frequently instant messengers, particularly Telegram, and social networks, particularly YouTube.

According to the Freedom House’s global Web freedom ranking, Belarus appeared among the countries with the worst deterioration in Web freedom alongside with Myanmar and Uganda in 2021. Compared to the previous year, the position of Belarus on the list decreased by 7 points. The country received only 31 points out of 100 possible.

More details about restriction of freedom on the Web can be found under the link:

Restrictions on the activity of print media

The Belarusian authorities continued to restrict the activities of independent print media, particularly the media that publish materials on social and political issues. In 2020, the authorities mainly deprived them of the opportunity to print and distribute their circulations. In 2021, the pressure from the internal affairs bodies and the prosecutor's offices as well as prosecution of both the media outlets and their employees were added. Consequently, 7 newspapers and 1 magazine suspended the production of their print versions in 2021. 8 more newspapers haven’t been published since 2020.

The cessation of independent print media publishing after the presidential election in 2020 was accompanied by the emergence of unregistered publications, published by activists. The publications mainly contained reprints of materials from independent news Web-sites. The distributors of these small-circulation newspapers were brought to administrative and criminal liability in January-March 2021.

More details about the pressure on the print media can be found under the link:

FIGURES OF THE YEAR 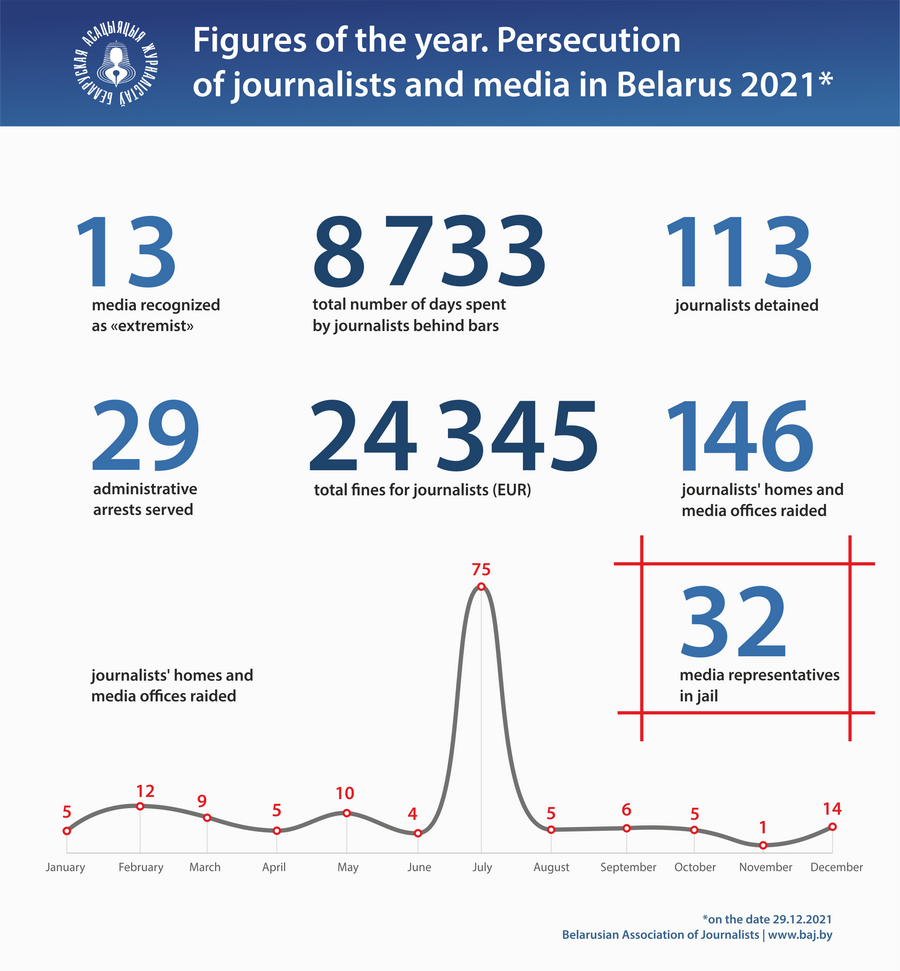 FIGURES OF THE YEAR. Repression of media and journalists in Belarus in 2021