The general situation in the Belarusian mass media field was controversial in the first half-year 2019. On the one hand, it was influenced by the overwhelming trend of reinforcing governmental control over the media space. On the other hand, due to hosting the 2nd European Games, the official authorities were pushed towards greater openness of the country. A complicated foreign policy and economic situation in Belarus, including negotiation processes with the European Union and the United States, the increasing size of external debt and pressure on the part of Russia as well as the approaching elections to the Belarusian parliament (scheduled for November 17, 2019) should be taken into account, too. 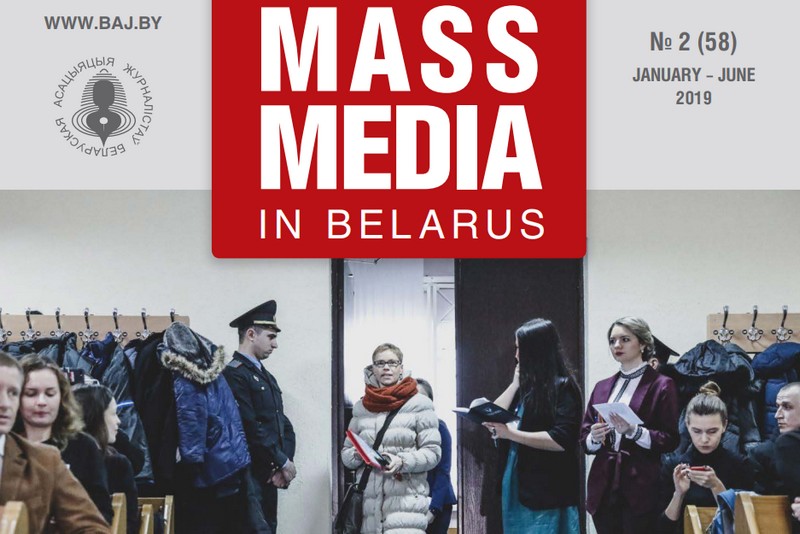 On the eve of the international sport event, a human rights organization Human Rights Watch called upon the Olympic officials to guarantee safety of journalists in Minsk: “Belarusian authorities have carried out concerted attacks on media freedom over the past two years that directly affect the climate in which news media will cover the country before, during, and after the upcoming European Games, Human Rights Watch said today. The European Olympic Committees (EOC) should ensure that all journalists, foreign and local, covering the 2019 European Games in Belarus can operate free from harassment.”

Despite the fears of human rights activists and journalistic organizations, none of serious conflicts related to the implementation of journalistic activities occured during the European Games. Moreover, the pressure on freelance journalists had decreased by the beginning of the international sport event. In particular, such journalists were fined 38 times on court decisions for cooperation with foreign mass media without press credentials within the period since January till the end of May 2019. However, none of such cases have been registered since May 31, 2019.

Nevertheless, the total sum of fines, imposed on journalists on article 22.9 part 2 of the Belarusian Code of Administrative Offenses totaled 35827.5 BYN that equals around USD 18,000.

Paragraph 2 of article 22.9 of the Code of Administrative Offenses envisages legal responsibility for the illegal production and/or dissemination of media products. According to BAJ, journalists cannot be presented the charges, since editorials produce mass media production and press distributors disseminate it. Moreover, the charges violate international obligations of Belarus in the field of freedom of expression.

In most cases, the official authorities prosecute the journalists, cooperating with Belsat TV channel. Being an integral part of Polish TV, the TV broadcaster is promoted as the first independent TV channel of Belarus.

The problem of prosecution of freelance journalists on administrative charges has been included into the agenda of the Dialogue on Human Rights between the EU and Belarus since several years.

Criminal prosecution of journalists and bloggers on different grounds was among the main problems in the field of freedom of expression in Belarus in the first half-year 2019.

The guilty verdict in relation to TUT.BY Chief Editor Maryna Zolatava and completion of ‘BelTA case’

On March 4, 2019, the Zavodski City District court of Minsk found the editor-in-chief of the leading Belarusian Internet portal TUT.BY Maryna Zolatova guilty of inaction as an official (Article 425 of the Criminal Code of Belarus) and sentenced her to a fine of 7 650 Belarusian rubles (about $ 3,800 at the rate of the National Bank of Belarus). Moreover, the court urged her to cover the procedural costs of BelTA, connected with the litigation, in the amount of 6 000 Belarusian rubles (about $3,000).

M. Zolatava’s conviction completed the so-called ‘BelTA case’, which had been filed in the summer of 2018.

The case initiation was caused by the unsanctioned use of passwords to the news string of BelTA state news agency by some journalists. (The BelTA materials could be accessed on the Web-site of the agency free of charge at that. The persecuted mass media published the materials in question with due consideration of BelTA rules. The passwords to the News String weren’t changed by BelTA for years.)

The editorial offices of BelaPAN News Agency, TUT.BY Web-portal and a number of other media as well as private apartments of some journalists, employed by the media, were subjected to searches on August 7-9, 2018.

Professional technical equipment and information carriers were seized during the searches. Around 20 journalists were detained and interrogated by legal investigators. Eight of them were sent to custody for the period of up to three days. Criminal cases were filed in relation to 15 journalists on the charges, envisaged by article 349 part 2 of the Criminal Code of Belarus (‘the unauthorized access to computer information, committed out of mercenary or other personal interest.)

The legal investigators’ actions evoked protests on the part of human rights defenders, journalist organizations and international bodies, including the Council of Europe, the European Union, and OSCE.

The criminal cases against 14 journalists were terminated at the end of 2018. The media workers were brought to administrative responsibility in the form of large fines and actual compulsion to pay compensation to BelTA and the “SB. Belarus today” newspaper, published by the Presidential Administration.

The TUT.BY Chief Editor Maryna Zolatava appeared to be the only convicted person on the ‘BelTA case’, who was brought to criminal responsibility.

“Conviction & fining of Marina Zolotova, editor of TUT.BY, along with disproportionate measures of law enforcement against BelaPAN & TUT.BY agencies in 2018, may exert chilling effect on independent media in Belarus”, noted Harlem Désir, OSCE Representative on Freedom of the Media.

“The way the authorities persisted with this case, which was out of all proportion from the outset, shows their determination to undermine the state media’s rivals”, noted ‘Reporters without borders’ reacting to the court verdict in relation to M. Zolatava.

The Chairperson of the Supreme Court of Belarus Valiantsin Sukala noted that the increased public attention to the trial against Zolatava, including the presence of diplomats and reporters, could be regarded as indirect pressure on the court.

On March 20, the Investigative Committee of Belarus used its official Telegram channel to announce the initiation of a criminal case under article 340 part 1 of the Criminal Code of Belarus on the fact of a deliberately false report of mining a district executive committee in the urban settlement of Aktsiabrski. A local blogger Andrei Pauk was presented as the suspect in the case, since his mobile phone number was indicated in the message about the mining.

A.Pauk was detained on March 20, 2019. His house was searched and his computer and other professional equipment were seized. According to legal investigators, A. Pauk sent an email to the Homiel Regional Branch of the Ministry of Emergency Situations with a message about the mining of the Aktsiabrski District Executive Committee, which is the local governmental authority. A.Pauk was released after the interrogation procedure. The criminal case in relation to him was terminated and all technical equipment was returned to him one month later.

The story with false mining repeated in May 2019. An e-mail message about the ‘mining’ of the court building in the city of Mazyr was received by the Ministry of Emergency Situations. A.Pauk was considered as the suspect on the case, since his mobile phone number was mentioned in the message.

A.Pauk appealed to the Office of Legal Investigation Committee and the Prosecutor General with a request to find the person, who makes use of his personal data to disseminate false messages about the ‘mining’ of governmental institutions.

Andrei Pauk is a famous Belarusian video blogger. He runs the ‘Rudabelskaya Pakazukha’ blog in the social media, where he criticizes the local authorities.

On April 9, 2019, the representatives of Minsk Legal Investigation Department conducted a search in the premises, which are used for their work by the Belarusian team of ‘Belsat’ satellite TV channel. According to the Legal Investigative Committee, the search was carried out in the framework of a criminal case, filed on the fact of libel (part 2 of article 188 of the Criminal Code of Belarus) on the website of ‘Belsat’ TV channel. The ‘Belsat’ management explained that the reason for the initiation of the case was a technical error in a Web-article on the alleged corruption in 2018. Andrei Shved, the chairman of the State Committee of Judicial Expertise, was mistakenly mentioned there.

“We quickly set the record straight, published a refutation and offered our apologies to General Andrei Shved whom the mistake concerned. The Investigative Committee ran a check and found no grounds for criminal prosecution found. However, in January 2018, the Prosecutor’s Office launched a criminal case over the same situation”, noted the ‘Belsat’ management.

The Leninski City Disctrict Court of Brest found a blogger Siarhei Piatrukhin guilty under Art. 188, part 2 (“Slander”) and article 189, part 2 (“Insult”) of the Criminal Code of Belarus on April 18, 2019.

Four officers of the Leninsky City District Police Department of Brest were regarded as victims in the case. The court imposed a fine on S. Piatrukhin in the amount of 360 basic units (9 180 BYN that equals approx. USD 4,600). Also, the judge urged the blogger to cover moral damages to the police officers Siarhei Ihnatsiuk, Dzmitry Yakushevich, Ihar Haliantsich, and Siarhei Tokun in the total sum of 7 500 BYN that equals approx. USD 3,750. Moreover, the blogger was obliged to cover the fees, which had been paid by the victims to their attorneys and the court in the amount of 1 000 BYN.

The criminal prosecution against the blogger was reasoned by the video footage, which had been produced in March 2018 and presented on YouTube. S. Piatrukhin stated in the videos that a number of officers from Leninski City District Police Department had relation to a physical attack on a citizen P. Kaminski, who appealed to law-enforcement bodies with a demand to investigate the incident and told the blogger about it.

14 Belarusian human rights organizations issued a demand before the trial start to terminate the criminal prosecution in relation to S.Piatrukhin. According to them, the persecution was politically motivated and associated exclusively with implementation of his constitutional rights and international norms in the field of human rights and liberties, including the freedom of expression as well as the freedom to collect and disseminate information. On July 5, 2019, the Judicial Panel on Criminal Cases at Brest Regional Court upheld the decision of the first instance court without changes.

Belarus held the 153rd position among 180 states of the world in the annual 2019 World Press Freedom Index, published by the international organization ‘Reporters without Borders’ in April 2019. This year, the country managed to climb two positions higher in comparison with the previous year.

“Belarus’s position in the 2019 World Press freedom Index seems to suggest an improvement but, in reality, it reflects the fact that the situation has worsened dramatically in so many other countries, as well as the fact that the record number of arrests in Belarus in 2017 was not repeated in 2018.”

As before, the international human rights organization Freedom House continued to classify the Republic of Belarus as a non-free, but not the worst case country in its annual Freedom in the World 2019 rating list. However, according to the Freedom House experts’ conclusions, the degree of mass media freedom in Belarus shrank to the minimum level in 2018.

“The score declined from 1 to 0 due to a crackdown on journalists that included new restrictions on online media, a criminal case against journalists accused of illegally obtaining content from the state news agency, and the frequent detention and issuing of fines against reporters in connection with their work”.