THE QUANTITATIVE MEDIA RESULTS OF THE YEAR

24 235 EUR the total sum if fines, imposed on journalists for cooperation with foreign mass media 2017

Fines to Journalists for Violating Article 22.9 of the Administrative Code 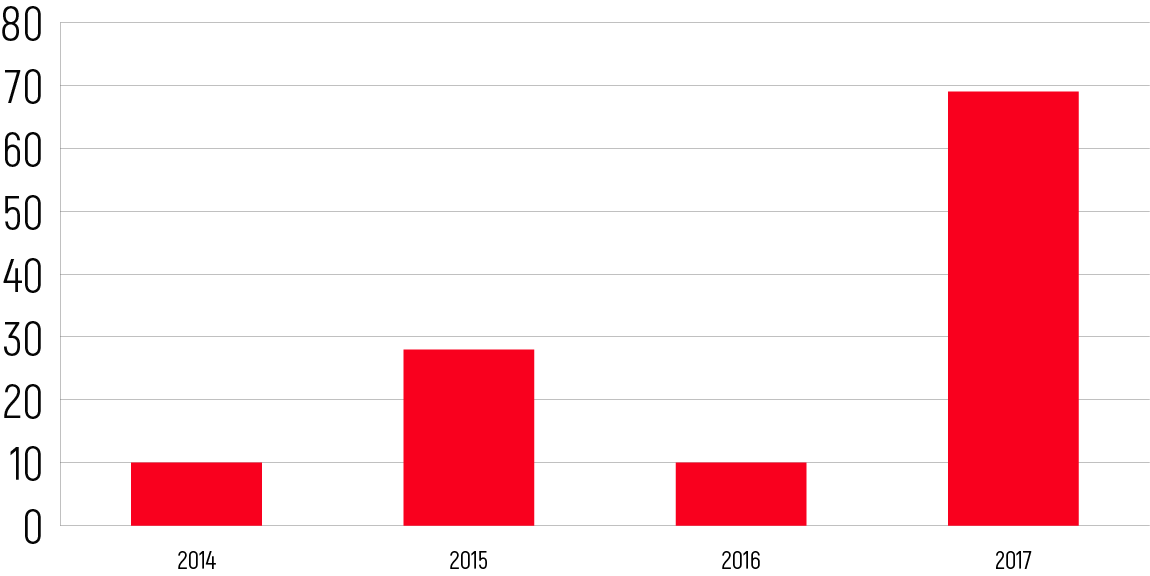 106 the number of decisions, issued by the Ministry of Information of Belarus on blocking access to Web-resources in 2017

194 the total number of decisions, issued by the Ministry of Information of Belarus on blocking access to Web-resources since 2015, when the Ministry was authorized to issue such ordinances

320 the number of information materials with the signs of extremism, found by the National Committee on Evaluation of Information Materials on the Presence/Absence of Manifestations of Extremism in 2017

The declared liberalization of economic and cultural life in Belarus didn’t have any effect on the sphere of expression of opinion and other fields, connected with implementation of civil and political rights in the country in 2017. Moreover, the situation appeared to be one of the toughest for Belarusian independent journalism in recent years. It had been worse only in the post-election year of 2011.

Thus, the Belarusian Association of Journalists registered 13 cases of short-term detention of journalists on duty in 2016
compared to 101 cases of detention in 2017. Also, the journalists were arrested for the period of 10 – 15 days in 10 cases last year. Most cases of detention were observed during mass protest actions in Belarus, which took place in the spring of 2017.

The number of registered cases of detention reduced as soon as the ‘Hot spring - 2017’ was over.

Prosecution of journalists for cooperation with foreign mass media without press credentials resumed after almost a one-year break in March 2017. It continued after the end of protest actions in the country. Consequently, the number of fines, imposed on freelance journalists, drastically increased in 2017 - 69 cases vs. 10 cases in 2016. It was more than during three previous years in the aggregate. The total number of fines exceeded EUR 25,000 in 2017.

The journalists, who contribute materials to foreign media, are fined on the base of police reports, grounded on the arbitrarily interpreted article 22.9 part 2 of Belarus Code ‘On Administrative Offenses’ that provides legal liability for ‘illegal production and/or distribution of mass media products’. The oppressive practice has been registered since May 2014. Journalists
were fined 48 times within the period since 2014 till 2016. In all the cases, it was not the content of their materials, but the mere fact of their appearance in foreign mass media that led to prosecution. In most cases, the journalists cooperating with Belsat TV channel were persecuted. It is worth mentioning that ‘Belsat’ is a constituent part of Polish Public TV company (TVP). However, it positions itself as the first independent TV channel of Belarus.

On April 3, 2017, the Belarusian Association of Journalists adopted a statement that connected the searches and the seizure of technical equipment with the intention of governmental authorities to hamper the independent TV-reporters’ activity in Belarus and terminate any attempts of independent reporting from mass protest actions.

The accusation of illegal cooperation with foreign media without accreditation was stated in the criminal case against three Belarusian authors of a number of Russian media Yury Paulavets, Dzmitry Alimkin, and Siarhei Shyptenka (the so-called ‘Regnum’ authors’ case), too.

Initially, they were charged with inciting ethnic hatred (part 3 of Art. 130 of the Criminal Code of Belarus) that could result in 5 to 12 years of imprisonment. The criminal case was filed by the Legal Investigative Committee, following a claim from the Ministry of Information of Belarus on the presence of extremist materials in the authors’ publications.

Subsequently, two of the defendants were additionally charged with conducting illegal business activities, to which the legal investigation equated receiving honoraria from the editorials of Russian mass media. (However, the public prosecutor excluded the article from the list of charges later on. It was done for the lack of evidence, proving the receipt of sums by the defendants.) The case was referred to court in October 2017. The defendants spent more than a year in jail before trial, i.e. since the moment of detention in December 2016.

“The posts of these three bloggers are controversial but that does not justify their imprisonment,” noted Johann Bihr, the head of RSF’s Eastern Europe and Central Asia desk. “According to international standards, their provisional detention is neither necessary nor proportionate.”

The Minister of Information of Belarus was changed on September 28, 2017. The decision preceeded the date, when the ‘Regnum authors’ case’ was passed to court.

Aliaksandr Karliukevich was appointed to hold the position of the Minister of Information of Belarus. Unlike his predecessor Liliya Ananich, A. Karliukevich had rich experience of journalistic and editor’s work in the past.

The Minister A. Karliukevich noted in his first public speech on the ‘Belarus -1’ national state TV channel that a new version of the law ‘On Mass Media’ was developed. According to the governmental official, it was aimed at ensuring the state regulation of Web-resources and social media.

The ‘Belarusian Partisan’ (www.belaruspartisan.org) popular social and political Web-site was blocked for access from Belarus without any court decisions shortly afterwards. It should be mentioned that the Web-resource was founded by a famous journalist Pavel Sheremet, who was assassinated in Kyiv in 2016.

It is suggested that public access to the Website was disabled on the territory of Belarus subject to the readers’ comments on its pages. Consequently, the Web-site owners changed the domain zone and switched off the commentary option on the Web-resource. Currently, the access to www.belaruspartisan.by remains open.

The return of nine independent printed periodical editions to the state-owned press distribution monopolist networks was the main positive result of 2017. It should be reminded that all of them had been ousted from the ‘Sayuzdruk’ newsstalls and ‘Belposhta’ subscription catalogues 11 years ago.

The return of the periodicals to the state-owned press distribution systems was an immediate outcome of a meeting between Iosif Siaredzich, the ‘Narodnaya Volia’ newspaper’s Editor-in-chief and the President Aliaksandr Lukashenka that took place in February 2017. During the meeting I. Siaredzich passed a list of nine periodical editions to the head of state, noting that these periodicals couldn’t get into this or that state-owned monopolist press distribution network. The President promised to solve the problem.

It is worth mentioning that 20 independent social and political newspapers were excluded from the state-owned press distribution networks on the eve of a presidential election campaign 11 years ago. The ‘Belposhta’ National Unitary Enterprise refused to include the periodical editions into the subscription catalogues and the ‘Sayuzdruk’ enterprises refused to sell them at newspaper
kiosks. As a rule, the termination of contracts with the editorials of independent newspapers was arbitrarily motivated by economic inexpediency.

Consequently, nearly a half of these periodicals left the print media market in Belarus.

Against the background of warming relations between Belarus and the EU in 2008, the ‘Belposhta’ and ‘Sayuzdruk’ enterprises resumed cooperation with ‘Narodnaya Volya’ and ‘Nasha Niva’.

At the same time, quite a few of other discriminated periodical editions from the list stopped their existence by 2017.