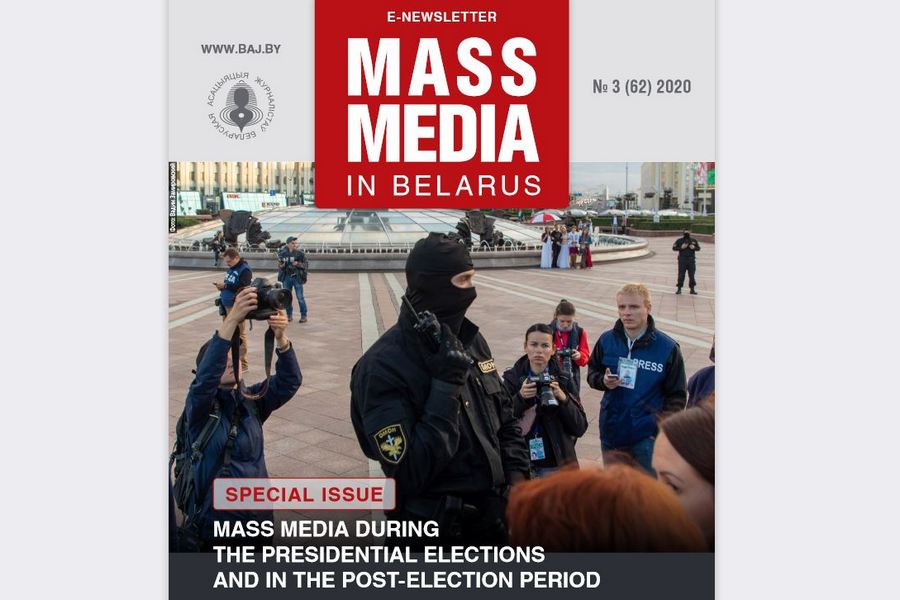 The Presidential elections in Belarus were announced on May 8th and ended on August 9, 2020.  Mass protest actions started in the country as soon as the Central Election Committee announced their official results. The protest actions were severely suppressed by security forces. Over 7,000 people were detained during the first three days of protests. Quite a few of them were subjected to cruel and humiliating treatment. It evoked a new wave of protests that has been lasting for three months. The participants of protest actions urge the authorities to conduct new elections, to release political prisoners from custody, to terminate violence and punish the people, who are guilty of its use.

The official authorities reinforced abruptly their pressure on mass media, journalists and bloggers during the election campaign. Since the beginning of 2020 till May 8, when the elections were appointed, the Belarusian Association of Journalists registered 23 cases, when journalists’ rights were violated. At the same time, the BAJ Monitoring Service registered over 400 cases of the kind after the date till October 25, 2020.

The overwhelming majority of attacks on journalists happened during the post-election period. The representatives of law-enforcement agencies acted as aggressors practically all the time.

The arbitrary detentions and arrests of journalists were often accompanied with the use of force and resulted in damage and seizure of professional equipment, as well as deleting of prepared video-materials.

Three female journalists were injured with rubber bullets during implementation of their journalistic duties.

Other gross violations of freedom of expression, connected to the election campaign and follow-up protests, included:

The journalists and mass media faced the harshest violations of their rights during the post-election period, while covering the protest actions. The BAJ registered over 300 cases of detention of journalists for implementation of their professional duties within the period between August 9, 2020 and October 25, 2020. The journalists suffered from violence at the moment of detention and the consequent tortures in 57 cases. The arbitrary detentions took place in Minsk and practically in all regions of Belarus.

At least three cases of the use of firearms against the female journalists, who covered the protest actions, were registered in Minsk.  Consequently, the journalists were badly injured that led to their long treatment in hospital.

Emilie van Outeren, a correspondent of nrc.nl media outlet from the Netherlands was injured while covering the protests on August 9th.  She was wounded in the thigh by an unknown shell.

A journalist of ‘Nasha Niva’ Natalia Lubneuskaya was wounded by a rubber bullet, when one of law enforcement officers stopped 10 meters from a group of journalists in blue ‘Press’ vests and shot the reporter in the leg. The reporter’s medical treatment took more than a month. A journalist Iryna Arakhouskaya was wounded by a rubber bullet, while reporting from a quarter close to ‘Pushkinskaya’ metro station in Minsk.

The police was deliberately targeting journalists in many cases. Thus, the law enforcement officers detained no less than 47 journalists, including foreign reporters, in Minsk and Brest on August 27, 2020. All of them were taken to district police stations. The police was deleting the filmed materials and threatening to damage or destroy the journalists’ professional equipment.

The police detained six reporters of TUT.by, BelaPAN News Agency, and ‘Komsomolskaya Pravda in Belarus’ newspaper on September 1st.  The journalists performed their professional duties, representing the officially registered media in the country. They wore vests with the ‘Press’ inscription and had badges and official IDs with them. Nevertheless, they were accused of participating in an unauthorized mass protest action and taken into custody, where they spent the night before the trial.

The courts returned the police reports concerning the journalists twice for revision. Nevertheless, the detained reporters weren’t released from custody. All of them were taken to a pre-trial isolation ward, and consequently, the court found them guilty and sentenced to 3 days of arrest, which they had already spent in custody by then.

The courts sentenced journalists 48 times to 3 – 15 days of arrest on the alleged administrative charges in the post-election period.

Almost all court judgements were passed on the basis of witness statements by police officers, whose personal details were often classified and whose faces were hidden. Their testimonies often contradicted the documents provided on the journalists’ status as well as video materials and eyewitness evidence. A journalist Alina Dounar, 23, spent 30 days in custody. She was sentenced to 15 days of arrest immediately on spending 15 days of arrest on the first court decision.

The Internet was practically blocked in Belarus on August 9-12, 2020. The problems with access to the global Web continued till the end of October 2020.

Since the beginning of August 2020, most Web-sites that independently reported on the socio-political situation in the country have been blocked. The legal procedure was bypassed at that. Thus, despite the absence of legal decisions, the Web-site of Belarusian Association of Journalists couldn’t be accessed by Web-users in Belarus on August 9-27, 2020.

On August 21 and 28, 2020, it became known that the Ministry of Information of Belarus took a decision to restrict access to more than 70 Web-resources, allegedly, ‘containing calls and used to coordinate the activities on arranging mass disobedience to the official authorities’, and having ‘a number of publications that negatively show the situation in Belarus after the end of the electoral campaign and discredit the activities of governmental authorities, including the law-enforcement agencies’.

On September 18th, the Ministry of Information of Belarus appealed to the Economic Court with a claim to deprive the largest Belarusian Web-portal TUT.by of its media status. The claim was grounded on the previous four warnings, issued by the Ministry of Information to the online media, for the alleged ‘violation of Mass Media law’. It should be underscored that the warnings were issued by the Ministry of Information of Belarus and that the alleged facts of breaking the law by the online media editorial weren’t confirmed by court. Moreover, the deadline for appealing three warnings in court didn’t expire at that moment of time. On September 29, 2020, the Minister of Information of Belarus Ihar Lutski decided to suspend the release of TUT.BY online media without any court decisions since October 1, 2020 till December 30, 2020. The decision didn’t entail the restriction of access to the Web-portal. However, it deprived the TUT.BY correspondents of their journalistic status that made their activity more complicated.

On October 20, 2020, the Court of the Central City District of Minsk ruled on the recognition of the popular Telegram-channel NEXTA-Live and the NEXTA logo as extremist materials. According to the court decision, certain publications, which are published in the channel, contain calls to mass riots.  NEXTA is an independent online news resource that gained popularity after the recent presidential elections. It distributes the materials and messages, which are related to the peaceful protests in Belarus.

Obstacles to Printing and Distribution of Independent Newspapers

Since the end of August 2020, the state printing houses have refused to print non-state newspapers — ‘Narodnaya Volya’, ‘Komsomolskaya Pravda in Belarus’, ‘Svobodnye Novosti Plus’, and ‘BelGazeta’ — on spurious grounds.

‘Narodnaya Volya’ and ‘Komsomolskaya Pravda in Belarus’ redirected their orders to printing houses outside Belarus. However, despite the presence of running contracts, the state-owned ‘Belposhta’ and ‘Belsayuzdruk’ enterprises, which are de-facto monopolist press distributors by subscription and through a network of news stalls, refused to distribute the mentioned publications under different pretexts.

At least 100 journalists of foreign media who applied for accreditation to the Ministry of Foreign Affairs before the presidential elections did not receive a response within the time limit established by law, under the pretext that the Foreign Ministry's accreditation commission could not hold a meeting due to COVID-19. Consequently, the correspondents never received the press credentials and were unable to work legally in the country.

At least 50 foreign journalists were banned from entering Belarus in August 2020. Thus, according to the official press release of the State Border Committee, 17 representatives of foreign media were denied entry to the Republic of Belarus at the ‘National Airport Minsk’ checkpoint on August 18, allegedly, ‘due to the lack of accreditation for carrying out journalistic activities on the territory of our country’. Some of the foreign correspondents who worked in  Belarus without accreditation were detained and subsequently deported with a ban to enter the country for several years.

The Ministry of Foreign Affairs of Belarus canceled the accreditation of all foreign journalists on October 2, 2020. The decision was explained by the development of new Provisions on Accreditation.

Information on the human rights situation (including the situation with FoE) in the post-election period is also presented in the “Belarus after the elections” joint report of human rights organizations.