“Belarus has become one of the most dangerous countries for journalists.” Interview with Jeanne Cavelier representing Reporters Without Borders

In the World Press Freedom Index, Belarus ranks 153 out of 180. In terms of the number of journalists in detention, it is one of the five countries with the worst situation in the world. Both rankings are based on the findings of Reporters Without Borders. In an interview with BAJ, Jeanne Cavelier, head of this NGO’s Eastern Europe and Central Asia Desk, shared how the situation in Belarus is currently assessed. 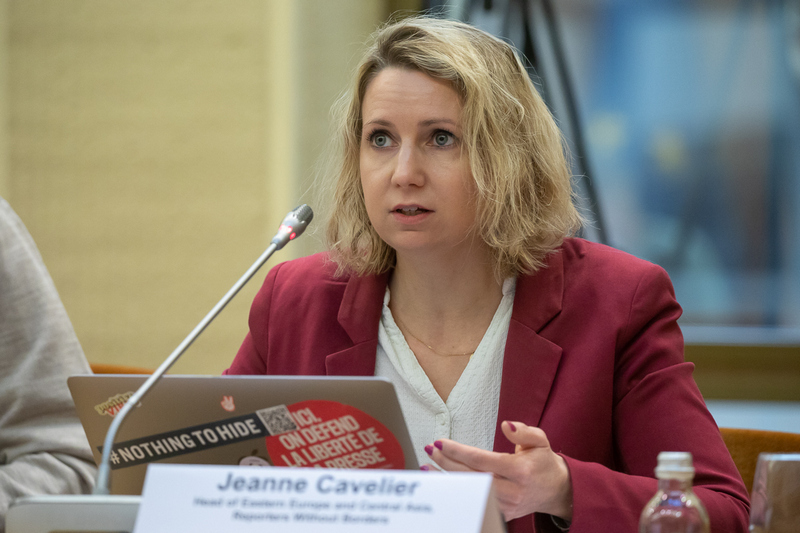 32 Belarusian journalists are in custody. The situation is only worse in China, Myanmar, Vietnam, and Iran

— Before 2020, independent journalism experienced some discrimination from the state agencies. After the mass protests, it turned out that it could be much worse. How do you assess the situation with press freedom now?

— Belarus has become one of the most dangerous countries for journalists in the world. Its position at the bottom of the Press Freedom Index means that the situation is extremely serious.

This rating is based on five key indicators: political, economic, socio-cultural, legal context, and violence against journalists. Regression has been observed on all counts.

We see that harassment of journalists continues, including searches of their editorial offices and homes. As a result, many reporters cannot continue their work without risking detention. The websites and social media of most independent media outlets are declared extremist.

Special mention should be made of the unprecedented forced landing of the plane and the detention of Raman Pratasevich.

In terms of the number of imprisoned press members, Belarus is one of the five worst countries in the world. The situation is even sadder in China, Myanmar, Vietnam, and Iran.

— Did you see the preconditions for such a development?

During mass demonstrations, the authorities were afraid of the spread of truthful information. They were afraid that more people would join the protest movement.

. We hoped that this would change. But things only got worse and worse.

— And not only in Belarus…

— Yes, as we can see, the situation regarding freedom of speech has deteriorated rapidly throughout the region. Journalists are repressed and imprisoned in Russia as well.

Following the invasion of Ukraine, reporters there were literally hunted down: eight media workers were killed while performing their professional duties, and seventeen were injured. This is an extremely bad situation.

How can we help? We support some two thousand journalists, in particular, by providing reporters with bullet-proof vests and other equipment. Shortly, we intend to send generators and other portable devices to charge laptops, phones, and cameras to enable the continuation of uninterrupted work.

We have recently received a request from Belarusian journalists in Ukraine who need to be relocated. We are providing the necessary support in this matter.

We also help to obtain visas for those who want to leave Belarus.

A fund has been started for journalists working outside Belarus. With this funding, the media can continue their work. 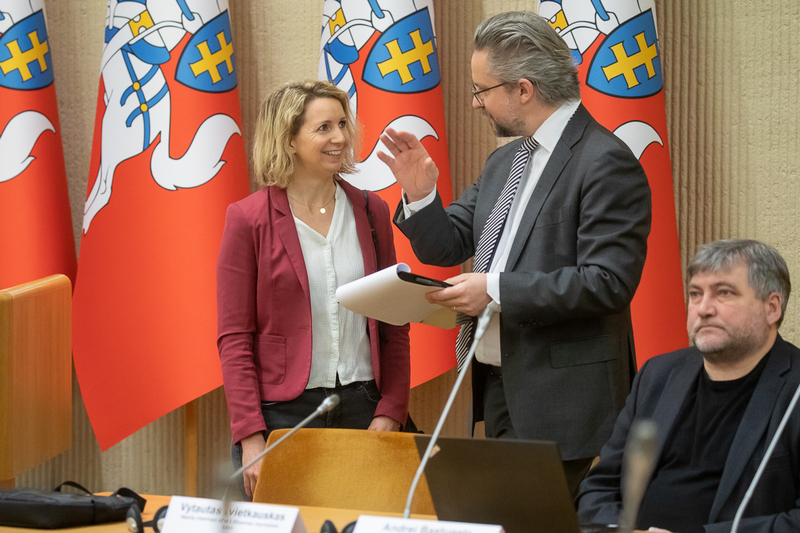 Moreover, technical, legal, educational, and psychological support is provided. In particular, technology is being created to avoid blocking sites, plus we provide access to VPN services.

“In the news agenda, Belarus has faded into the background”

— It was to be expected that the attention of the whole world is now drawn to the war in Ukraine, while the Belarusian agenda has been relegated to the back burner. Isn’t this a factor contributing to an even deeper plunge into the crisis?

— We are very concerned about the situation in Belarus, Russia, and Turkmenistan. We believe that these countries have a lot in common, including attitudes toward freedom of speech.

At the same time, we note that in the news agenda, Belarus has faded into the background.

When covering the situation in the media, the connection between Belarus and Russia should always be pointed out for a better understanding of the situation by the audience.

At the same time, we strive to make sure that Belarus is not forgotten. Wherever we can, we disseminate information about the repression of journalists and report on the situation with freedom of speech.

In particular, we prepared a report on journalists continuing their work in exile.

We have been in discussions with the UN Secretary-General for several years about creating a new position – a UN representative for the safety and rights of journalists.

We also believe it is necessary to focus on crimes against journalists. The perpetrators must be punished.

We filed seven complaints about violations of journalists’ rights. These documents were sent to Lithuanian law enforcement authorities. One of the accusations concerns Lukashenka, who, in our opinion, was involved in the forced landing of the plane and the illegal detention of journalist Raman Pratasevich.

— Has there been any progress on the investigation in Vilnius?

— Two days after Raman Pratasevich’s detention, we filed a complaint with the Lithuanian law enforcement authorities, as that country’s court has the relevant international competence.

We had a meeting at the state prosecutor’s office. They heard our arguments and expressed interest in the investigation, which is still ongoing.

“Independent journalism, both inside and outside the country, is needed to restore peace”

— There is an opinion that the Belarusian regime, just like the Russian one, could not care less about the criticism from the international community. Is there any potential for improving the effect?

— The most effective pressure on Belarus would be, of course, from Russia. But we understand that it is impossible right now.

True, Western sanctions are not always well-started, and that is a big problem. There is still work to be done in this respect. But if we stop taking action on that front, it will only get worse. Who is going to do it? 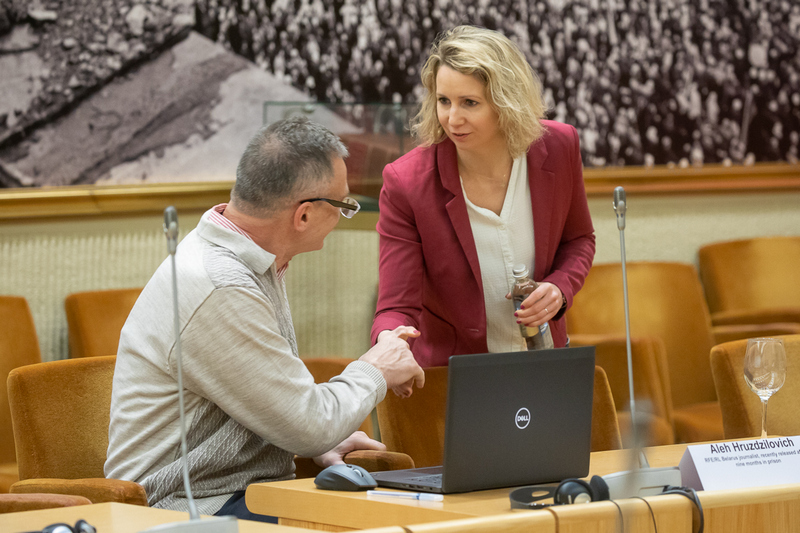 We do not know when the war in Ukraine and repression in Belarus will end, but we have to understand that it is very important to keep exerting pressure on Lukashenka's regime. He must not forget that we monitor his actions, see and record what he does, how he treats people in detention, and how he violates freedom of speech.

— Don’t you think we are witnessing a major crisis of international organizations? What is their role now?

— Our organization is not very well-funded. The available resources enable us to help journalists with relocation and finances for starters.

That is, we are talking about emergency aid, which is not enough for sustainable journalism.

However, we intend to keep supporting reporters, both those who remain in Belarus and those who have left the country, because we understand how difficult it is to be away from sources of information, to overcome administrative problems, and to be separated from their families.

— Do you think it’s a shame for Europe to have a neighbor like Belarus with its current regime?

— Yes, and that’s why I think European countries should do everything possible to help and welcome independent journalists.

— They have to! If they don’t, the reporters won’t be able to work and it will be difficult to rebuild independent journalism, and therefore civil society, later on.

Journalism is the basis for democracy. Independent journalism, both inside and outside the country, is needed to restore peace.

Ultimately, this benefits not only the neighbors but also the rest of the countries in the region.

— How do you see the way out of this crisis?

— If the regime changes to a democratic one, journalists can go home, and I think they will. I know that many want to continue working in the profession. It is going to be an opportunity for media development.