09.08.2018 Source: Press service of the Belarusian Association of Journalists

ARTICLE 19 condemns the recent wave of police raids on independent media outlets in Belarus, resulting in the detention of several journalists, at least seven of which remain in detention. We call on the government of Belarus to immediately and unconditionally release all detained journalists and to refrain from further harassment. 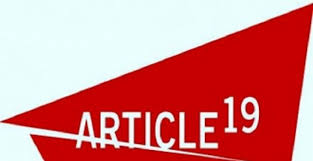 “The raids are clearly aimed at silencing Belarus’s beleaguered independent media”, said Katie Morris, Head of Europe and Central Asia at ARTICLE 19. “The allegations, which are already dubious, would not warrant such repressive actions, and merely seek to scare those daring to undertake critical reporting in a country where dissent is seen as criminal”, she added.

On the morning of 8 August, law enforcement entered the flat of freelance media experts and journalists Olga and Paulyuk Bykouski with a search warrant.

On 9 August, the Investigative Committee stated that of another journalist, Iryna Leushyna, editor-in-chief of BelaPAN, is also being questioned.

It is believed that the Belarusian Investigative Committee have initiated a criminal case against the journalists under Article 349(2) of the Criminal Code, which criminalises “unauthorized access to computer information, made out of personal interest, which caused significant harm”. According to the authorities, the journalists were illegally using a paid-subscription account for the government news agency BelTA. News at BelTA is limited to subscribers only for the 15 minutes after being posted. BelaPAN claims that there was no need for their agency to get access to paid sources of BelTA, and that they never used BelTA sources without citation.

We urge the government of Belarus to immediately and unconditionally release all journalists detained on questionable allegations for exercising their legitimate rights to freedom of expression, and to end all forms of harassment against journalists, including raids on independent media outlets.